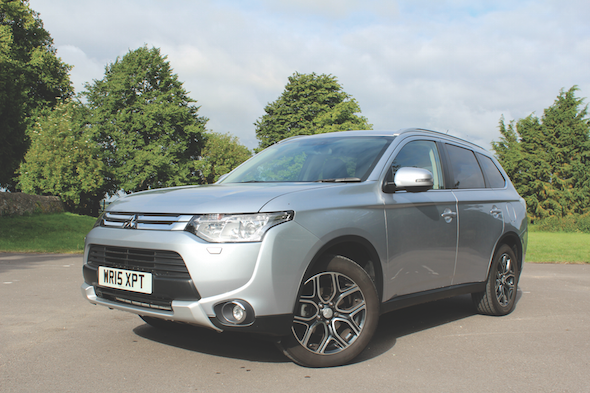 Plenty of seats, gadgets galore and great mpg – that's why I like Dannii so much more than Kylie. AOL Cars welcomes the Mitsubishi Outlander to the fleet...

The latest vehicle to join the Car Dealer fleet is the Mitsubishi Outlander diesel – the Dannii Minogue of the Outlanders which lives in the shadow of its more successful sibling, the PHEV.
While the hybrid version might be all you hear about at the moment, the diesel still has plenty to offer, starting with two more seats that pop up in the spacious boot.

That extra row of seats has already come in handy on a number of occasions. Among them was a night out with some former newspaper colleagues. I'm not sure what the collective noun is for a group of hacks – and I won't invite suggestions – but the point is the Outlander meant we needed to take only one car. We also managed to squeeze two families into it for a day out, including two child seats when again the alternative would have been a more costly trip in two cars. Very handy indeed.

Our model comes with a load of gadgets, including a multi-select four-wheel drive system, auto stop and go and DAB radio. And, of course, it's got a Euro NCAP five-star safety rating.

The automatic boot is one thing I've really come to appreciate, especially when it makes that loud beeping noise as I open it before leaving for work at 6am while my neighbours are still in bed. Having said that, I did manage to accidentally open it by banging the button with my knee while parked up and on the phone, scrabbling for a pen, so it's not entirely idiot proof.

The boot isn't the only thing that beeps at you but, those noises aside, it's a quiet and refined drive, with a nice finish to the interior. The sat- nav is not quite as user-friendly as the one in the ASX, but once you get the hang of it, it's actually got some clever features.

And the green leaf challenge, which displays how economically you have driven at the end of each journey, has become an addictive game that's turned me into a more eco-friendly driver.
The extra seats in the diesel version and the mpg on the sort of driving I do, which is mainly long journeys bombing all over the country, make this car a winner.