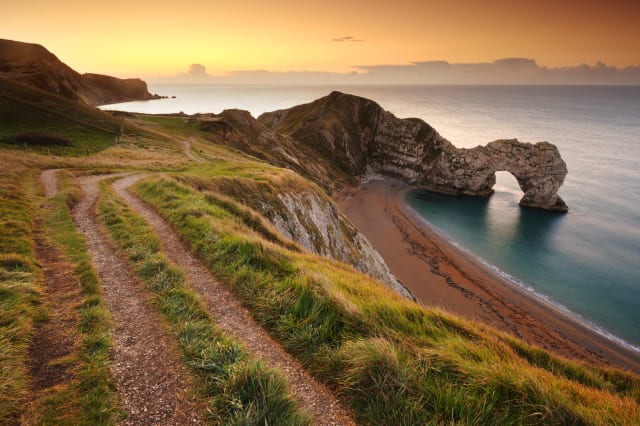 What is it about the British coastline that makes us so misty-eyed and poetic?

To find out, the National Trust has teamed up with a world-renowned wordsmith to bring us a lovely little poem about the British seaside.

It called on the British public to share their favourite things about our pleasant land's coastline, and used more than 11,500 submissions under the hashtag #lovethecoast to inspire the poem, which was written by Dr John Cooper Clarke.

Seventeen of the contributors were invited to read out lines of the poem, while Dr John began and ended the ditty.

See the whole poem here. (Warning: It may make you go all bleary eyed and nostalgic for sand castles.)

Here's the poem in full:

Nation's Ode to the Coast, by Dr John Cooper Clarke

A big fat sky and a thousand shrieks
The tide arrives and the timber creaks
A world away from the working week
Ou est la vie nautique?
That's where the sea comes in...

Dishevelled shells and shovelled sands, Architecture all unplanned
A spade 'n' bucket wonderland
A golden space, a Frisbee and
The kids and dogs can run and run
And not run in to anyone
Way out! Real gone!
That's where the sea comes in...

Now, voyager – once resigned
Go forth to seek and find
The hazy days you left behind
Right there in the back of your mind
Where lucid dreams begin
With rolling dunes and rattling shale
The shoreline then a swollen sail
Picked out by a shimmering halo
That's where the sea comes in...

"Certain seaside towns have just about everything. Blackpool has more than everything: three piers, miles of hotels, and the iconic tower."

Mr Punch and his wife have been entertaining the English holidaymaker since 1662, and he's still going strong.

At 335ft long, Cleethorpes Pier is one of the shortest in the UK. This, year, it was sold to a venture partnership for more than £400,000.

"Lifts, trams, railways, funiculars, call them what you will, are a marvellous way to get from up there to down here and from down here to up there."

"Everyone loves a fishing boat - especially it it's wooden and being freshly painted by an old tar... along with the decline of deep-sea fishine, there has been a gradual disappearance of local fish shops, the transformations of fishermen's stroes and net shops into holiday homes, the construction of yachting marinas and the filling of harbours with pleasure craft."

"Arcades, pleasure domes, sideshows, ghosts and ghouls, crazy houses, laughing clowns, a peppering of the surreal, the unusual and the bizarre."

"Once one of the icons of the seaside amusement park, the old-style helter-skelters are fast disappearing. Only around three or four seaside helter skelters remain."

One of the Britain's many quirky places to stay, this romantic little place comes complete with its own drawbridge.

"Busy beaches are for kids to play on and for mum and dad to read the newspaper."

"George Bernard Shaw once wrote: "'Heaven, as conventionally conceived, is a place so inane, so dull, so useless, so miserable, that nobody has ever ventured  to describe a whole day in heaven., though plenty of people have described a day a the seaside.'"

"Lighthouses have gradually become less important to navigation with advances in global positioning technology. Automation has led to the loss of the lighthouse keeper, although someone must still be on hand to change the bulbs."

People have been taking in the sea air and enjoying the pleasures of the North Pier since it opened to the public in 1863.

"What can be the origin of the beach hut? Some suggest that "bathing machines" were re-used as changing rooms and then developed into picnic and sun rooms... If you like to sit in a musty, damp box full of yesterday's furniture and smelling of butane gas, listening to the rain on the roof and doing that wretched jigsaw with the missing piece, then this is for you."