Man chooses to leave troubles behind and live in Prius 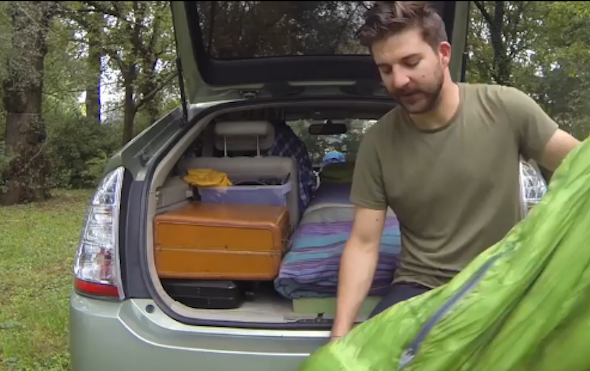 The incredible story of how one man decided to live in his car has been showcased through a remarkable video.

After having his car broken into and his valuable items stolen, including his work information-filled laptop, Chris Sawey was finding it difficult to find a job.
Rather than giving up, Sawey instead chose to improvise - and live in his car. Choosing only the most important items, Sawey left for the road with his entire life packed inside the cabin of his Toyota Prius.

Sawey managed to fit a bed, an area to store clothes, a desk and a foldout camping table all within the car. He even installed a solar panel on the roof to be able to charge his phone.

Travelling across America, Sawey found the experience liberating rather than restricting. Rather than being tied to one city, he was able to travel wherever he fancied, for either a job or out of interest.

Picking up only a few parking fines along the way, Sawey soon found the best places to leave the Prius. Showering in gyms and utilising their Wifi, he soon became well-suited to life on the road in 'Hotel Prius'.

The video shows his progression from a period of depression to working his way out of it, and into prosperity. Working as a waiter trainer, he was able to make money whilst also still fulfilling his desire to travel.

Do you think you could live a life on the road and in the back of your car? Let us know in the comments below.