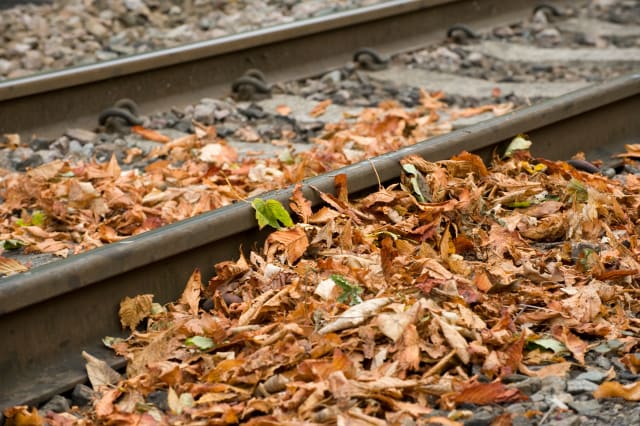 Rail delays caused by the dreaded problem of "leaves on the line" could be reduced by a system of electromagnets, an engineering company has claimed.

Thousands of tonnes of leaves fall onto railway lines across the country each autumn, forming a slippery layer when compressed by passing trains.

SEE ALSO: Commuters fined after being forced to stand in first class on overcrowded trains

This causes delays as drivers have to brake early to ensure they stop in time, and accelerate more gently to avoid wheel spin.

But Cambridgeshire-based firm Mole Solutions believes it may have devised a process which could solve the problem.

Their proposal involves installing electromagnets and speed sensors onto train tracks. When a train is found to be travelling too fast, the system slows it down by creating an opposing force between the magnets and a metal plate underneath the train.

Bob Silverthorne, development director at Mole Solutions, explained: "When a train is coming into a station you want to see it slowing down at a certain rate.

"You measure its speed and compare that to the rate it should be slowing down. The difference is programmed into the electromagnets to add the extra braking that's required."

Mr Silverthorne said the project - which is three months into a feasibility study - would improve timetables and capacity by allowing operators to run services closer together.

"This would bring a great benefit," he added.

"We have to stack up the cost of a system like this against the cost of delays on the network."

Mr Silverthorne claimed the technology could be introduced on the railways within four years.

Each autumn Network Rail deploys up to 55 special trains and 80 teams who work around the clock to keep tracks clear of leaves.

Railway historian and author Christian Wolmar told the Press Association that leaves on the line "is not a joke issue".

"There have been trains that have sped through stations," he said.

"It's a surprisingly difficult issue.

"I know people laugh about it but if you leave the leaves there and don't take them away they form this black mulch. What little adhesion there is between the wheels and the track disappears."

The use of electromagnets is one of a number of projects which received development funding from the Rail Safety and Standards Board.

It launched a competition to find novel, technical solutions to increase braking performance independent of the contact between wheels and rails.

One in four commuters admit to fare dodging