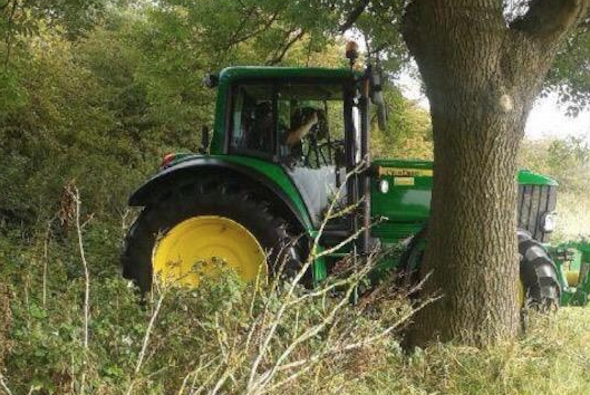 It would appear that Yorkshire forces are getting a little crafty when it comes to cracking down on speeders. Either that, or they've decided to take a spontaneous walk with nature on their lunch break.

The new speed trap tactic surfaced when Twitter user Andrew Thompson posted two photographs of a Humberside policeman hidden inside a stationary John Deere tractor parked on a grass verge in Sledmere, East Yorkshire, along with a mounted camera.
The operation has been setup to catch rural offenders, as Humberside Police aim to further reduce the number of 'high-end' speeders. Operation Kansas sees officers climbing on board unmarked vehicles, such as tractors, to monitor the country roads in the East Riding area.

"This Operation runs alongside the well-established and much publicised Operation Achilles, it is concerned with 'high-end' speeding offenders in the East Riding, deploying speed cameras, which are located in a variety of stationary vehicles.

"Vehicles, which are detected travelling at very high speeds, are stopped further along the road and drivers/riders are spoken to and dealt with at the roadside.

"Although the majority of offenders are motorcycles, a number of cars are also dealt with on this operation. We regularly record speeds in the high 90s and over 100 mph, these being on country roads where the National Speed Limit of 60mph is in force.

"It goes without saying that such speeds on these roads are inherently dangerous, particularly when you consider how many side roads and field entrances there are."

Hughes continued: "This Operation is aimed at the small percentage of riders/drivers, who insist on driving at dangerously high speeds on our country roads, not only endangering themselves, but other innocent road users."

Speeders won't be able to dodge those speed traps quite so well now...