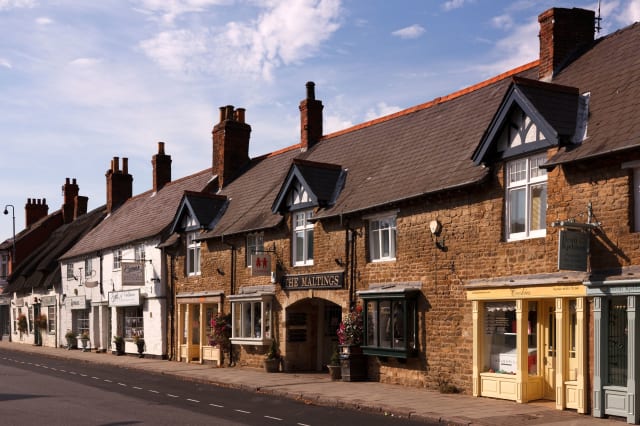 An earthquake with a magnitude of 2.8 has been recorded in Rutland.

The epicentre of the quake was north of Oakham (pictured) , with residents also reporting feeling the tremor in Northamptonshire.

The British Geological Survey said it measured 2.8 on the Richter scale and struck at 10.40pm.

It's the second time this year the area has been shaken by tremors, with a 3.8 magnitude earthquake recorded in January.

People who felt the quake on Tuesday night tweeted their reactions.

Harriet Brookes tweeted: "Another earthquake! Why do we seem to have so many recently?"

Clive Loader said: "Wow - just had another earthquake here in Rutland. Perhaps not as strong as ones over the last couple of years, but still quite a sensation!"

And Andy Sawford, former Corby MP and now runs a communications agency, said: "Another earthquake round our way last night. I felt it at the time and thought it was unusually powerful for a HGV rumbling past."

Emergency services have not reported any casualties or damage to property.

Tehran sits on one of the most dangerous fault lines in the world —the North Anatolian fault. The entire population of the city is heavily exposed to earthquakes.

Los Angeles, like much of California, sits along the San Andreas Fault, making it one of the most earthquake prone places in the world. 14.7 million people are at risk directly of earthquakes at any given time in the city.

Shanghai, China's most populated city, is located on the Yangtze River Delta, making it vulnerable to serious flooding from storms and typhoons. Its long coastline and the large volume of water flowing through the city makes it especially at risk.

Kolkata is situated near the world's largest river delta, which makes it susceptible to flooding nearly every year. The drainage system, which is more than 140 years old, covers less than half of the city. Cyclones, tsunamis, and storm surges could also affect the city, which is ill-prepared to deal with a natural disaster.

Many of Japan's major cities are situated directly along the Ring of Fire, a continuous series of  active fault lines that account for 90% of the world's earthquakes. Tsunamis, caused or compounded by earthquakes, are a major risk in Nagoya, where they have the potential to be devastating.

A lack of planning can exacerbate the effect of natural disasters, a phenomenon which has taken root in Jakarta. Wet season rains, insufficient drainage, and the fact that 40% of Jakarta is below sea level ensures that the city commonly experiences floods.

The government agreed to build 2 dams this year to ease the issue, but that does nothing to ease the other dangers that Jakarta faces — namely earthquakes. Situated near a fault line, Jakarta is prone to earthquakes, which are magnified by the soft, poorly drained soil.

In 1995, the Great Hanshin earthquake devastated the Osaka-Kobe area, killing more than 6,000 people and causing $100 billion in damage. Another earthquake like that could easily hit again in the future and the city wouldn't be much more prepared. Because the city is on a coastal plain, the area is vulnerable to storm surges and ranks third for cities at risk of tsunamis.

The urban density of the Pearl River Delta is unprecedented. Centered on vast flood plains are the massive cities of Shenzhen, Hong Kong, Dongguan, Macau, and Ghangzhou. The area is the number one area at risk for storm surge, the third highest for cyclonic wind damage, and the fifth highest for river floods.

Manila may have gotten lucky during super typhoon Haiyan, dodging the worst the storm had to offer, but next time it might not be. Nearly half of Manila's population is seriously at risk of earthquake damage and the city is severely affected by high wind speeds and severe storms. Flooding has become a near annual disaster, plaguing the city in 2012 and 2013.

The Tokyo-Yokohama region is at a severe risk of nearly every potential calamity: earthquakes, monsoons, river floods, and tsunami. Nearly 80% of the population is seriously exposed at any time to large earthquakes. In addition, Tokyo is located on an active fault in the Pacific, making it especially at risk for tsunamis.