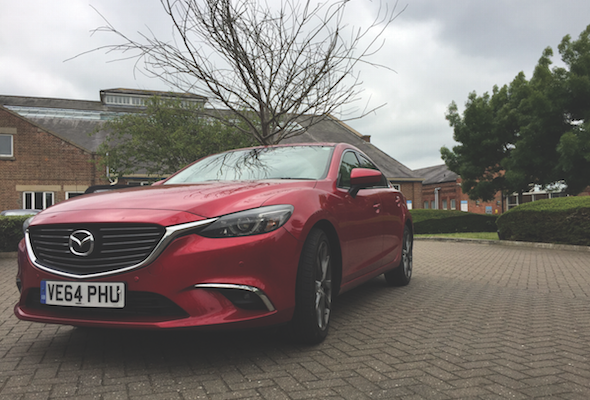 Mazda have always made good cars. And If they can sort out the infotainment system, they'll make our man Andy REALLY happy...

Our long-term Mazda 6 has been replaced with a new one – and you don't need to be a Mazda fan to spot the difference. The lack of a large loading area at the back is the most obvious change as our new car is a saloon rather than an estate – and I think that's a shame.

The 6 Estate is a great load lugger and, personally, I think a better-looking car, but then I am a fan of estates. We've changed cars because the 6 has just gone through a mild facelift and Mazda wanted us to see what they've done. The most obvious difference is the interior, with a revised dash and new entertainment system.
There are a lot of positive things to say, but let's start off with the negative. Mazda have gone the way of more and more manufacturers by replacing the handbrake with an electric parking brake – and I just don't like these, because they give us all more complications and cost where they're not needed. By the time this model hits the used-car lots, we'll be looking at replacement parts. At up to £400 each side to replace, this makes them an expensive fix.

That aside – which, in fairness, is a general gripe and not aimed at Mazda – the interior is a significant improvement. Not that the old one was bad, but the quality of the facelift has really elevated the cabin quality. The leather dash and quality of plastics are of significantly better quality than a few of the 'premium' cars on the fleet and it feels well built and that it's going to last well.

There are more functions available on the all-new entertainment system and the phone interface is a little easier to use, but the sat-nav and the radio are more complicated than the old one. For instance, the nav system has 'fast', 'short' or 'easy' for route guidance. Set to 'easy' it tried to take me 45 miles up the M3, M25 and down the M4 instead of a four-mile cross-country jaunt. Who would use that?

Mazda continues to be one of the manufacturers that impresses me the most with their build and design, and the new 6 is no different. After a couple of weeks she feels well built and comfortable and already two passengers in her have placed their own orders. Now that's praise indeed!