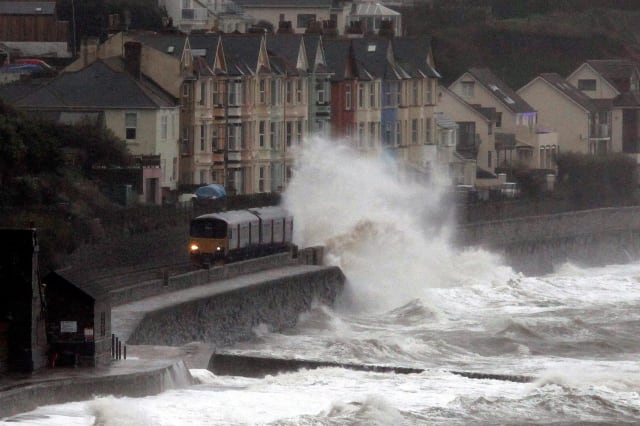 Passengers were left stranded in darkness during the night for several hours after their train was hit by a large wave in Dawlish, Devon, on Sunday night.

The Arriva Cross Country service from Manchester Piccadilly to Plymouth broke down when its electrics failed at about 9.30pm.

A spokesman for the rail company said the train, which had 36 passengers and three crew on board, was "struck by spray from waves... with seawater entering the train's roof, causing mechanical problems."

The Torquay Herald Expressreports thatpassengers had to sit in darkness between Dawlish and Teignmouth for four hours before they were eventually evacuated down ladders, onto the tracks, and onto another train which eventually left at around 2am.

Passenger Kerry Pollard told the local newspaper that the train "lurched erratically" a couple of times before grinding to a halt.

"Four hours later they evacuated us. We had to climb down ladders onto the tracks then back up another one to another train."

The breakdown caused delays on other services, although First Great Western said the majority of services were able to carry on running.

Cross Country has apologised for the incident. Its spokesman said: "Despite numerous attempts it proved impossible to get the train restarted so ultimately everyone was transferred to another train to continue their journeys, although involving a considerable delay.

The same stretch of track was destroyed by winter storms in February 2014. Some of the line was left hanging in the air after the sea wall was completely destroyed, causing months of disruption while repairs costing millions of pounds were carried out.

According to Cross Country, the new Voyager trains that are in use on the line are vulnerable to seawater because air intakes in the roof allow water to get into the electrics.

The company has an agreement with Network Rail and the Met Office that it does not operate at Dawlish when high waves are predicted.

Dawlish train hit by huge wave: Passengers stranded in darkness for hours
Dawlish has three beaches: the main beach, Coryton Cove, and Boat Cove. The main beach runs along the edge of the town. Dawlish Warren also boasts a wonderful beach - it's around a mile and a half along the coast, and can be reached by walking along the sea wall.
The railway line hugs the sea wall all the way along the coast, making a train journey one of the most scenic in Britain.
Waves regularly crash onto the sea wall at high tide, and trains are often hit by seawater.
The tranquil lawns at Dawlish overlook the outlook of a small river, Dawlish Water, locally known as the Brook.
The sea wall with the tide going out.
Views from the main beach towards Teignmouth.
Dawlish is famous for its black swans. The Brook is the home to a great variety of ducks, swans and rare wildfowl which feed from the small weirs which interrupt the water's flow. You can view hatchlings in the specially constructed pens on the banks.
Dawlish Warren boasts more than a mile of golden sand, based on a spit that curls out into the Exe Estuary. It hosts a popular holiday resort, nature reserve and golf club.
Sunrise from Lea Mount, looking out towards Exmouth, just visible in the distance.
You can't go to Dawlish without having an ice cream (topped with clotted cream and a chocolate flake for good measure) at Gay's Creamery, which has been a stalwart since it was established in the 1920s.
One of the finest examples of Devon's famous red cliffs: Langstone Rock.
The seaside town has been a popular family holiday resort for more than a century.
Dawlish has a quiet, relaxed feel, full of charm and loaded with atmosphere. It was once the haunt of literary giants of Jane Austen and Charles Dickens, who used the town as the birthplace of Nicholas Nickleby.
A peculiarity of the town is the railway station, which is a fine period piece.
A spring day by the Brook.
Up Next

Refunds for passengers if train delayed by more than two minutes