Brabus turns Mercedes-AMG GT up to 11 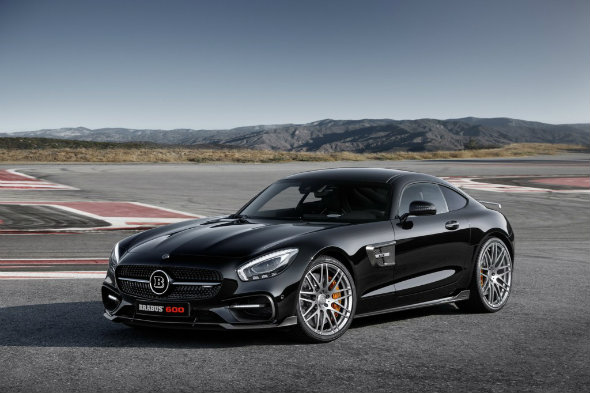 Mercedes' in-house performance department, AMG, is on something of a role at the moment, with a slew of exciting new vehicles, including its potent GT sports car. For renowned tuner Brabus, however, this 503bhp two-seater is somewhat lacking, and it has responded with its own version, which is capable of over 200mph.
Set to upstage Mercedes as this week's Frankfurt motor show, the Brabus AMG GT bears all the hallmarks of a seriously high-speed conversion, including huge brakes and a ground-hugging - if surprisingly conservative - body kit, that suits the GT's swoopy styling.

Those used to the insanely powerful creations that normally emerge from Brabus' factory gates (850bhp G-Class SUV, anyone?) may be surprised to hear that the company's under-bonnet tuning has been quite restrained, with the GT's 4.0-litre turbocharged V8 boosted by 88bhp to 591bhp. Again, unlike most of Brabus' vehicles, this has been done without major hardware changes, with just new software and tweaked turbos needed to release the extra potential.

Of course, nearly 600 horses in a compact two-seat sports car is still a huge amount by any measure, and the performance figures are suitably eye-watering. 0-62mph takes just 3.6 seconds (an improvement of 0.2 seconds), while the top speed has risen by 8mph to 201mph.

Brabus turns Mercedes-AMG GT up to 11
Up Next


To maximise the GT's performance potential, Brabus has utilised some clever weight saving, including a trick titanium and carbon fibre exhaust system, which is claimed to weigh 40 per cent less than the standard item.

However, the Brabus AMG GT is as much a styling upgrade as it is an exercise in fettling. It comes with unique forged alloy wheels, the carbon fibre body kit is finished in a clear lacquer and inside there are dozens of new metallic embellishments, including back-lit Brabus scuff plates. Buyers will also be able to choose from a dizzying array of leather and alcantara upholstery options.

And the price? That's yet to be revealed, though with such a high level of customisation on offer, there's very little limit to how much potential customers could spend.

Do you think Brabus has improved the Mercedes-AMG GT, or is it a step too far? Have your say in the comments section below.