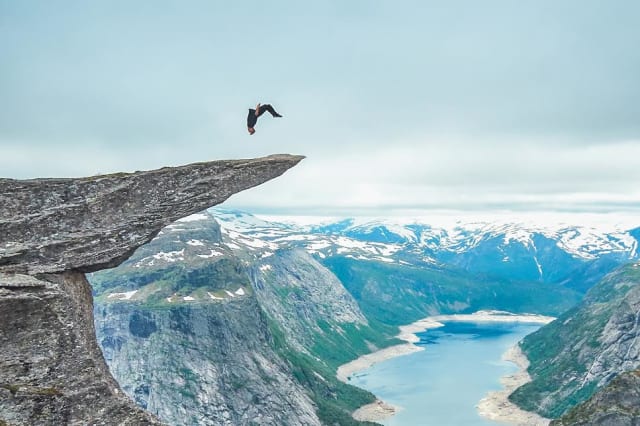 It's fun to spice up your holiday with a few activities but one Brit took this to the next level.

Toby Segar, 21, from Surrey was in Norway when he decided to take his life into his own hands to a perform a series of death-defying stunts on the edge of a 700m high cliff.

Trolltunga in Norway juts out from the side of a mountain above the Ringedalsvatnet lake.

The cliff's name translates as 'troll's tongue' and, given its bizarre shape, we can see why.

From backflips to high jumps, Tobys' confidence in his abilities is obvious when you look at the evidence. At one point the 21-year-old daredevil takes the weight off his feet as he casually takes a seat right on the edge of the precipice.

Although it's not clear how wide the rock is at this point, the fact that it's 700m above the ground is enough to make anyone tingle with fear.

Toby says: "Everyone is scared of heights, it just takes time to learn how to deal with that fear rationally.

"The scary bit was standing on the very edge of the overhang in preparation for the backflip.

He added: "It might sound crazy, but nothing can go wrong after take-off."

According to the Mirror, Toby is a parkour artist and even though his usual work place is a little more urban than Trolltunga he loves the opportunity to perform in front of more dramatic scenery.

Daredevil parkour artist performs backflip on 700m high cliff
Mount Hua Shan's death-defying cliff-side climb attracts thrill seekers and pilgrims to its network of precipitous trails for access to the religious structures on the five summits of the mountain, such as the tea house, located 7,087ft up the southern summit. There are no official statistics, but there are reportedly around 100 fatal falls each year. Some of the most dangerous parts of the trail are Thousand-Foot Precipice, Hundred-Foot Crevice and Black Dragon Ridge.
As the least accessible part of Utah's Canyonlands National Park, the Maze isn't the safest place to go for a hike. Its remoteness and difficult roads and trails mean even getting there is a challenge. It's a breathtaking place for a hike but it's not for the inexperienced and it could take rescuers three days to reach you if you get stuck in one of the dead-end canyons. The risky walk has no shade and water is scarce but it hasn't claimed any lives to date due to it being so intimidating that only 2,000 canyon trekkers visit a year.
Located 1,500ft above a glacier, the 'world's scariest bridge' is a pedestrian walkway in the Swiss Alps built some 10,000ft above sea level. Titlis Cliff Walk takes you over Europe's highest suspension bridge on a frightening walk. The 100-metre-long bridge allows tourists to experience the surrounding mountains, see parts of Italy and peek down hundreds of feet into the abyss.
The Camino del Rey, or King’s Walkway, is a one-metre wide walk hanging off the rock faces 100 metres up the walls of the Gaitanes Gorge in southern Spain. The concrete path has no support rails and parts of it have collapsed. Several people have lost their lives walking the path and the most recent accident was in 2000 when two walkers fell to their deaths.
Huayna Picchu, a mountain which rises over Machu Picchu in Peru, is home to one of the most dangerous hikes in the world, aptly named Death Hike. It consists of an old Inca staircase climbing to around 1,000ft in less than a mile. The route is full of crumbling rock and slippery stones, as well as exposed corners. When it's cloudy, the hike is even more difficult and climbers have only old steel cables for support.

The 200,000 or so tourists who visit this dangerous-looking hangout spot in Norway each year don't seem perturbed by its 1,970ft drop into a fjord below but Preikestolen, also known as Pulpit Rock, is as dangerous as cliffs come. There is no safety railing on the edge of the cliff but there have been no tourist fatalities and authorities say they opted not to install a fence as it would harm the natural beauty and could even encourage dangerous behaviour. They say they "cannot fence in all nature in this country" and Norwegians, who are more accustomed to "dangerous nature," support this.

Trekkers willing to tackle Papua New Guinea's treacherous Kokoda Trail spend around 4 to 11 completing the track, which has seen countless deaths as it was also the scene of fighting between the Japanese and Australians in 1942. As well as slippery routes and ankle-deep mud, hikers face malaria, heat and daily rain.
Even the bravest of thrill seekers will think twice before crossing this bridge in Pakistan, but for locals in the Hunza Valley, a walk across Hussaini Bridge is the only option if they want to reach a nearby town. Located above Lake Borit, the hanging bridge has huge gaps between the planks and a wild side-to-side swing. Those who dare to look up while crossing the bridge, can take in the magnificent views of snow-capped mountains.
It may look like a perfect spot for a coastal walk but Morecambe Bay, located a few miles south of the Lake District, is one of the world's most dangerous beaches and one of the deadliest walks in Britain. The bay is well-known for its treacherous sands and fast-moving incoming tides. Its 120 miles of swirling currents and shifting mudflats include some of Britain's most dangerous quicksand. For those who do want to cross the sands of Morecambe Bay, the Queen's Guide to the Sands Cedric Robinson MBE, is a royally appointed guide who leads group walks.
Tourists with nerves of steel can step onto a 60-metre long glass walkway, aptly named the Walk of Faith, which sits 1,430 metres (4,690ft) up Tianmen Mountain in China. For those who need a confidence boost, Tianmen Mountain National Forest Park is often clouded in fog, making the drop hard to see. Extreme walkers will love the translucent floor on a clear day as it offers some unforgettable sightseeing.
Up Next