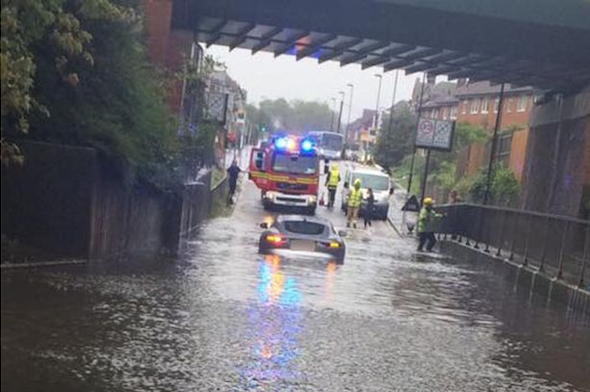 Photo credit: The Mirror/Chris Pratt
An unfortunate Jaguar owner may have wrecked his £50,000 sports car after driving into a deep puddle.

The Jaguar F-Type appears completely submerged in the puddle underneath a bridge, with emergency services in the distance appearing to attempt to remove the stricken sports car.Chris Pratt, who took the photograph, said that the drains were blocked and that all of the water was eventually pumped away and the Jaguar removed. Two police cars and a fire engine attended the scene in Hampshire.

He told the Daily Mirror: "I was taking my daughter to a shop and I heard all these sirens and then there was this car almost completely underwater – with its lights still on."

"It seemed there was a man who had been driving and a female passenger and I saw them climb out the windows and later both were talking to the police – they looked pretty gutted."

The Jaguar F-Type is priced from £51,260, with even the base model achieving 60mph in 5.1 seconds and going on to a top speed of 161mph. Available in both convertible and coupe body types, we see the latter here in the drink.

Mr Pratt added: "It would have been pretty obvious who had been in the car anyway as they were soaking up to the thighs. It was quite funny."

"I don't know what they were thinking – the puddle was about three or four foot deep."