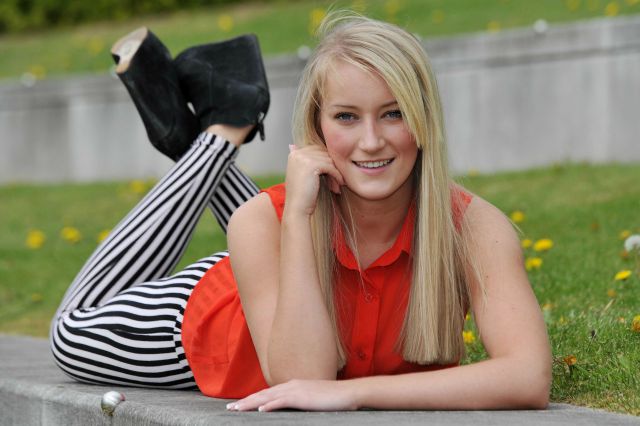 Former Birmingham City footballer, and Ex-Miss England, Amy Laban, has been jailed for conning an insurance company out of thousands of pounds in compensation.

The 25-year-old from Nottingham was sentenced to two months in prison, after Laban claimed she had suffered whiplash in a car crash in Birmingham in 2012. She conned £3,000 out of her insurer, but she made a number of obvious errors.

She missed medical appointments, which is what made the insurance firm suspicious, and it launched an investigation. At that point it discovered that while Laban was meant to be suffering from her injuries, she continued to play football, and tweeted about training for a charity skydive. Among the most revealing tweets was one of her riding a mechanical rodeo bull just a few weeks after the crash.

The Mirror reported that Laban told the court she had only claimed for whiplash because she had received phone calls from a number of lawyers encouraging her to do so. In a statement she said she was: "Young, vulnerable, stupid, but also taken advantage of by a claims company."

According to the Birmingham Mail, she admitted to contempt of court, and the judge sentenced her, saying: "People think this is a victimless crime, however, it uses the courts resources to facilitate the crime; it uses insurers' resources. Genuine claimants have the eye of suspicion cast on their claims. The courts have stressed repeatedly that those who commit this must receive prison sentences."
%VIRTUAL-ArticleSidebar-crime-stories%
Not the first

Laban is one of a huge number of Whiplash hoaxers. There are around 500,000 whiplash claims made each year, and while insurers cannot be certain what proportion of these claims are fake, some estimates put it as high as 50%.

And while the actions that led to Laban getting caught may seem foolish, these are far from the daftest mistakes anyone has made when claiming. In 2013 one Londoner told his insurance company his whiplash meant he'd been unable to care for himself or his son. He was then filmed in a professional cage fight days later.

In 2013 LV= revealed one mum claimed she and her daughter were hurt in a crash – then posted on Facebook she was badly shaken in the accident but luckily her daughter was not in the car at the time.

It also told the story of the mum who was caught out claiming £3,000 for a whiplash injury in a crash in a friend's car - which took place at the same time she was giving birth.

Perhaps the most bizarre was in July 2012, when a man from Leeds called his insurance company to tell them he had suffered whiplash in an accident. Then he hung up and boasted about how easy it was to fool them. Unfortunately for him, he hadn't hung up properly, and the insurer recorded everything.

Grandmother jailed after stealing for man she met on holiday

Future criminals can be spotted before they start school

In May, Paul Robert Benson, a 24-year-old from Lurgan, stole groceries from his local supermarket. He might have got away without being identified, if he hadn’t decided to wear a Manchester United top with 'Benson 22' written on the back.

The judge sentencing him to 12 months probation said that he might as well have had a neon sign on his back.

In January, Scott Tinsley, a 38-year-old from Cobridge in Staffordshire, was jailed for 40 months after admitting burglary.

He broke into a property in the middle of the night, took electrical items, and put them in a garden a few doors down. However, he then started feeling a bit peckish, so he popped back to the property to make himself a snack. Then he promptly fell asleep - and was discovered by the homeowners in the morning.

In September 2014, a drunk burglar in the Chinese city of Suqian, talked himself into a corner.

He broke into a fifth floor flat on the mistaken assumption that it was empty, and was quickly caught by the owner’s ten-year-old daughter. When she asked what he was doing there, he decided his best defence was to say that he was Superman, and was about to fly back to his secret headquarters.

She told him to prove it, so the burglar stripped to his underwear and jumped out of the window. He told police from his hospital bed that it had seemed to make sense when he was drunk.

In July 2014, Stewart James Wright, a 37-year-old from Middlesbrough, thought he’d stumbled across the perfect crime.

He saw the door open at a student house, so wandered in and simply picked up their 42-inch-TV. Unfortunately for him, he hadn't really thought through his getaway plan.

He’d travelled to the area by bike, and was stopped by police cycling along a nearby road, trying to balance the TV on the handlebars. He was on bail at the time for stealing a bike.

In June 2014, Jamie Neil, a 41-year-old from Bethel in Cornwall, was jailed for robbing a petrol station in St Austell.

His plan to disguise himself by putting a plastic bag over his head would have worked better if he hadn't chosen a completely transparent one.

In June 2014, Nigel Ball, a 52-year-old from Wakefield, was found guilty of stealing a fish tank from a pet shop. He was caught after going back to the store to buy fish to put in it, and when staff asked him what sort of tank he had, he pointed to the type he had just stolen.

He had to complete a form with his contact details in order to take the fish, so police tracked him down to his home where they found the stolen tank.

In October 2013, a man from Perth tried to rob a corner shop, and was foiled by his trousers.

He took the till, and tried to run away with it, but his trousers were so loose they kept falling down. In the end he was forced to drop the till so he could hang onto his trousers. In the confusion he also dropped his knife and a pair of gloves, and a police dog used them to track him down. He was jailed for three and a half years.

In February 2013, a man in the Washington suburb of Laurel concocted a flawed plan to rob a bank.

His big mistake was failing to bring a bag, so he dropped the cash on the floor. He stopped to pick it up and put it in an open umbrella. Unfortunately for him, while he was held up collecting the money, the police deflated the tires on his car.

He tried to escape on foot, but slipped on a patch of ice and banged his head: at which point he gave up.

In January 2008, a man from Louisiana decided to rob a seafood restaurant. He forgot to take a disguise, so he picked up a bucket that was lying nearby and put it on his head.

The slight drawback to his disguise was that he wasn’t able to see, so he kept blundering into thing. He also had to keep lifting the bucket up to see where he was going. The security camera was therefore able to glimpse his face, and the man was identified, arrested and charged.

In September 2011, a woman from Manchester tried to steal several hundreds of pounds worth of booze from Asda in Oldham.

She loaded up the trolley, and walked out of the shop without paying. She managed to get to her car and load it up before staff caught up with her.

Sadly for her, when she jumped in the car to make her getaway, she realised she had run out of petrol. She was caught trying to push the car into the petrol station.