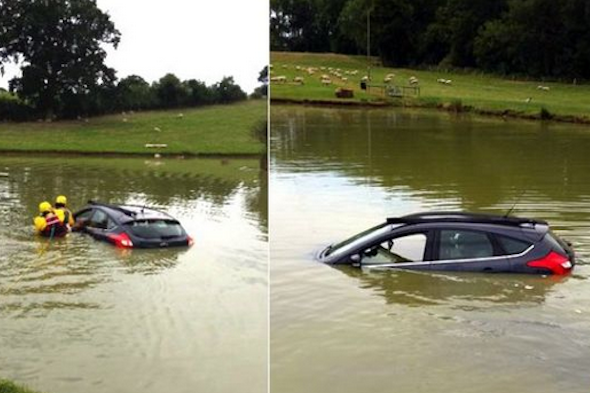 An elderly driver remained calm and composed after crashing his car into a lake, even continuing to smoke his pipe as he waited for emergency services to arrive at the scene.

The incident happened on Oakham Farm Pools in Loxley, Warwickshire on Tuesday afternoon shortly before 3pm. The octogenarian had gone to the lake to fish, but accidentally drove his Ford Focus into the shallow water.
Firefighters from Rugby, Stratford and Gaydon rushed to the lake to find the man unharmed and unphased and still in his car as it slowly sank further.

A spokesman for West Midlands Ambulance Service commented: "After his car ended up in the water, he smoked his pipe and chatted to the farmer who went into the lake in his waders."

Firefighters carried the man from his car back to dry land, before he was driven home in an ambulance.

John Hutsby, who owns the farm, told The Telegraph: "This was the first time the gentleman had been to the site. We had to meet him down by the gate to let him in and he started driving up to the lake. He must have saw some fisherman on the other side and started driving over to them thinking it was flat. But he went straight up the bank and into the pond - he must have took off."

He continued: "The fishermen said they heard an almighty splash but he was just sitting there and carried on smoking his pipe while the car sank. It went up to the car windows in the end but he just kept puffing away - completely unperturbed by what had happened."
Tags
Read Full Story