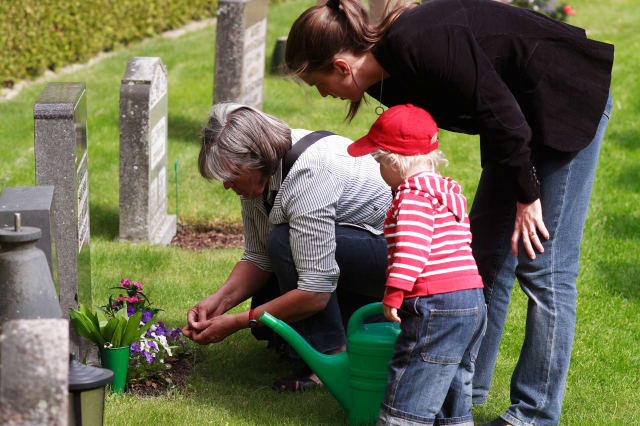 Paupers' funerals are making a comeback, and it's hardly surprising given the cost of laying someone to rest. A new study has revealed that the price of a burial plot in the UK now averages £1,841. However, if you want to buy a plot in some parts of the country, you face a horrible final postcode lottery.

Post Office Money Funeral Planning found that the most expensive place to be laid to rest is Birmingham, at an average cost of £2,825. This, perhaps unsurprisingly, is followed by London at £2,617. In fact, London is so overcrowded that some boroughs have a blanket ban on burials

At the other end of the spectrum, burials cost £980 in Belfast - 47% less than the UK average.
%VIRTUAL-ArticleSidebar-family-stories%
Even if you opt for the marginally cheaper approach of being cremated and having your ashes interred, it'll set you back £1,148 in Manchester - the priciest place in the country for having your ashes buried.

Nick Kennett, Director of Financial Services at Post Office Money, said: "The variable cost of land across the UK has effectively created a postcode lottery and the results are surprising enough that people may have to pay more than they were initially expecting."

Of course, you can shop around, but price is highly unlikely to be the driving force in the decision-making process. Some 24% of people want to be buried somewhere meaningful to them, while 12% want to be buried in their hometown, 10% want to be near their living family, while others want to be in the same location as deceased loved ones.

To make matters worse, the cost of burial is just a small fraction of the total price of a funeral. The International Longevity Centre says that the average cost of a 'simple funeral' - where families just pay for the basics - has increased 10% in the past 10 years to £3,590. If you want to push the boat out, with things like flowers, a memorial and catering, you're looking at an average of £5,423.

This is a record high for funeral prices, but the organisation warned that this is only likely to increase. The Baby Boomers are turning 70, and so we will start to see a rise in the death rate until it's 20% higher in 20 years' time. Increased demand is going to push up prices - unless we see an equally enormous boom in the number of funeral directors, crematoria, and new graveyards. It estimates that the average funeral will cost £7,000 within ten years.

There's very little you can do about the cost of a funeral, except set aside the money to pay for it yourself - either in savings or in some sort of funeral planning product. At the moment just 30% of people have done this - which could leave 70% of families with a financial headache at a terrible time.

It's also important to let your loves ones know what you want from your funeral and final resting place. The Post Office study found that 27% of people don't care where they are buried (including 32% of men). If you're keen to be buried, your family could theoretically shop around for the right balance of practicality and cost in finding you a burial place. If you're not too worried about how you are laid to rest, you could be cremated for a fraction of the price.

But what do you think? Do you mind what happens after your death? And have you made any plans to ensure your wishes are carried out?

Grimsby mourners face fines for funerals that take too long

Would you turn your dead loved ones into bling?

Cemetery cashes in on demand for graves near Miles Davis

King of pop Jackson was rumoured to have financial problems when he died in June 2009.

However, his music shot back into the charts as soon as he was no longer around to make any more and it is estimated that Jackson has sold well over 10 million albums since his death at the age of 50.

As a result - according to the latest figures from Forbes Magazine - Jackson's estate made an incredible $170 million (£108 million) in the 12 months to October 2011.

Presley's estate, which is thought to be worth about £1 billion, has generated many millions from music royalties, licensing deals and tourism at Graceland since his death in 1977, aged 42.

And it continues to earn about $55 million a year, partly thanks to posthumous appearances in adverts for products including Apple's iMac to Lipton's Tea.

Monroe is one of the most iconic stars of all time. And despite dying in 1962, her curvaceous image is used to sell everything from Visa to Volkswagen.

When she died, aged 36, her estate was valued at £1 million. However, the Forbes figures indicate that it earned a massive $27 million in the 12 months to October 2011.

The Beatle's estate has earned vast sums since he was shot dead in New York in 1980.

It was valued at about £100 million at the time of his death, but is since estimated to have grown by a further £200 million. And according to the latest Forbes list, it still makes $12 million a year.

The Nirvana singer, who committed suicide in 1994 at the age of 27, continues to be an iconic figure for many fans.

And his songs are still bringing in huge amounts of cash. In 2006, Cobain's widow Courtney Love sold 24.5% of the grunge band's publishing catalogue for a rumoured £35 million.

Not all the celebrities on the list are singers or film stars. Crime writer Christie has also amassed a huge fortune since her death in 1976, aged 85.

Her books continue to fill shelves around the world, while the immense popularity of her sleuths Hercule Poirot and Miss Marple have made her the bestselling author of all time, according to The Guinness Book Of Records.

However, his music shot back into the charts as soon as he was no longer around to make any more and it is estimated that Jackson has sold well over 10 million albums since his death at the age of 50.
As a result - according to the latest figures from Forbes Magazine - Jackson's estate made an incredible $170 million (£108 million) in the 12 months to October 2011.

Einstein died in 1955 at the age of 76, but the dead scientist is still raking in $10 million a year, according to Forbes Magazine.

His image has been used to advertise everything from McDonald's Happy Meals to the Toyota Prius.

The reggae singer died of cancer aged 36 in 1981. But the Marley family has continued to receive massive royalties from his musical catalogue.

It includes the best-selling album "Legend", which alone is believed to have earned them more than £10 million since his death.

The American rapper was just 25 when he was killed in Las Vegas in 1996.

However, his untimely death has not stopped him becoming the most successful hip-hop artist ever, selling more than 75 million albums worldwide. His estate is thought to earn about £4 million a year from his back catalogue.

By October of that year, according to Forbes Magazine, the value of her estate had swelled by about $12 million.