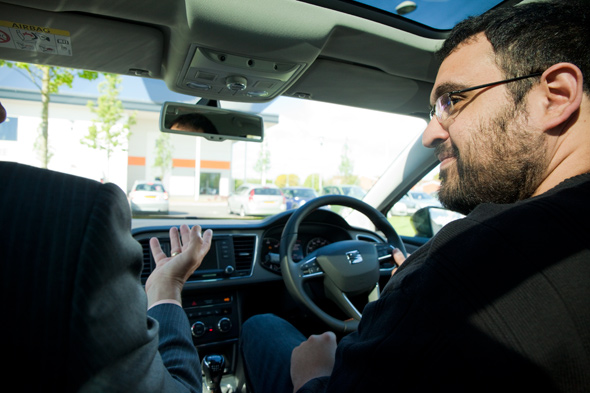 So you think you're a good driver? For the majority of motorists, myself included, years served behind the wheel are often considered an indicator of driving competence. And while there's certainly a lot to be said for skills honed over thousands of miles of driving, we can often fall into bad habits.

Handily, for those who feel as though their driving could do with some improvement – or just want to show off just what good drivers they are – the Institute of Advanced Motorists (IAM) is at hand. For well over 50 years, this road-safety charity has aimed to improve the ability of all manner of road users, with tuition originally based on the police road craft manual; used by highly-trained coppers more accustomed to high-speed chases than the grind of the morning commute.

But just how good does one's driving have to be to pass the organisation's notoriously-rigorous advanced driving test, and gain the kudos (not to mention insurance benefits) that goes with it? To find out AOL CARS up with Mark Lewis, the IAM's director of standards, for a driver assessment. With years of experience of driving from everyone from the Metropolitan Police to the United Nations, he's certainly best placed to tell me where my road craft could do with improvement.

Sat in the driver's seat, I'm immediately taken back to my first driving test – the sense that your every move is being scrutinised, making what is an everyday task seem overwhelming. Thankfully, this being merely an assessment and not the test proper, Mark is friendly and chatty, and immediately puts me at ease.

Firstly, an advanced driver should know his car inside out, and would be able to reach important buttons such as the hazard warning lights without looking. I, thanks to using a borrowed car, fail in this respect. No matter, there's only so much I can do wrong by backing out of a parking space to start our drive.

Wrong again. Despite thoroughly checking all angles, and slowly reversing backwards so not to be caught out by fast-approaching vehicles, Mark soon points out I'm not using all of my senses, and suggests winding down a window to better detect an approaching vehicle I may not have seen. It seems it is this attention to detail that separates the men from the boys.

AOL Cars takes the IAM's advanced driving test
Up Next


Joining a main road, I soon make another basic error. While we are told as learner drivers to leave a sufficient gap between the car in front in queuing traffic, how many of us get as close as possible without thinking? "Tyres and Tarmac," says Mark – leave enough of a gap to see both the road and the tyres of the car in front so you can get around it should it break down, or – even worse – the driver gets out in a fit of road rage.

However, by anticipating the moves of other drivers and improving forward planning, such undesirable scenarios can largely be avoided. And so it is on to the motorway so Mark can assess my driving at higher speeds. My long-held loathing of middle lane-hoggers pays dividends here, and by giving ample room to those I anticipate needing to overtake slower traffic, I successfully negotiate our short stint on the M27 – even if some drivers were suggesting I travel above the speed limit by sitting inches from my back bumper.

Turning off the motorway and on to twisting country lanes, forward planning becomes ever more crucial. The tall hedgerows and narrow lanes leave little room for manoeuvre should a wide load or sudden road block come into view. Thankfully, Mark has some handy tricks up his sleeve to better assess what's coming up.

Firstly is to drive at an appropriate speed. The lanes of our Hampshire test route may be national speed limit, but it'd take a very foolhardy driver to blindly zip along at 60mph. Instead, try this: when approaching a blind corner, focus on the vanishing point of the road – the furthest point of asphalt that you can see. Does this move consistently away from you as you drive towards it, or is it getting closer as you approach the bend? If it is the latter then you're travelling too fast for the severity of the curve. Try it out the next time you're out for a drive; it can take some getting used to, but once mastered it will save you the blind panic that comes with driving into a corner too quickly.

There are also other indicators as to the lay of the land ahead. Trees lining the roadside can often show the direction the road is heading, but foliage brings its own hazards. Always be ready to negotiate unseen hazards, says Mark. If there are trees there may be fallen branches, or a mass of slick, wet leaves on the road. Similarly, if you see horse manure on the road, assume that you'll come across a rider at some point up the road. Also, when's the last time you saw just one biker out enjoying a countryside blast?

While this guidance may seem like common sense – and largely it is – it's amazing just how easy it is to forget it when you're driving, particularly if you're distracted or in a hurry. And even once you've gleaned some knowledge from a man as experienced as Mark, it's very easy to slip back into your default driving mode. The importance of putting advanced driving techniques into practice at every opportunity is paramount, and is key to raising the standard of one's driving.

Before taking this assessment I would have assumed that passing the IAM test would have been a walk in the park. The truth, however – revealed in our post-drive debrief – although encouraging, suggests I have some work to do before I can join the ranks of the 10,000-plus (not a lot, is it?) motorists who can call themselves advanced drivers. However, even with this short exposure, I feel my driving has improved immeasurably, and such an assessment would no doubt prove useful to any driver, regardless of their years behind the wheel.

Dominic West in frame to play Prince Charles in The Crown