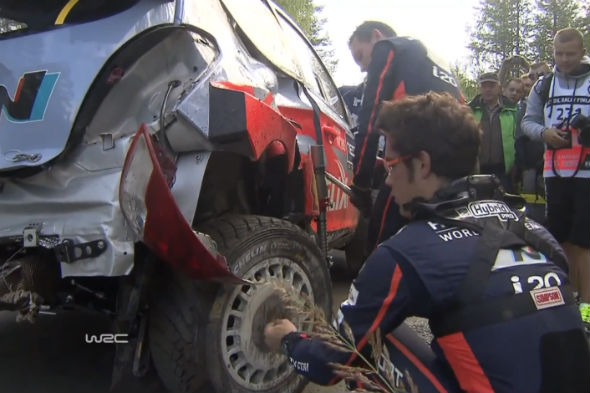 Rally drivers are used to negotiating snow, mud, Tarmac and gravel as they pit themselves against some of the most challenging courses around the world.
Belgian driver Thierry Neuville, however, wasn't prepared for just how slippery the muddy Rally Finland course would be this week, attempting to carry far more speed than his tyres could handle around one of the track's low-grip corners.

With the tyres failing to grip the surface, Neuville's car slid sideways at around 100mph into trees, with the force of the impact proving strong enough to knock a tree over – and destroy the back of Neuville's Hyundai i20. And all this in the pre-race shakedown session...

Thanks to recent heavy rain, many of the drivers described the surface as being like an ice rink, with their tyres failing to find purchase on the slick, muddy gravel.

Watch the dramatic crash for yourself in the video below.