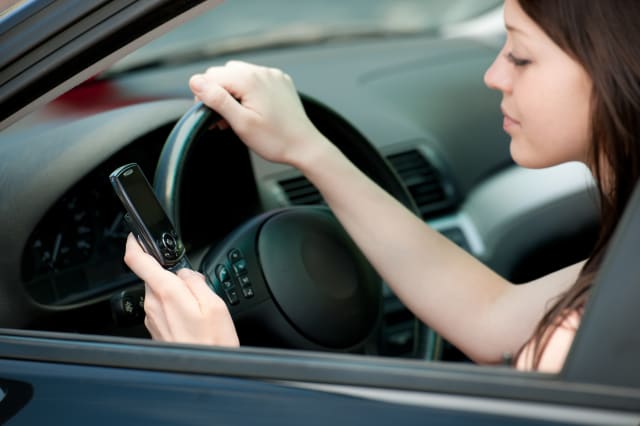 New research has revealed that almost half of all drivers have the wrong end of the stick about rules surrounding texting at the wheel, which could lead to hefty penalties, and far higher car insurance costs.

The AA found that a large number of drivers thought it was perfectly fine to send a text at times when doing so is actually illegal. These include the 46% who thought they were allowed to read or write a text when they are pulled over at the side of the road with the engine running: this is actually illegal.

More worryingly, 28% of all drivers thought it was OK to text when they were stuck in a traffic queue, and 11% said they'd be happy to do so if they were waiting at a traffic light.

Younger drivers are especially likely to get things wrong. Some 41% of those aged 18-34 thought it was OK to text in traffic, and 23% of those aged 25-35 thought they were within their rights to text at traffic lights. 16% even thought they'd be OK to send or read texts when they were in slow-moving traffic.

In fact, in order to be legal to send or read a text in the car, it needs to be parked safely with the engine turned off.

There's a very good reason for this. Janet Connor, managing director of AA Insurance points out that drivers using a handheld mobile phone are at four times greater risk of having a crash. She said "It's a deliberate act that diverts attention from driving, significantly heightening the risk of a crash."

And while she adds that many people think they can get away with it, because they won't get spotted by a police officer, in the event of a crash, officers will routinely check the phone's records to see whether a message or call was taking place at the time.

If you are caught breaking the rules, you face a fixed penalty of £100 and three points on your licence. In some circumstances, drivers could be charged with careless or even dangerous driving. If found guilty of either of those things, drivers would at the very least pay a hefty fine, and at worse face disqualification.

Young drivers who gain six penalty points or more within two years of being granted a driving licence, will have to take their test again too.

The AA surveyed insurers to check the impact on insurance costs for a 35-year-old man driving a Ford Mondeo. The biggest increase in price after a driver was caught using a mobile phone at the wheel was 33%, while a number of insurers would not provide a quote for anyone with a mobile phone offence on their licence. When the offence was increased to one of dangerous driving, the highest rise was 55%, and two thirds of insurers refused to quote.

%VIRTUAL-ArticleSidebar-motoring-guide%
It goes to show that texting at the wheel isn't a slight, acceptable, bending of the rules, it's a highly dangerous traffic offence, which dramatically increases your risk of having an accident, and could prove a very expensive mistake for years to come.