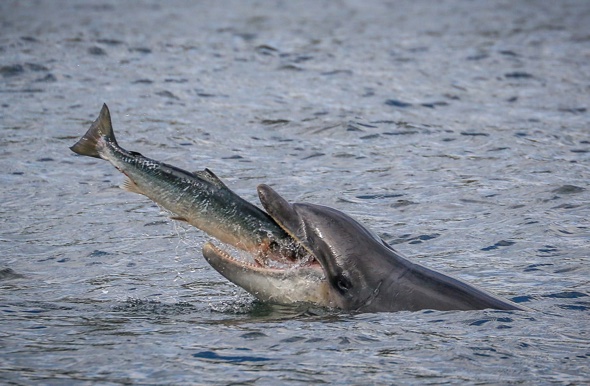 This is the amazing moment a fleeing salmon landed right in a pursuing dolphin's mouth.

The top catch was caught on camera by wildlife tour guide Sarah Pern off the east coast of Scotland.

The images show the moment the Bottlenose dolphin snapped up the huge salmon before swallowing it head first.

Sarah runs EcoVentures Cromarty and insisted that in all her 23 years organising wildlife watching trips from Cromarty near Inverness she'd never seen anything like it.

Sarah, 40, said: "People were saying 'did you Photoshop that?' but I didn't and the rest of the tour were quite impressed. There were a few gasps when it happened.

"We saw the chase from the boat while out on a tour and he caught it. You see them grab it and spit it forward before finally eating it.

"Dolphins can be a bit like a cat with a mouse - they like to play with their food, you can see he was quite proud of that fish.

"There are never any guarantees in this business and we genuinely never know when we leave the harbour each morning what the day will bring.

"Some days we must be content with a distant glimpse of a fin, or simply the knowledge that the dolphins are wild and free to roam as they please."

The dolphin was snapped on a trip on Thursday last week.

See also: 10 things to see and do in Scotland

Sarah insists that although dolphins are under threat in many parts of the world the lack of study of the populations in UK waters means the state of the population is not as well known as it could be.

Sarah said: "There's a resident colony here in the Moray Firth, so we run trips to see them in the summer.

"Everyone round here is familiar with the colonies in Moray Firth and down off the coast of Wales in Cardigan Bay. Off the east coast of Scotland the population is about 200 and most of that is concentrated near here.

"The latest estimates by Aberdeen University is that the population is stable or increasing slightly. They've only been studied for around 25 years so they've always been here but only relatively recently have people started to learn about them."

Chanonry Point is a prime site for spotting bottlenose dolphins, so if you want some great wildlife photo opportunities, this place has got it all. The Point is a small peninsula extending over a mile south east into the Moray Firth from Rosemarkie and Fortrose, and the best times to spot the dolphins are in the mornings when the tide comes in, bringing shoals of fish with it, and in the afternoons when it washes the fish out to sea again. For photography purposes, the afternoon is best because the sun is in the best position. The imposing Fort George lies on the opposite shore.

The Stevenson family – including their most famous member, Robert Louis – was big in the world of lighthouses and examples of their work can be seen around the world. This one, built by Robert’s Uncle Alan, is constructed uniquely in Egyptian style. Completed in 1849 it inspired Alice Thompson’s ghost story Pharos. Local folklore has it that, in the nineteenth century, all three lighthouse keepers vanished without trace forever. Open from 1 April - 31 October.  Stables Coffee Shop and Exhibition Centre open daily. Lighthouse tours every half hour 11am-4.30pm. For admission to the Tower and Exhibition Centre: Adults £5; children under 16, concessions £3; family (4 persons) £14

There’s a treehouse lover in most of us, and there’s a chance to stay in a luxury treehouse in the woods at Fernie Castle for the ultimate outdoorsy type. There are three balconies, a swing and all mod cons – but it all comes with a price tag of around £500 a night. Mind you, this includes a chilled bottle of champagne, chocolates, a fresh fruit basket, soft drinks, biscuits, Continental breakfast, breakfast tea and coffee as well as dinner in the Castle. Up amidst six sycamore trees, the copper-roofed construction is festooned in fairy lights and contains beautifully hand-crafted natural wood furniture, including a king-sized elm bed. There’s heating, running water, a flat-screen TV, DVD and CD player, plus fridge, kettle and coffee maker. This might just be the perfect place for a honeymoon or special anniversary.

You don’t have to be a science geek to enjoy the futuristic, titanium-clad Science Centre on the south bank of the River Clyde. You could be a film buff (there’s a fab IMAX Theatre with a 12,000-watt sound system); a sightseer (the views from the unique 105m-high Glasgow Tower rotates 360 degrees to give breathtaking views); an astronomer (when you visit the Scottish Power Planetarium) or a conservationist (there’s a climate change theatre, too!). But if you do happen to be a budding scientist, it’s an unmissable feast of 300 hands-on exhibits, interactive workshops and live science shows. There’s enough to amuse and entertain to make it a great day out, and you can eat and drink there as well. Open daily, adults (16+) £9.95; child and concessions £7.95, parking £3

Here’s a real must-see in the heart of Glasgow University, housing exhibits left to it by Scottish anatomist Dr William Hunter as well as priceless works of art and historical reconstructions, including a Charles Rennie Mackintosh bedroom (pictured). The Museum holds outstanding Roman artifacts from the Antonine Wall; Dr Hunter’s own extensive anatomical teaching collection and one of the world’s greatest numismatic (coins and currency) collections . The Art Gallery houses a small collection of works by huge-name artists, including 60 works by James McNeill Whistler. You can also see pieces by Rubens, Rembrandt and Chardin. Both the Hunterian Art Gallery and Museum are free and open daily from Tuesday to Sunday.

If you’ve ever had occasion to wish you could be judge and jury, then Inveraray Jail could help you to live out your fantasy. The ancient courthouse and prison is an interactive experience where you can watch re-enactments of ‘prisoners’ facing the judge. Join the jury, hear the verdict, meet the prison staff and socialise with the inmates. The exhibitions are gory enough to satisfy the most blood-thirsty of souls. Adults £8.95; seniors £7.50; children 5-16 £4.95; under-fives free.

Just a couple of minutes’ drive from the M74 you can find yourself in the charming 19th century spa town of Moffat. If it’s your first visit to Scotland, it’s the perfect introduction to the country. Take your pick of hotels and cafés for a meal break then let the kids wear themselves out in a very family-friendly park that has mini golf, boating and a swing park, or take yourselves off for a bracing hill walk. The town itself boasts the narrowest hotel in the world, the shortest street in the UK and the widest main street in Scotland.

Even if you have no knowledge or understanding of engineering, this eight-lock flight is amazing to see. It raises the canal by 19m (62ft) over a quarter of a mile of continuous masonry. It’s overlooked by Ben Nevis and the best way to view it is by boat: a trip takes an hour and a half to pass from one end to the other.

If you’ve ever read Robert Burns’ poem Tam O’Shanter, you’ll be able to put the character Souter Johnnie into some physical context. John Davidson, the original Souter (cobbler) Johnnie, lived in this quaint 18th-century thatched cottage. This National Trust for Scotland house also offers a taste of how the Davidson family would have lived and worked, and you can see Souter Johnnie’s original tools and even a small collection of Robert Burns memorabilia. Open from 1 April-30 September, Friday-Tuesday, adults £6; family: £16 (1 parent : £11); concessions £5. Free to members.

Lurking beneath an innocent-looking Scottish farmhouse is a secret underground bunker that remained hidden for over 40 years. It’s 100 feet below ground level and is huge, measuring 24,000 square feet  - that’s the size of two football pitches stacked on top of one another. In the event of nuclear war, this would be the government headquarters for Scotland. Discover how a Cold War government would have survived underground when you visit the Secret Bunker. Open daily from 10am, last admission 5pm. Closed for the winter season from the end of October.