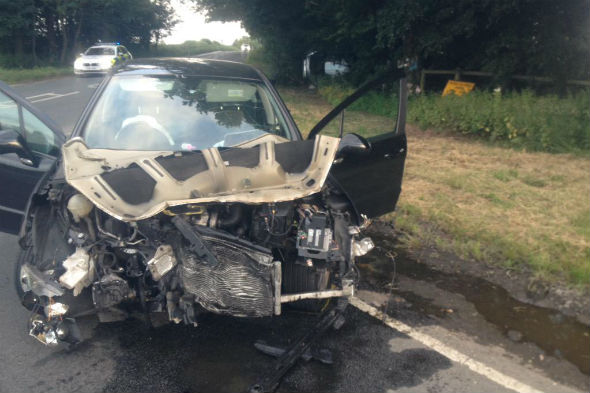 Sat navs have been to blame for all sorts of accidents in the past, with a number of drivers ending up in the sea or on railway tracks after blindly following navigation instructors.
The latest sat nav incident, however, has seen five people injured, after a driver completely ignored road markings telling her to give way and collided with another car, after taking the instruction from her sat nav to go straight on very literally.

The Peugeot driver failed to slow at all for the junction – a junction which saw the death of a 17-year-old girl three years ago after her TomTom did not tell her to give way. One woman was taken to hospital after the crash on suspicion of spinal injuries after the crash near the East Yorkshire village of Walkington on Saturday evening.

Confirming the nature of the incident, Humberside Police issued a tweet on Saturday which read: "RTC at Walkington. Sat nav says go straight on. Road signs and marking say give way." The crash saw the Peugeot driver given first aid before being taken to hospital while four others received minor injuries, needing treatment from paramedics on the scene.

A photo issued by Humberside Police shows the extent of the damage, with the front of one car completely destroyed in the impact and a second lying on its side in the distance.

Hayley Potts, who is reported to have been driving the second car, wrote on Facebook: "Don't know how I got out alive," reports the Daily Mail.

"Very emotional, battered and bruised, and feeling very blessed today that we all survived."