Under siege from 60 million nuisance calls and texts a day 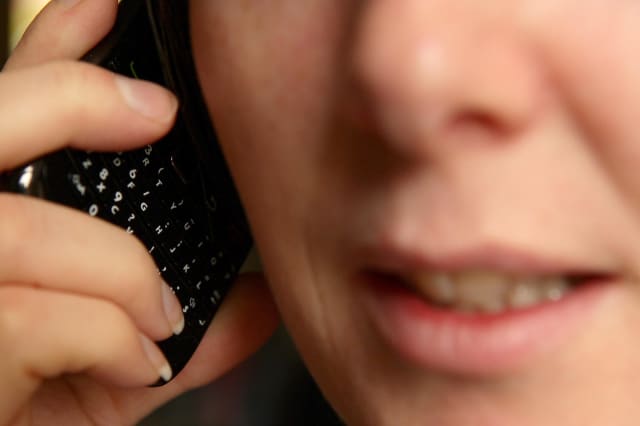 The average person gets 468 nuisance calls and texts every year and one in three of us get more calls from hard-selling call centres than we get from people we really want to hear from - like friends and family.

A new study by LV= has revealed that the number of cold calls we are getting has got out of hand. The average person spends six and a half hours a year either dodging calls, or deleting texts and answer phone messages.

These findings come on the back of news from the Information Commissioner's Office that it had received 180,000 complaints about cold calls in the past year - up 12% from a year earlier, and a record high.
%VIRTUAL-ArticleSidebar-consumer-advice%
The government is taking some action - and has announced it will fine the worst offenders up to £500,000. However, 44% of people think the government and the regulator will have difficulties identifying the companies making the calls and sending the texts.

LV= says one way to cut down the number of calls people receive from claims management companies (who are responsible for 81% of cold calls) would be to reduce the length of time that's allowed to pass between the accident itself and the claim.

However, there are five steps you can take to reduce the number of calls you receive today.

1. Register with the Telephone Preference Service
This is a free service, which you can register with online or by calling 0845 070 0707. Once you have registered, the only companies who are legally allowed to call you are those that you have given specific permission to call, or companies doing market research. This will cut down the calls you get - but won't wipe them out entirely, so you need to do more.

2. Contact the organisation direct
Whenever you receive a call, ask for the name of the business and their phone number. Then you can call them and asked to be removed from their database.

3. Block the number
If that doesn't work, it makes sense to block it. This is simple from a mobile, but to get a landline provider to block the number you will need to convince them that the caller is a real nuisance. Alternatively, you can block a landline yourself with a blocking gadget that you attach to your phone.

4. Make a complaint
If you still receive nuisance calls, you can report them to the Information Commissioner's Office on 0303 123 1113. Before you call, make a note of the name of the company, and when they made the calls. If the calls you get are silent, then you'll need Ofcom on 0300 123 3333.

5. Double-check any forms
You also need to avoid accidentally signing up for more cold calls - so check when replying to any company that the small print doesn't give them permission to call or sell your contact details on.

Forced to screen calls? How to fight cold callers

How to prevent annoying PPI calls

Under siege from 60 million nuisance calls and texts a day

The law states that any goods you buy from a UK retailer should be of satisfactory quality, as described, fit for purpose and last a reasonable amount of time.

This applies even if you buy items in a sale or with a discount voucher. You may have to insist on these rights being respected, though.

Some shops will allow you to exchange goods without a receipt, but they can refuse to should they wish.

If the goods are faulty, however, another proof of purchase such as a bank statement should work just as well.

If you attempt to return goods within four weeks of the purchase, your chances of getting a full refund are much higher as you can argue that you have not "accepted" them.

After this point, you can only really expect an exchange, repair or part-refund.

The updated Consumer Credit Act states that card companies are jointly and severally liable for credit card purchases of between £100 and £60,260 (whether or not you paid just a deposit or the whole amount on your card).

Anyone spending between these amounts on their credit card is therefore protected if the retailer or service provider goes bust, their online shopping never arrives or the items in question are faulty or not as described.

Start by writing to the agency asking it to either remove or change the entry that you think is wrong. It will investigate the matter and find out whether you have been the victim of ID theft or a bank's mistake.

Within 28 days from receipt of your letter the agency should tell you how the bank has responded. If the bank agrees to change the entry, they will authorise the agency to update their records. They should also send updates to any other credit reference agencies they use.

You can also contact your lender directly to query a mistake. If the lender agrees to the discrepancy, ask them to confirm this in writing on their letterhead and send a copy to the agency, asking them to update your file.

The FOS settles disputes between financial companies such as banks and consumers.

If a financial organisation rejects a complaint you make about its services, you can therefore escalate that complaint to the FOS - as long as you have given the company in question at least eight weeks to respond.

The FOS will then investigate the case, and could force the company to offer you compensation should it see fit.

Bailiffs are allowed to take some of your belongings to sell on to cover certain debts, including unpaid Council Tax and parking fines.

They can, for example, take so-called luxury items such as TVs or games consoles. However, they cannot take essentials such as fridges or clothes.

What's more, they can only generally enter your home to take your stuff if you leave a door or window open or invite them in.

You are therefore within your rights to refuse them access and to ask for related documents such as proof of their identity. If they try to force their way in, you can also call the police to stop them.

Private sector debt collectors do not have the same powers as bailiffs, whatever they tell you.

They cannot, for example, enter your home and take your possessions in lieu of payment.

In fact, they can only write, phone, or visit your home to talk to you about paying back the debt. As with bailiffs, you can also call the police if you feel physically threatened.

Thanks to the Distance Selling Regulations, you actually have more rights buying online or by phone than on the High Street.

You can, for example, send most goods back within a week, for a full refund (including outward delivery costs), even if there's no fault.

You will usually need to pay for the return delivery, though. The seller must then refund you within 30 days.

We enter into contracts all the time, whether it be to join a gym, switch energy supplier or take out a loan.

In most cases, once you've signed a contract, you are legally bound by it. In some situations, however, you have the right to cancel it within a certain timeframe.

Credit agreements, for example, can be cancelled within 14 days. And online retailers must tell you about your cancellation rights for any contract made up to stand up legally.