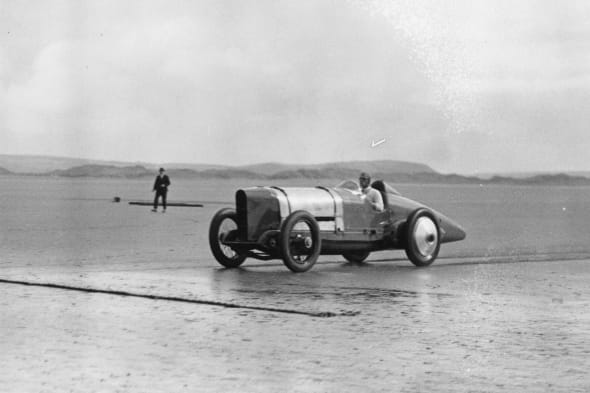 Blue Bird, the car that broke the world land speed record in 1925, is to return to the Welsh coastline 90 years to the day that it made history.
The National Motor Museum is recreating the event, which saw Sir Malcolm Campbell reach 150.76mph on Pendine Sands, and became the fastest person ever to travel on four wheels.

The 350bhp Sunbeam, which was the first in a line of Blue Bird world-record machines, will be driven by Campbell's grandson Don Wales, who is himself a land speed record holder. Unfortunately, however, he won't be wringing the car out on the shifting sands, but instead will be carrying out low-speed demonstration runs and recreating some of the iconic photographs from the original run.

Blue Bird was well placed to clinch the world record back in 1925, being born in the mind of Sunbeam chief engineer Loius Coatalen, and fitted with an 18.3-litre V12 engine taken from a military aeroplane.

The car managed to claim three world land speed records, the first in 1922 when it managed 133.75mph.

However, it wasn't until Campbell acquired the car, renamed it (and painted it blue) that it managed 146.16mph in 1924, before achieving its highest top speed in 1925.

The car was the sold, passing to various owners, before being purchased by Lord Montagu for his Beaulieu-based National Motor Museum in the New Forest, where it was gradually restored.

Speaking to the Telegraph, Wales said: "I am really looking forward to driving the 350hp Sunbeam, which is the car that gave my grandfather his first Land Speed Record. I cannot believe that I will get this fantastic opportunity to drive this iconic machine on Pendine. It will also be fun to dress in costume to look as my grandfather did in the pictures taken 90 years ago.

"My grandfather was a remarkable man and for us to remember him and honour some of his achievements in this way will be very humbling. I really must thank Beaulieu for this opportunity and for all the hard work the restoration team have done on her."

If you fancy watching Blue Bird taking to the sands once again, the event will take place at 4pm on July 21, and starts on the beach adjacent to the Pendine Museum of Speed.
Tags
Read Full Story Click here to comment