Miami Vice Ferrari Testarossa to go under the hammer 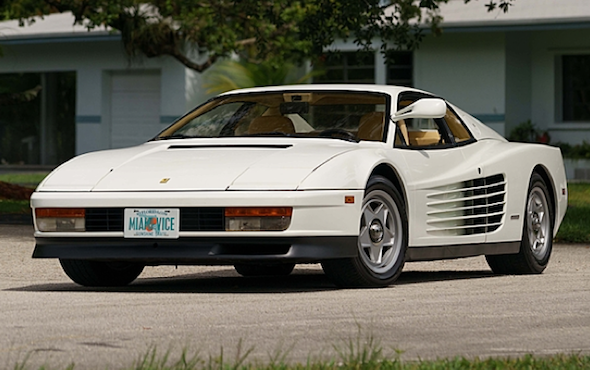 The hero car star of Miami Vice is up for sale and it looks better than ever.
With just over 16,000 miles on the clock, this Ferrari Testarossa was originally finished in black, but was sprayed white after the directors of Miami Vice found that the original colour was difficult to see in night scenes

It also comes with a beige interior, power windows and that all-important wired-in telephone. After the crime-fighting series ended in 1989, the car was put into storage where it has remained until now. It has only ventured out once in that time, to receive an engine-out service at a cost of just over £5,000.

The Testarossa came as a replacement for the Ferrari Daytona which was blown up at the end of the second series of Miami Vice. Two Testarossas were then supplied by Ferrari to Universal Studios for use on the show.

This particular example is an especially rare model as it is fitted with a single wing mirror, or 'mono specchio'. It is offered with a complete service history.

When Ferrari ceased production of the Testarossa in 1992, it had built almost 7,200 units, making it one of the marque's most popular models. Being able to reach 60mph in 5.2 seconds, it was also one of the fastest road cars of the era.

This Testarossa is being sold by Mecum Auctions on August 13-14 as part of Monterey Car Week and is expected to fetch over £150,000.

Miami Vice Ferrari Testarossa to go under the hammer
Up Next