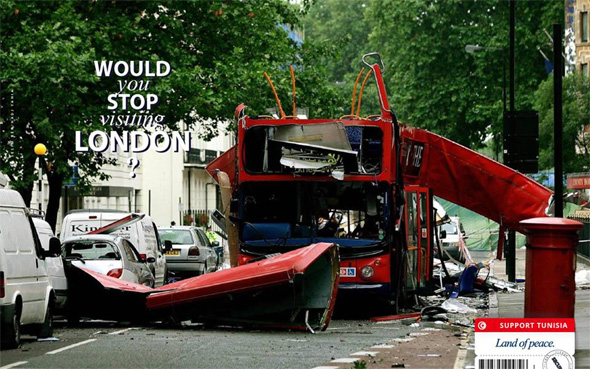 A communications agency in Tunisia has created an online campaign for tourism in the county featuring photos of the 7/7 attack in London and 9/11 in New York.

The ads ask 'Would you stop visiting London?' and include the words 'Support Tunisia, land of peace'.

The provocative campaign urges tourists not to boycott the country following last month's attack on a beach in Sousse which saw 38 people killed by a jihadi gunman.

Selim Ben Hadj Yahia shared the posters, which also include the Charlie Hebdo shooting in Paris, on his Facebook page. 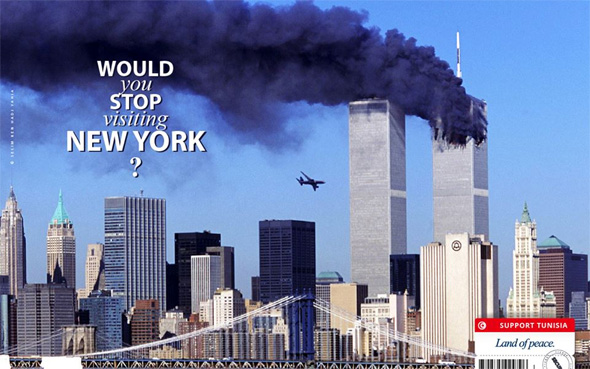 Speaking to IBTimes UK, he said: "We are all victims of terrorism. But in Tunisia the reaction we are getting is people saying: 'We are not coming anymore.'

"There is the impression that a war is ongoing in the country but that is not the case."

The Independent reports that the posters have been praised by some but others have criticised them as the attack in Sousse targeted tourists.

On its website, the Foreign Office states that there is a "high threat from terrorism" in Tunisia.

"On 4 July the Tunisian government announced it was reinstating the state of emergency, lifted in 2014, as part of its continuing response to the recent terrorist attacks."

It continues: "Further terrorist attacks are likely, including in tourist resorts, and by individuals who are unknown to the authorities, and whose actions are inspired by terrorist groups via social media. Attacks could be indiscriminate, including in places visited by foreigners. You should be especially vigilant at this time and follow the advice of Tunisian security authorities and your tour operator."

Is your holiday destination safe? FCO issues advice for holidaymakers