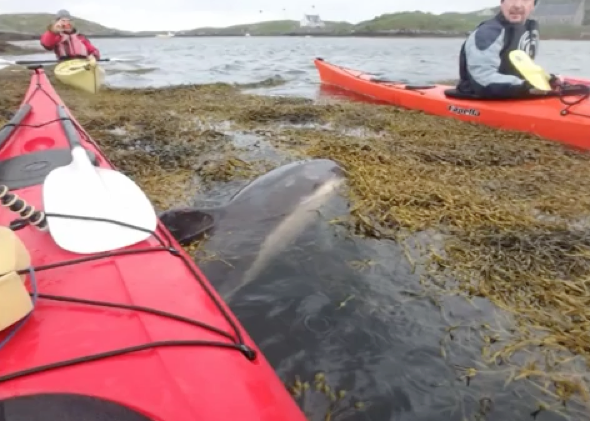 Three kayakers set about saving a young dolphin that had become trapped in seaweed - and were ultimately rewarded with a beautiful display of leaps from the water.

The group, from kayaking trip company Clearwater Paddling, came across the dolphin struggling and distressed in the Outer Hebrides.

One of the kayakers, Chris Denehy, tried to get as close as possible to the stricken animal to nudge it out with his oar while the others helped make a channel for it to pass through.

According to news.stv.tv, the kayakers were told about the trapped animal by a local postman.

Speaking to the Metro, Chris said: "He was literally drowning because the weed was pulling him under.

"He did seem quite distressed and must have been in there a while."

But after making his way back to his friends, the dolphin put on a little show to say thank you.

Chris uploaded the footage to YouTube, with the caption: "Three juvenile dolphins in Northbay on the Isle of Barra. One of the dolphins was completely trapped in seaweed and shallow water. After a successful rescue the dolphin joined the other two for a fine display of thanks!"

One happy user wrote: "Good to see there are still some caring people in the world!"

Dolphin trapped in seaweed 'thanks' kayakers after rescue
Pig Beach, or Pig Island, is an uninhabited island in Exuma, the Bahamas, famed for its many swimming pigs. They are said to have been dropped off on the island by sailors who wanted to return to cook and eat them, but never returned. Others say the pigs survived a shipwreck and managed to swim to the island. Today, the pigs are fed by tourists who visit the island to meet its unexpected residents.

"The little tarsier, nicely nestled in a leaf, suddenly opens its eyes!  They are nocturnal so what a surprise.  These tiny primates (3 to 6 inches) are found only in the Philippines and most of them are in sanctuaries.  This one was in a sanctuary in Bohol Island."

"The famous hall "Halle der Circe" is located at the end of the highest-lying touristic cave in the world (2100 m alt.), which can be reached only by experienced cavers. With proper lighting the permanent ice in the hall shines in beautiful blue tones, which add enchantment atmosphere to the frozen hall."

"The Moeraki Boulders are unusually large and spherical boulders lying along a stretch of Koekohe Beach. These boulders are grey-colored septarian concretions, which have been exhumed from the mudstone enclosing them and concentrated on the beach by coastal erosion."

"The island of Borneo, which is split between the countries of Malaysia, Indonesia, and Brunei, was once covered with a lush tropical rainforest, but in the wake of ongoing deforestation and the expansion of plantation farming, the habitats of the island's endemic and endangered species are being destroyed rapidly. Relentless deforestation has precipitated the loss of 90 per cent of the orangutan population in 100 years. At this rate, some expect this species to become extinct within the next 20 years."

"While foraging for food, sometimes Greater Flamingos get into mild altercation with their neighbours. This is one such moment when these two big guys bumped into each other. And when this happens, they both stand tall and bite each other's beak and continue to do what they were doing. While this is clearly a fight, the way they do this appears to be a romantic moment."

"On a summer night, in the colonial town of Santa Clara, Cuba, people hurry to get home before the storm."

"I visited Deadvlei in 2008. The personal emotional and spiritual connection I felt with "The Beginning" I know I had to return someday.  That time came in May 2015.  I knew I had to make a photograph that reflected how I felt during my first visit and on this visit.  I did capture it.  I fell it was not just a sense of place but a sense of time."

"This disorienting photo was taken from a cliff overlooking Lake Louise in Banff national park. The two people are enjoying a canoe ride on Lake Louise's turquoise waters."

'I was working at my family farm some 150 km from the Calbuco Volcano when a friend called me and told me what was happening. I took my camera and tripod and drove to Puerto Varas where a quiet chaos was ensuing and decided to keep on driving to a darker area. Upon arrival the volcano was quiet again, not even vapour was coming out, so, a little disappointed, I went to rest. Two hours later all hell broke loose and I could take some of the pictures I've been dreaming about ever since the Chaiten eruption in 2008.

"Every year, humpback whales come to Kingdom of Tonga during July to September. The mothers raise their babies and when they are enough strong they go far away to the cold water. During whale watching activity, you can live some incredible experiences by interaction with this fabulous mammal. This young calf played with me during 30 minutes under the control of his mother, a great memory!"

"This is taken at the volcanic beach at Stokksnes in south-eastern Iceland in February 2015. I used a 2-second exposure to capture the water trails as the waves receded over rocks at the edge of the beach, just as the sun was setting behind me, illuminating the mighty Vesturhorn mountain and some peaks in the far distance."

"There's nothing quite like being able to stand at the base of Niagara Falls as you feel and hear the thundering roar of the water as it falls over the edge and plunges 170' down to the Niagara River."

"Villarrica volcano, located more than 700 kilometers south of Santiago de Chile, has been erupting since 2003 is in eruption process. This photograph was taken last May 11 in the city of Pucon."

"While touring the waterways along the Antarctic Peninsula, we saw two Adelie Penguins watching their surroundings from the top of an Iceberg."

"The Rock restaurant is just off shore in Zanzibar.  As the sun set, I was taking photos of The Rock before going out there to have dinner.  As the light levels dropped, the light came on in the restaurant and I knew I had my shot."