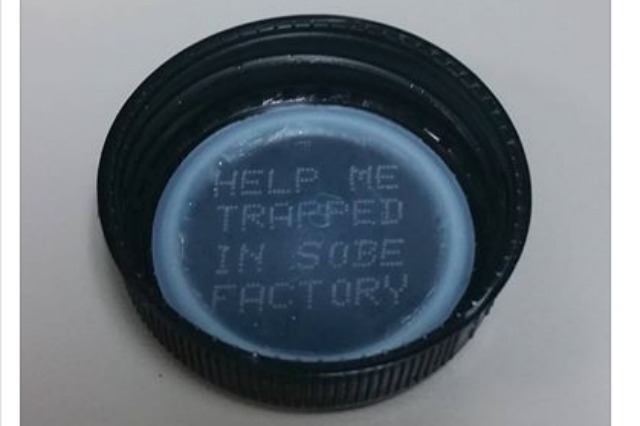 Drinks company SoBe has always taken a quirky approach to its packaging. Inside its bottle caps it prints unexpected messages like "Grab life by the lizard" or "Marry Me". However, in a recent release of new bottles, it included what it thought was a lighthearted message - which has ended up freaking its customers out.

The message reads 'Help me trapped in SoBe factory." Understandably it has left some people perplexed, and a number of people have posted a photo of the bottle top on social media, with a question as to whether they are meant to take this seriously.

Other customers appreciate that this is meant to be funny - but think it's anything but. After-all with millions of people around the world enduring forced labour under horrific conditions - including millions of children - it's no laughing matter.

Customers have contacted the company (owned by PepsiCo), which is responding to social media messages with an apology, reading: "Hi there. We're sorry that our cap slogan caused you concern, that was certainly not our intention. These sayings are intended to give our customers a smile or pause for thought, not offence, while they enjoy their favourite SoBe beverage. We are planning on removing this cap slogan from our current rotation, however, it will take a while for existing stock to run through the market."

As always when we hear about marking disasters like this, it leaves us scratching our heads wondering how this ever made it past the original brainstorm - let alone through multiple layers of checks and approvals, at which point someone thought "Yes, that's funny. There's nothing wrong with that."

The marketing hall of shame is full of things like this. In 2005, for example Snapple thought it would encourage New Yorkers to cool down on a hot day, so it erected the world's largest ice lolly. Unfortunately (and perhaps predictably) it melted before the press showed up, and the roads had to be closed to hose off the gloop.

A year later, the CEO of a company called LifeLock was so confident in his company's identity protection services, that he widely publicised his social security number - explaining that he knew his company would keep him safe. Naturally he became a huge target for criminals and hackers, and his identity was stolen a total of 13 times.

And in 2011 the South Australian government decided to send 55 goldfish to media executives to promote a tour by Advantage SA - with a message on the bowl saying: "Be a big fish in a small pond and come and test the water." Unfortunately not enough thought was put into the logistics of transporting fish, and most of them died on the way.

Not all PR disasters like this are distant memories. In May last year, the makers of a new computer game sent a journalist in Australia a safe with a note telling her to check her voicemail. She tried to open the safe, but it started to beep, so she called the bomb squad. The experts eventually opened the safe - and found a copy of the game.

In Moscow last year an advertising agency decided to promote the idea of advertising on the side of trucks. Their infallible plan was to paste a picture of a woman cupping her breasts to 30 trucks and drive them around the city. On the first day it caused 517 accidents, and the company was forced to offer to pay for repairs for anyone who wasn't covered by insurance.

Is Taylor Swift really insuring her legs for $40 million?

A free cat with every mortgage: odd cat promotions

"A woman is only a woman but a good cigar is a smoke". Only a woman? Feminists would take issue at the "only" adverb, and the idea that any human being of either gender is inferior to a cancer-inducing product from Benson & Hedges.


Don't blame the ad men completely. That ad tag line is actually the evil work of one Rudyard Kipling. From a poem he penned called "The Bethrothed".

Now this is a creepy ad: "I have created a playground for men's hands." Armando Ghedini created wigs "for other men who adore women". This wig was also wash'n'wear. Nice.


The thoughtful signor Ghedini had also designed a wig to be combed in any direction, "for men to tousle". Men, he said, become "inspired" by women who wore it and women, Ghedini added, were grateful.

VW advertising has often been self-deprecating and clever. In 1960s America their ads were phenomenally successful, persuading thousands of Americans to ditch large thirsty home-made offerings for the company's cramped, noisy but economical Beetle.

Their ads flattered the intelligence of the American middle class. But this ad depicing a bashed-up VW bug? "Sooner or later your wife will drive home one of the best reasons for owning a Volkswagen". Not their female customers, clearly. What were they thinking?

Similarly, Easyjet also thought that a pair of ample breasts would be enough to help ticket sales. This ad dates back to 2003 when George Bush, Dick Cheney and Tony Blair were getting very animated about those hard-to-find weapons of mass destruction.


This particular ad garnered around 200 complaints to the Advertising Council and also escaped any ticking off. And plenty of publicity of course. It all worked out beautifully for Easyjet. Tits away, Stelios.


Where are Olivetti now in the global brand firmament?. Join the Olivetti girls. At ease, ladies, please.

Melon distributor F.H.Hogue of California thought his melons were pretty buxom and wanted to spread the word. Ho-ho, Mr Hogue.

There are plenty more examples and we'll be looking at more anther time. In the meantime let's leave with a woman knowing exactly where she should be (in the home, honey).

Here is a 1970s shoe ad from a brand called Weyenberg. You may find it hard to track down a Weyenberg shoe today however.

However, not all car makers followed such a well-worn patronising path. Back in the 1970s Honda in the US reversed the idea that women always needed cars with simple, easy-to-drive automatic gearboxes.


Despite offering both a manual and auto gearbox, neither was "a women's car" Honda stated firmly. Note the jaunty hat and jeans. A stab at selling to the US lesbian community? Or an independent straight girl fed up with stereotypes. Good for Honda.