Maserati written off by spilled paint 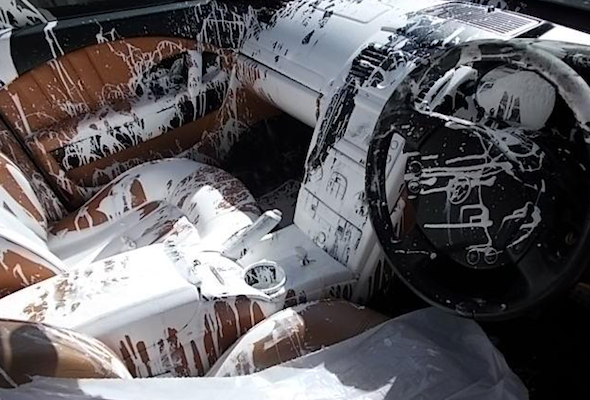 A Maserati driver has managed to write off their luxury sports car after accidentally covering the interior in paint.
The hapless owner, from South Australia, had swerved to avoid a dog that had run into their path, when the lid dislodged from the paint tin, which was perched on the rear seat.

The damage done by the paint was so extensive that the vehicle was written off by insurers RAA Insurance, with the claim later settled for more than $90,000 (£43,700).

Claims Manager for RAA Insurance Hayley Cain described how the paint tin then flew through the air.

"As the tin flew around the car like a mini tornado, the leather interior and windscreen were liberally splashed with a thick coat of white paint," she told the Daily Mail.

"Fortunately the driver was fine, but given the extent of damage to the interior, our insurance assessors declared it a write-off and we settled the claim for over $90,000."

As bizarre a reason for a write-off as an errant paint can is, however, RAA Insurance has encountered numerous cases of cars being damaged in strange circumstances, including a Toyota Land Cruiser, which had its electrical systems destroyed by hungry rats, and a Mercedes convertible that had a coat hanger lodged in its roof mechanism and housed a parrot that ate its way through the interior trim.

"Truth can be stranger than fiction with flying paint tins, hungry rodents or destructive coat hangers but sometimes it's the apparently straightforward claims that have experts smelling a rat," Ms Cain continued.

"Fortunately most claims are genuine and our assessors are attuned to spot any signs of dishonesty."

Have you ever submitted an eyebrow-raising insurance claim? Let us know in the comments section below.
Tags
Read Full Story Click here to comment