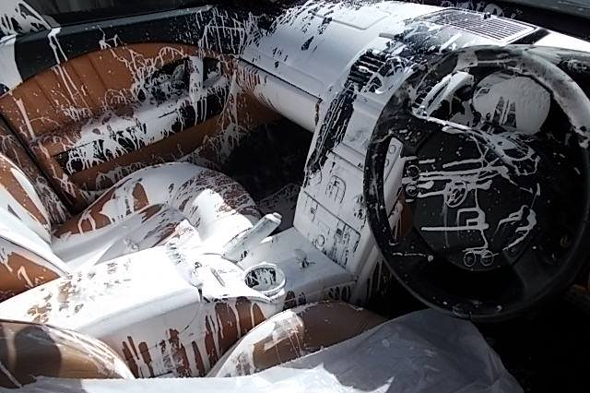 A Maserati was written off when it was covered in white paint after the driver swerved to avoid hitting a dog in the road in South Australia.

RAA Insurance says the motorist was driving with a tin of white paint on the back seat and when they swerved to miss the dog the lid dislodged from the tin and the paint flew through the air.

The insurance company posted the photo on Facebook and wrote: "What a disaster! If you get a new paint job for your Maserati, make sure it's on the outside (lucky he was insured....)"

Claims manager Hayley Cain told ABC: "The driver swerved to avoid a dog and the tin of paint he'd set on the back seat flew through the air dislodging the lid," she said.

"As the tin flew around the car like a mini tornado, the leather interior and windscreen were liberally splashed with a thick coat of white paint."

According to The Australian, Ms Cain said the driver was fine but "given the extent of damage to the interior, our insurance assessors declared it a write-off and we settled the claim for over $90,000 (£43,750)".

In November last year, a hilarious video emerged of a Lamborghini driver setting his car on fire in London's Sloane Street.

As the owner attempted to impress a crowd with this new toy, the supercar caught fire and he was forced to put it out using his jacket. When this didn't work, he sped off in the car with the back of the car still on fire.

North Yungas Road, or Death Road as it's also known, is legendary for its extreme danger. In 1995 it was named the "world's most dangerous road" by the Inter-American Development Bank. The 61km road leads from La Paz to Coroico in Bolivia. Up to 300 travellers are estimated to be killed on the road each year and cross markings along it show where vehicles have fallen. What makes it so dangerous? It's a single-lane road with no guard rails and cliffs up of 600ft. During rainy season, rain and fog severely hampers visibility and the road quickly becomes a muddy track. In the summer, there are rockfalls and dust limiting visibility. If you dare take your eyes off of the road, the rainforest scenery is breathtaking and and thousands of thrill-seekers, particularly mountain bikers, ride it each year.

In Alaska, the James Dalton Highway is a 414-mile gravel road that certainly wasn't built for normal cars. Drivers braving the road share it with huge lorries that kick up clouds of dust or mud and reduce visibility. Then there are potholes taking a heavy toll on cars and virtually nowhere to stop for petrol. We wouldn't recommend driving the Dalton unless you have a 4x4, extra fuel, food, spare tires and blankets to survive the cold.

It takes someone brave to drive or walk along this terrifying 'cliff corridor' road in China's Henan Province. The 1,250m long Guoliang Tunnel was chiselled and hammered out of the mountain 40 years ago by 14 villagers from the nearby Guoliang village. It is five metres high and four metres wide and placed 110 meters up the cliff face. Along the tunnel there are 35 window-sized holes, from which rock was dumped during the construction process and now show the beautiful views from the road.

The A537 between Macclesfield and Buxton was named the most dangerous road in Britain, based on the number of serious collisions. Punishing bends, steep drops from the highway and sheer rock face for most of its length make the A537 a scary drive. Most crashes take place during the weekends in the summer - a popular time for tourists who are most probably checking out the stunning Peak District scenery than keeping their eyes fixed on the road in front of them.

This mountain road in western Norway offers drivers a dizzying view of sheer mountainsides, deep fjords, waterfalls and fertile valleys. The Trollstigen Mountain Road has a steep incline of nine per cent and consists of 11 hairpin bends. Encircling the road are lofty mountains with majestic names such as Kongen (the King), Dronningen (the Queen) and Bispen (the Bishop). At the 700-metre plateau is a car park and a number of viewing platforms overlooking the bends and the Stigfossen waterfall.

The M56 Lena Highway, or the Amur-Yakutsk Highway, in Russia runs parallel to the incomplete Amur Yakutsk Mainline railway and although it is a federal highway, it's actually just a dirt road. When it is frozen in the winter it makes an excellent surface, but in the summer, any significant rain makes the road turn to mud, often swallowing small vehicles whole! On the Lena Highway, traffic jams last for weeks and become a mess of vehicles stuck in the middle of nowhere.

The second highest paved road in Romania was built as a military route and consists of 90km of twists and turns running north to south across the Southern Carpathians. Due to snowfall, the Transfagarasan is open just a few months of the year, and even in June snow can block the roads. The scenery is spectacular and includes the twisted monastery at Curtea de Arges, the Dracula Castle ruins at Poienari and the huge Vidraru Dam.

Italy's Stelvio Pass in the Ortler Alps is the highest paved mountain pass in the Eastern Alps and may not be the most dangerous road in the world, but is said to be one of the most thrilling. At 9,045 feet this famed road features 48 hairpin turns on the northern side and 12 on the southern side, taking you through stunning Alpine scenery and many kilometres of fast and sweeping roads. If you own a bike, this road was built for you.

Connecting China and Pakistan across the Karakoram mountain range, the Karakoram Highway is the highest paved international road in the world with an altitude of 15,395ft. Known informally as the KKH, it is often referred to as the ninth wonder of the world due to its high elevation and the difficult condition in which it was constructed. Drivers on the highway are troubled with landslides, floods and mud. More than 1,000 workers were killed during the building of the highway.

This road in New Zealand is as narrow as they come and was cut in the middle of a sheer cliff face 140 years ago, making it unbelievably scary. Constructed to give miners access to a gold-rich canyon, today Skippers Canyon Road's motorists must apply for a permit before attempting to tackle it. Most car insurance companies won't cover you in the event of an accident and the soft rock crumbles easily under car tires, getting slippery when wet too.

If having to be cautious of other motorists wasn't enough, on Gibraltar's Winston Churchill Avenue you have to watch out for planes too. The road cuts through the airport, used by passenger and military planes alike. It's the only road connecting Gibraltar to Spain and is by far, Gibraltar's busiest road so there's no escaping the drive among jumbo jets if you want to enter or exit the territory by road. Every time an aircraft lands, the road is closed for a few minutes and railroad-style crossing gates hold back the cars.

Lamborghini burnt to a crisp in fire outside luxury Dubai hotel

Ferrari worth £240k gets stuck on beach in Cornwall

Why you should never drive a Maserati with a tin of paint on the back seat
The next time you’re in Belarus, be sure to keep your car clean as driving a dirty one is against the law.
In France, although the law imposing an 11 euro fine has been postponed indefinitely, you are legally required to carry an unused  self-test breathalyser in your vehicle.
Expect spot checks of your GPS system in Germany. Police check to see whether it has been set up to alert drivers to where  speed cameras are - if it is you’ll be asked to turn it off.
In Cyprus, you are not allowed to eat or drink anything while driving – the “no drinking and driving rule” doesn’t just apply to alcohol, but soft drinks too.

In Italy, you will be fined for driving into a historic zone, or Zone Traffico Limitato (ZTL), without the correct permit.

If you require prescription glasses to drive, you'd better ensure you have a spare pair in your car next time you’re driving in Spain, otherwise you are breaking the law.
You can be given a ticket for driving too slowly in the USA.

It is strictly taboo to drive without a shirt in Thailand, and doing so could result in a fine.

In Denmark, it’s compulsory to check under your car for people before setting off on your journey

Traffic in Manila, Philippines, is so bad that you are not allowed to drive your car on certain weekdays. Registration plates ending in a 1 or 2 are banned on Mondays, 3 or 4 Tuesdays, 5 or 6 Wednesdays, 7 or 8 Thursdays and 9 or 0 Fridays.
In California, it is illegal for female motorists to wear a dressing gown behind the wheel.
Up Next