Top five attractions at the Goodwood Festival of Speed 2015 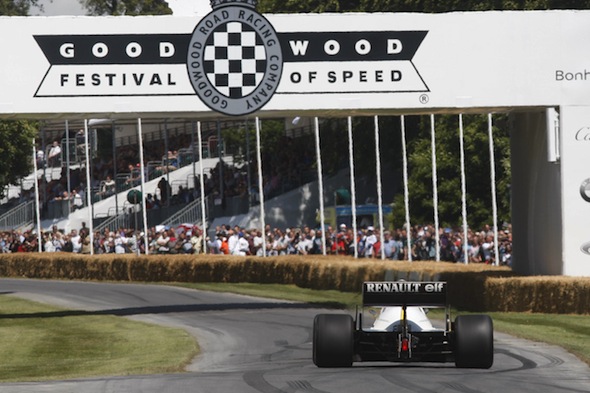 Today, this year's beloved Goodwood Festival of Speed opened its gates, in true tradition, with the annual Moving Motor Show, where UK motorists can turn up and try out the latest cars from their favourite manufacturers.
But don't worry if you couldn't get away from the office today, because there's plenty to see and do at Goodwood over the next three days. In fact, the glorious problem with the Goodwood Festival of Speed is that it spoils us; there's almost too much to see and little time to squeeze it all in it.

So, to make sure you don't miss out on any of the exciting activities, from the heart-throbbing classics to the modern machines, we've pulled together a list of the top five attractions to see at this year's event.

Catch a glimpse of Formula 1 cars past and present

Throughout the weekend, a line-up of motorsport's most prestigious (not to mention priceless) Formula 1 cars through history will be on display in the F1 paddock. Representing the brutal days of the sport back in the 1950s, to the very latest engineering masterpieces, spectators can get up close to F1's most cherished racers, before watching them in action of Goodwood's famous hill climb. Ferrari, McLaren, Mercedes, Red Bull and Williams will be there, with a special category celebrating the 'fearless but flat-broke' F1 drivers and teams who took on grand prix racing's top names, despite limited resources and minimal funding.

This year's masterpiece represents the 18th sculpture to be created on the lawn outside Goodwood House by London-based sculptor, Gerry Judah. Keeping in tradition of celebrating the spirit and core values of a single manufacturer, this year's creation focuses on Mazda. The Japanese manufacturer's feature represents the brand's motorsport heritage, consisting of a flame-like structure formed as a stack of enormous steel piers, in traditional Japanese style, which weaves as it climbs and cantilevers away from the Georgian period house, to suspend two of history's most revolutionary Mazdas: the 787B Le Mans winner and the LM55 GT1 concept car.


Become mesmerised by the art of drifting

Marking yet another first at the Festival of Speed, this year's event will host a special category dedicated to admiring the art of drifting. You won't need to think too hard to guess who'll be headlining this skilful show for, anyone who's been glued to the computer screens watching his 850bhp Ford Mustang dubbed 'Hoonicorn', will be more than familiar with festival stalwart Ken Block. He'll be putting on a show (which we're sure will be pretty awesome) up the hill on Saturday and Sunday alongside a number of the discipline's biggest names.

It wouldn't be the Festival of Speed without a hefty number of world's most ludicrous and stylish supercars parading up the Goodwood hill. Unlike the F1 paddock, you may have to go on a bit of a treasure hunt to find ALL of them, since they're scattered in various locations on the Goodwood grounds. But, as a good starting point, we'd suggest heading over to the Michelin Supercar Paddock, which is where the cars destined to take to the hill can be found. To make sure you catch them on action, grab a spot close to the start line, where you can watch as they drop the clutch and carry a cloud of tyre smoke down the straight. A handful of these exotic cars will be going head-to-ahead against the clock on Saturday, including the track-focused McLaren P1 GTR, the Honda-powered Glickenhaus SCG 003, the Aston Martin Vantage GT12 and the Koenigsegg's 1500bhp Regera.

Kicking up the dust on the rally course

You can't go to the Festival of Speed without getting some dust in your eyes up at the forest rally stage, which is why you should definitely make time for some sideways actions over the weekend. The 1.7-mile stage is treacherously narrow in places and layered in chalk and gravel, all stringed together with some tight, technical corners (lined with trees) and fast straights. You know it's a good layout, since it was designed in partnership with 1983 World Rally champ Hannu Mikkola. You will have to walk 30-40 minutes to get there, on the right-hand side of the hillclimb – which won't sound too appealing in the heat – but we can assure you, it'll be worth it. Or, if you're really lazy, you can jump on the back of the shuttle tractor, which is quite an adventure in itself. In whichever way you decide to travel, you will eventually be greeted by rally cars from every era, starting with the Mini Cooper S and Ford Escort RS1600 straight form the '60s and '70s to the latest Citroën DS3 and legendary Impreza World Rally champs.