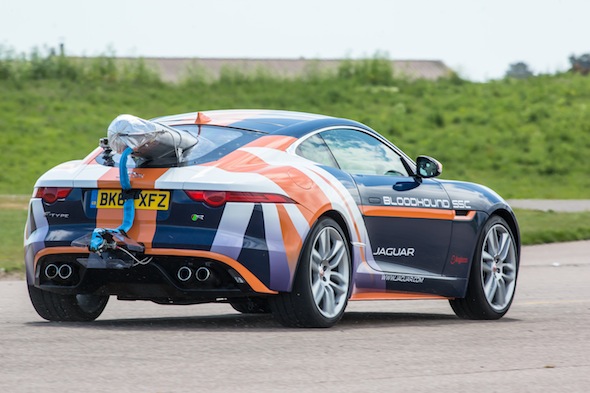 After years in the planning, the Bloodhound SSC land speed record car is slowly edging towards becoming a fully-operational reality.
The team behind it has had to overcome huge engineering challenges, as they charter unknown territory in their quest to break the 1,000mph mark.

As technical partner to the Bloodhound project, Jaguar is lending a hand to the car's development. The Midlands brand has released a new video showing its flagship F-Type R Coupe sports car testing the parachutes that will slow the rocket-powered car during the record-attempt on the desert sands in South Africa.

Taking to the wheel of the F-Type was wing commander Andy Green, the man who's hoping to propel himself into the history books.

As far as conventional automobiles are concerned, the F-Type is well placed to test the parachute braking system, with its 542bhp supercharged 5.0-litre V8 engine able to propel it up to 186mph.


Green said: "Bloodhound SSC is fitted with both airbrakes and parachutes to provide guaranteed stopping power under all conditions. Each of these systems is safety-critical and each needs to be tested to ensure it will work safely, every time it's needed.

"Being able to validate the parachute systems in a safe and controlled manner using a high performance Jaguar F-Type sports car gives great confidence to both me and Bloodhound's engineering team."

The testing run, which you can view below, appears to go smoothly, though we're slightly wary of Green's assertion that if the parachute works at 180mph, they will "definitely work at 1,000mph". We can only wait and see.