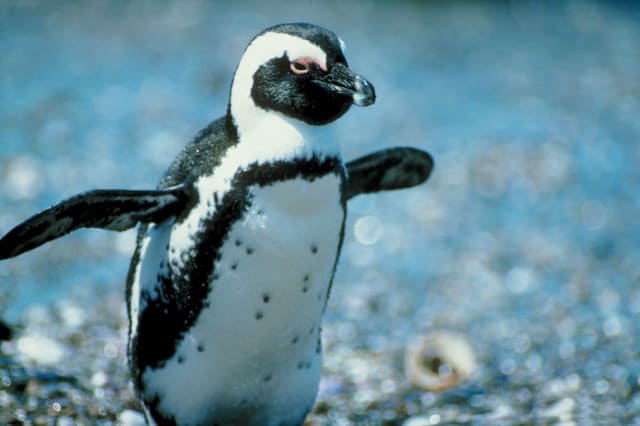 This cute video shows a traveller getting surprisingly up close and personal with a wild baby penguin.

Penguins seem to have no fear of humans, and have often been known to approach groups of explorers without hesitation. This is believed to be because penguins have no land predators in Antarcticaor the nearby offshore islands. Instead, adult penguins are at risk at sea from predators such as sharks, orca, and leopard seals.

Usually, penguins don't get closer than three metres (9.8 feet), at which point they become nervous. This is the distance that tourists in the Antarctic are told to keep from penguins (tourists are told to withdraw if the penguins come closer).

In June 2011, a penguin came ashore on New Zealand's Peka Peka Beach, 3200 km off course on its journey to Antarctica. Nicknamed Happy Feet (after the movie of the same name) it was suffering from heat exhaustion and had to undergo a number of operations to remove objects like driftwood and sand from its stomach. Happy Feet was a media sensation, with extensive coverage on TV and the web, including a live stream that had thousands of views and even a visit from English actor Stephen Fry. He was returned to the wilderness in Antarctica after recuperating in New Zealand.

Wild baby penguin befriends man on beach (video)
South India serve the New Year's festival of Pongal. They like to makeup and dressing for livestocks including cows and goats. I met this colorful goat who standing at shabby pink wall. It pretty seems like an oil painting.
Cuba is changing. There is no doubt about that. And change is usually for better right? American dollars will start flowing, the tourism industry will develop along with countless of othger great changes. The younger generation can not wait, I'm sure. But what about the older generation left behind?
This is taken at the volcanic beach at Stokksnes in south-eastern Iceland in February 2015. I used a 2-second exposure to capture the water trails as the waves receded over rocks at the edge of the beach, just as the sun was setting behind me, illuminating the mighty Vesturhorn mountain and some peaks in the far distance.
I waited all day in the kelp for this shot and after many failed attempts to catch the air time that these little guys were getting, this one finally got skyrocketed high enough. He or she proceeded to do an epic face plant, which I found was the standard style of penguin landing. They are the most entertaining creatures to photograph and kept a smile on my face throughout the course of my two-week excursion to the Falkland Islands. This photo was taken on Bleaker Island.
Igorots "mountain people" . Here a proud man stood before me dressed like his ancestors did  trying to keep their traditions alive.
On a trip photographing southern Chile, recently landed in Puerto Varas, I meet this strong show... Incredible, Amazing and terrifying in the same way.
I took this photo while the football Brazilian team was playing for the world cup, the beaches and the streets were all deserted, everyone was watching the game, it was kind of surrealistic to see this usually crowded beach at sunset completely empty except this kid who was playing in the waves, maybe he couldn't have access to a tv or maybe he just didn't care, anyway he was really enjoying the beach for himself and so did I!
I photographed the woman who finished shellfish fishing in the evening of the day of the flood tide.
Up Next

'Gay' penguins get their own eggs to look after