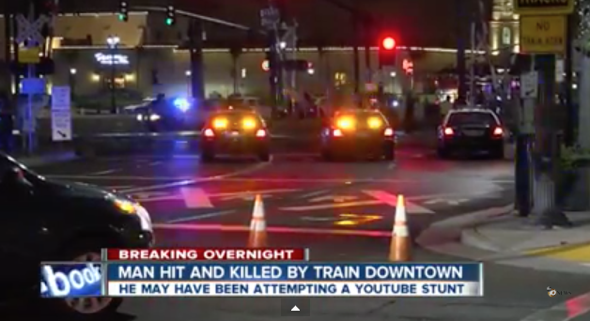 A man has been killed by a freight train in what appears to have been a stunt attempt gone wrong in San Diego.

The man, thought to be in his 20s or 30s, seemed to be trying to roll under one side of the train and out the other side as it drove by, reports Fox 5 San Diego.

He was "cut into pieces" by the northbound Burlington Northern Santa Fe freight train, which was only travelling at 10mph.

According to the Guardian, Detective Ed Macken, from San Diego County Sheriff's Department, said: "He was be-bopping back and forth and there might have been phones up recording.

"He was trying to do a manoeuvre to shoot under a train and it didn't work."

He said the death highlighted a problem with accessible train corridors in San Diego, adding: "We've had 22 train suicides and accidents in the last year-and-a-half.

"We don't think this one was a suicide, but they all make a big mess."

According to the Las Vegas Review Journal, passenger and freight trains in both directions were stopped for hours while officers tried to find witnesses and work out what had happened.

Macken added: "We're still looking for witnesses. What we know was he was crouched down, bobbing back and forth and then he went for it. Sixty train cars went by and then he rolled under the last two."

Rail passenger gets stuck in toilet, tweets for help

Fans can return to live sport next week but who can go and where can they do it?