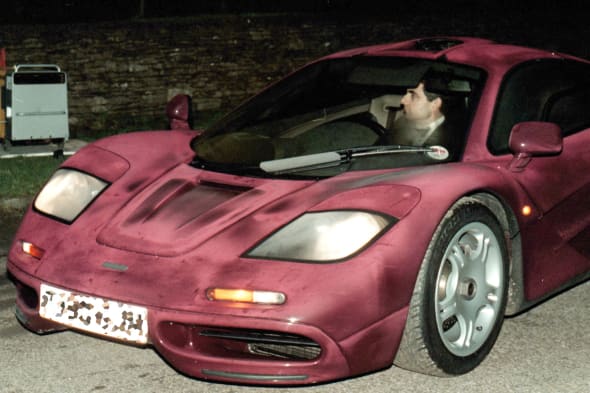 After 17 years and 41,000 miles, Rowan Atkinson has made himself a tidy profit selling his McLaren F1 supercar.
The actor and comedian bought the iconic model, which was for many years the world's fastest production car, for around £540,000 in 1997. It was sold for an undisclosed amount after being advertised for £8 million with specialist dealer Taylor and Crawley.

The F1 has become increasingly sought after by well-heeled car enthusiasts for its exclusivity, unique design, engineering and crushing performance – meaning prices have risen dramatically in the 18 years since its debut.

Which is just as well for Atkinson, who crashed his F1 on two separate occasions. One incident in 2011 was thought to be the biggest-ever single car insurance claim, after his insurance company was handed a repair bill of £910,000, after the car left the road and got stuck in a hedge in Oxfordshire.

Atkinson recently decided to sell after the F1 became "a thing of value", reckoning it was someone else's turn to enjoy the car.

Taylor and Crawley boss David Clark confirmed that the car had been sold. Speaking to the Telegraph, he said: "Everyone is very pleased with the sale. There was interest from around the world and it has gone to a British buyer who will drive it like Rowan did.

Although the final purchase price was not revealed, if it sold for the £8 million asked, the F1 would be one of the most expensive cars ever sold in the UK, only being beaten by classic 1960s Ferraris.

Despite the car's ferocious performance – it could crack 241mph and get from 0-62mph in 3.2 seconds – Atkinson was famed for using the F1 as a daily driver, and would often be seen taking his children to school in it.

Mr Clark went on to describe Atkinson as "one of the most enthusiastic car owners I have ever met, a real user of his cars and that is how he derives his enjoyment: from the using, not the having".
Tags
Read Full Story Click here to comment