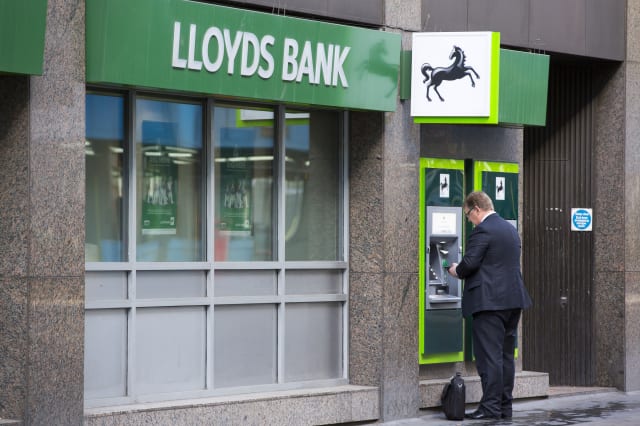 State-backed Lloyds Banking Group was today fined a record £117 million by the City regulator for the way it handled complaints over the mis-selling of payment protection insurance (PPI).

Lloyds apologised to customers affected and said £2.65 million worth of bonuses was being withheld from executives as it agreed the settlement with the Financial Conduct Authority (FCA). The group bonus pool for this year will be cut by £30 million.

The fine relates to a period from March 2012 to May 2013 when the group assessed customer complaints relating to more than 2.3 million PPI policies and rejected 37% of those - many of them wrongly.

"As a result of Lloyds' misconduct, a significant number of customer complaints were unfairly rejected," the FCA said.

The fine is the largest ever retail banking penalty imposed by the authority - other larger charges have related to trading scandals such as Libor benchmark rate-rigging and foreign exchange rate manipulation.

Georgina Philippou, acting director of enforcement and market oversight at the FCA said: "PPI complaint handling is a high priority issue for the FCA.

"If trust in financial services is going to be restored following the widespread mis-selling of PPI, then customers need to be confident that their complaints will be treated fairly.

"The size of the fine today reflects the fact that so many complaints were mishandled by Lloyds.

Lloyds, which remains nearly 19% owned by the taxpayer after being rescued during the financial crisis, has already set aside £12 billion to cover the cost of compensating those mis-sold PPI.

Chief executive Antonio Horta-Osorio said: "We made mistakes in our handling of some PPI complaints. I am very sorry for this. We have been working hard with the FCA to ensure all customers receive appropriate redress.

"That process is now substantially complete. We remain fully committed to improving our operational procedures and ensuring we do the right thing for our customers."

Could you be a victim of the new ID fraud trend?

6 PHOTOS
How to dispute your credit record
See Gallery

Don't wait until you need to apply for credit to view your credit record – do it now so you know where you stand and can deal with any disputes. When applying for credit, you give the lender permission to view your record, so it makes sense to view it yourself first.

You can access your record via any of the main credit agencies in the UK. By law, all the credit agencies are required to provide you with a one-off copy for just £2 so don't be hoodwinked into signing up to pay a monthly fee.

Your report shows what credit accounts you've had and whether you've made repayments on time and in full. According to Experian, items such as missed or late payments stay on your credit report for at least three years, while Court Judgments for non-payment of debts, Bankruptcies and Individual Voluntary Arrangements stick around for around six years.

Your credit report shows the current address at which you are registered to vote as well as details of other addresses you've been linked to in the last six years. Another section lists people you have a financial connection with, such as a joint mortgage. When you apply for credit, lenders are able to look at their credit history as their circumstances could affect your ability to repay what you owe.

Scrutinise your record to make sure there are no mistakes. Even a minor error such as an incorrect address or wrongly linked account could hinder your chances of being approved for credit so make sure all your details are correct and that all your borrowings are on record. If there is a discrepancy, contact the three main credit agencies to get it corrected.

A default notice is note that a lender puts on your credit file if you fall behind with your payments. It is a warning sign to future lenders about your reliability to repay credit and could mean that they will be less likely to lend to you or will increase the interest rate.

If the default notice is incorrect, perhaps because you have repaid the loan in full or did not take out the credit and suspect that you have fallen victim to fraud, you can apply to have a default notice removed. A default notices will only be removed if it is factually incorrect – not simply because you are embarrassed by it.

Start by writing to the agency asking it to either remove or change the entry that you think is wrong. It will investigate the matter and find out whether you have been the victim of ID theft or a bank's mistake.

Within 28 days from receipt of your letter the agency should tell you how the bank has responded. If the bank agrees to change the entry, they will authorise the agency to update their records. They should also send updates to any other credit reference agencies they use.

You can also contact your lender directly to query a mistake. If the lender agrees to the discrepancy, ask them to confirm this in writing on their letterhead and send a copy to the agency, asking them to update your file.

If you are unhappy with the response or would just like to explain a missed payment on your file you can send a Notice of Correction. This is a statement of up to 200 words that will be added to your file. Although lenders don't have to take this information into account, it at least gives you the chance to tell your side of the story.

Experian states that agencies will also help you escalate the dispute to a third party arbitrator if necessary, such as the Information Commissioner's Office.