The world's most colourful neighbourhoods 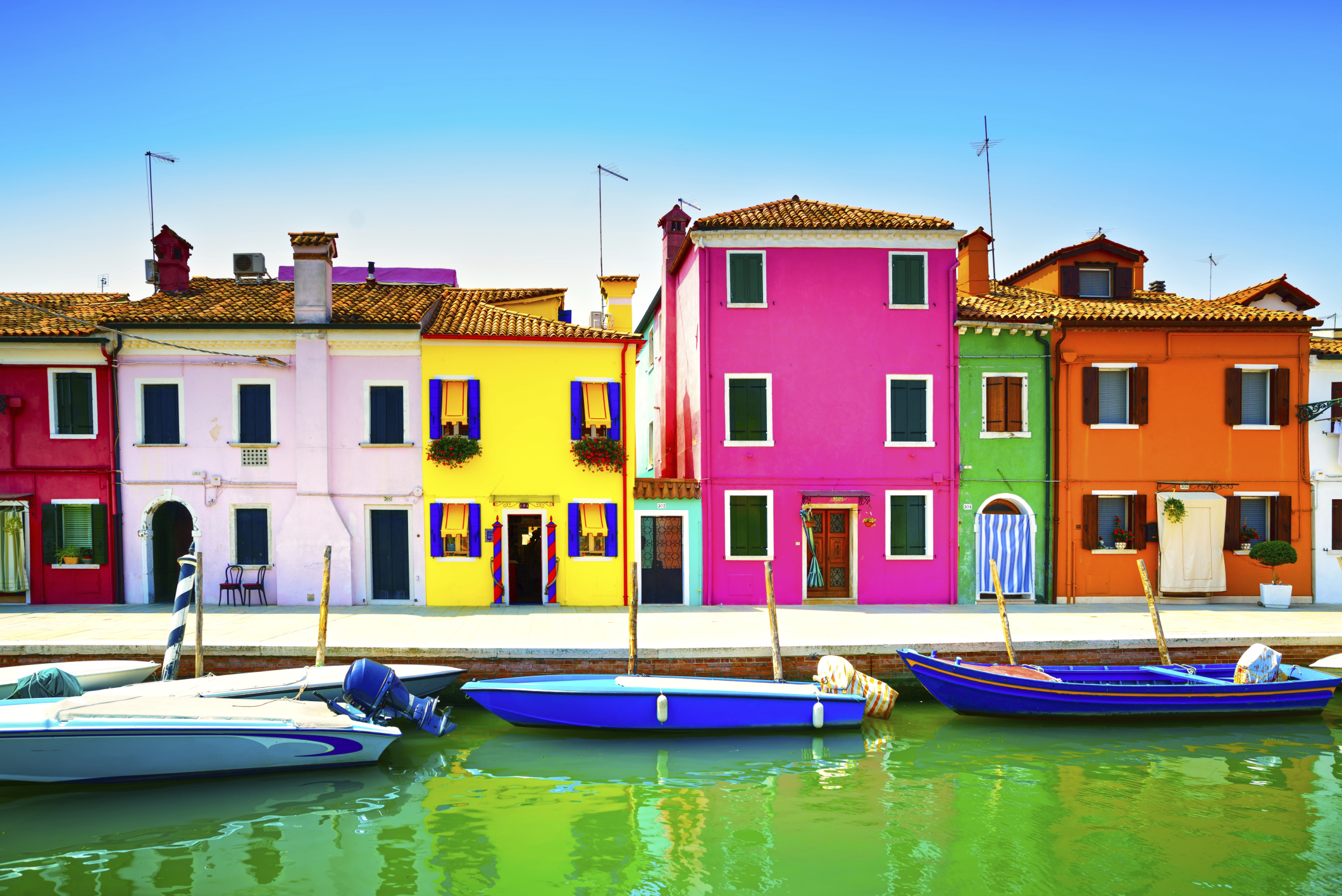 Question: What do the Old town of Jaipur, the shipyards of Buenos Aires and the Mayor of Tirana have in common?

Answer: They've all helped create some of the most colourful neighbourhoods in the world.

To celebrate some of the prettiest, most vibrant wonders of the urban world, we got together with our friends at travel search site Momondo to find the cream of the crop, all of them dazzling - and many of them eccentric - in their own way. 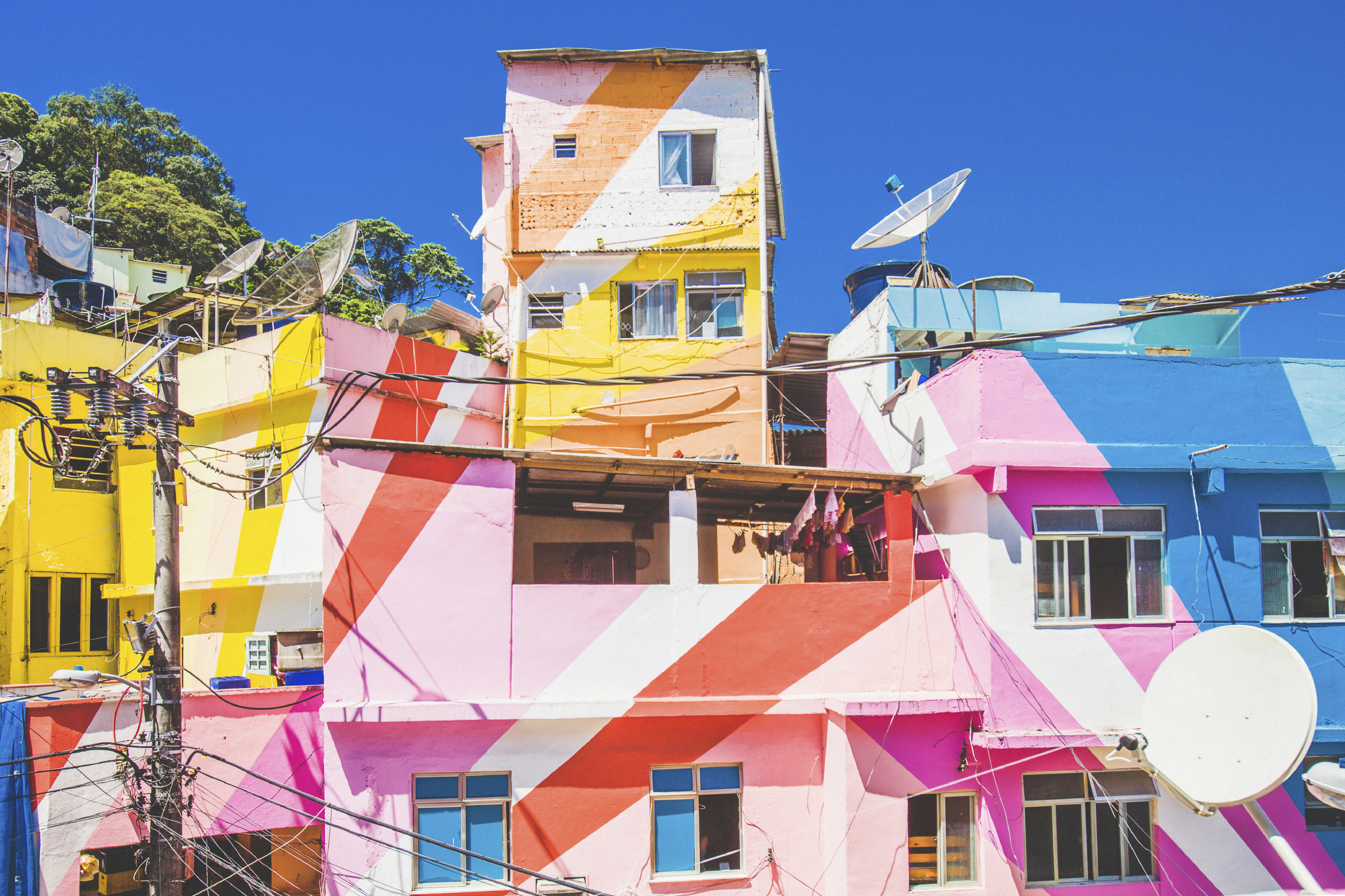 It would be an exaggeration to say that the ghettos of Rio de Janeiro are blessed with a winning reputation. But this is something the artist duo Haas & Hahn have been trying to transform with their project, Favela Painting.

Equipped with nothing more than some government grants, a few thousand gallons of paint and the help of skilled locals, these once-ramshackle neighbourhoods have been given a new lease of life, with anything from a single mural to a whole street transformed with a beaming blast of colour. In Rio's south zone, the artists painted parts of the Santa Marta favela in rainbow-bright colours to boost community pride and spirit.

With the ongoing project now in its 10th year, the winning artist duo have taken their paintbrushes to the US to clean up the streets of Northern Philadelphia. 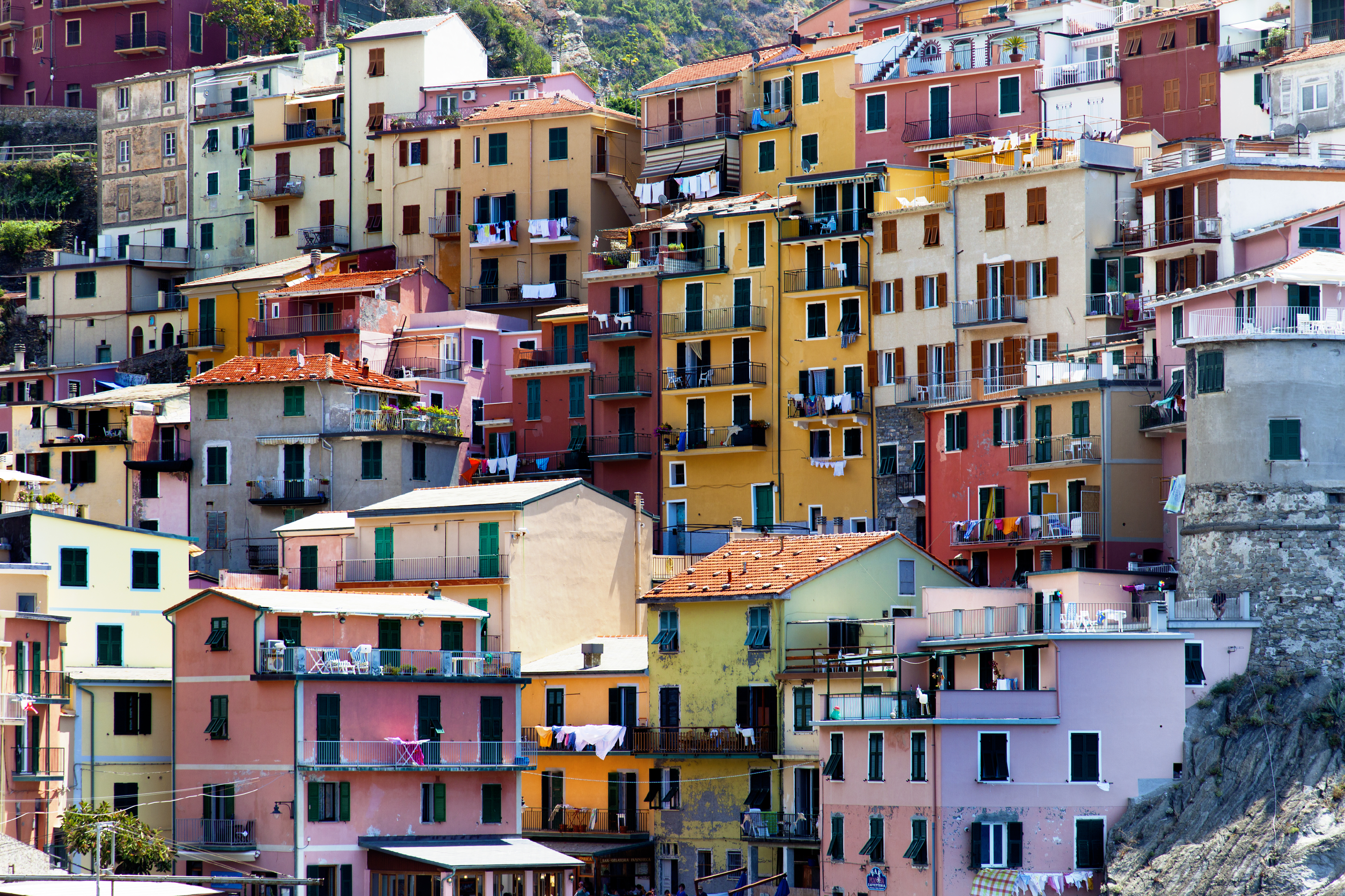 Ok, so this is one of Italy's biggest tourism magnets - but with good reason. Manarola is the oldest of the five medieval fishing villages in the Cinque Terre on the Liguarian coast. The brightly coloured village is built on cliffs and surrounded by steep terraces that overlook the azure Mediterranean. 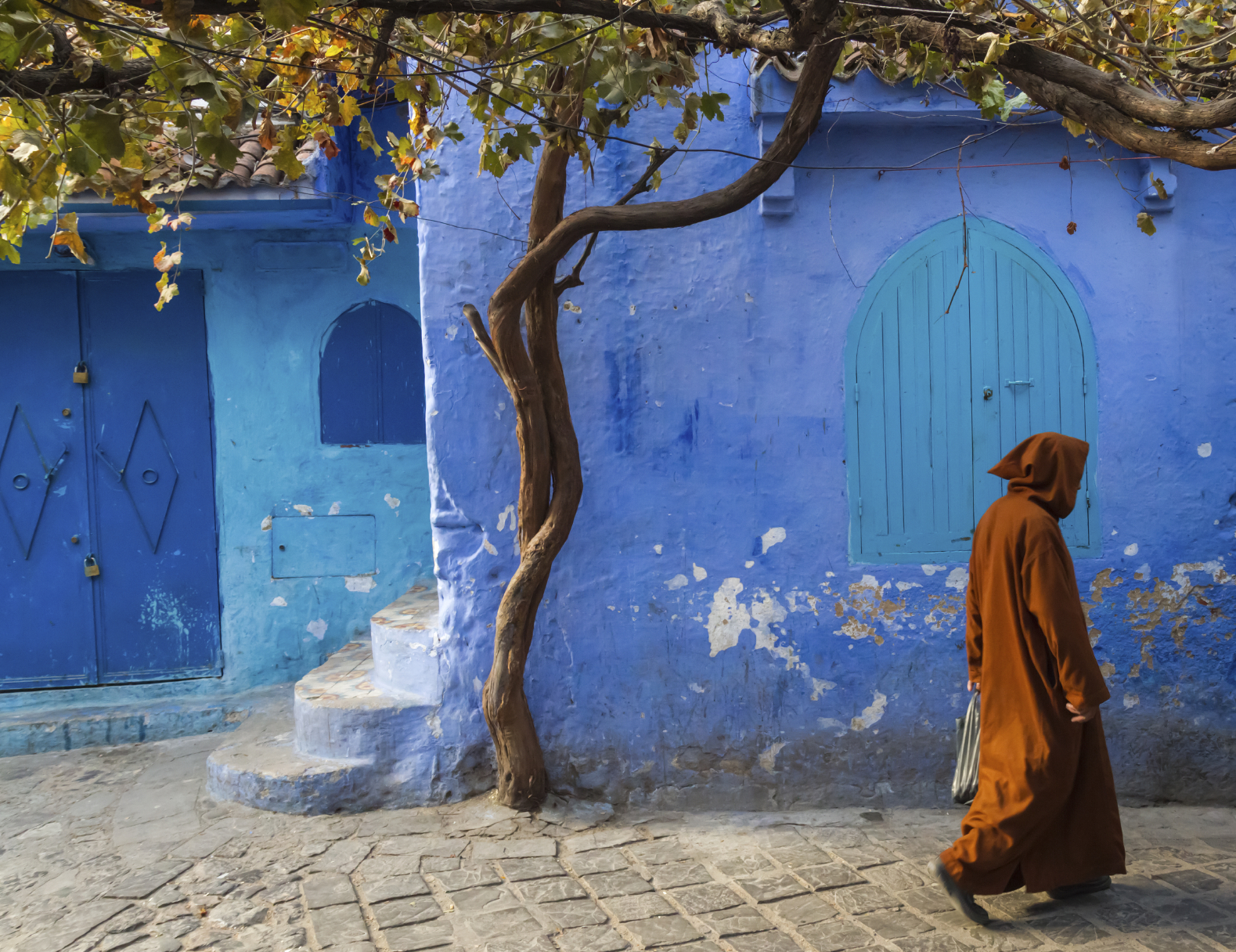 High in the Rif Mountains in Morocco's Berber country lies an azure haven. Nicknamed The Blue Pearl, the small town of Chefchaouen is famous for its astounding turquoise, labyrinthine medina.
Just like Balat (below), Chefchaouen was a refuge for Jews escaping the Spanish Inquisition. To keep their houses cool and ward off insects, the residents began painting the lower half of their buildings blue (by far the prettiest solution to air conditioners and insecticide we've heard of). Today the mountain city is a wonderful palette of blue buildings offering stunning valley views. 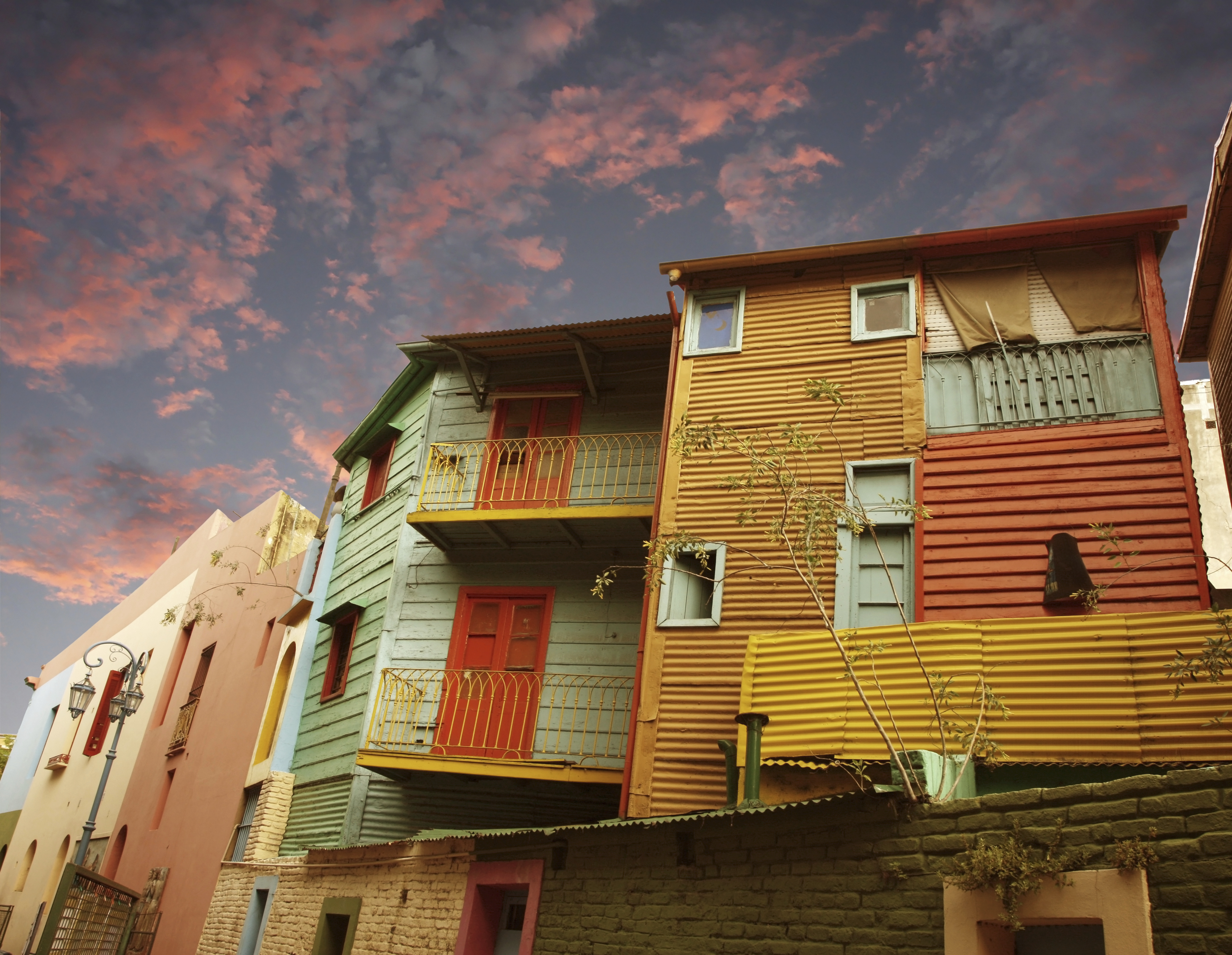 One of Argentina's oldest working-class neighbourhood of Buenos Aires is famed for its sensual tango, its frenzied football club Boca Juniors, and its many colours.

Situated at the mouth of the river Riachuelo, the neighbourhood used to house several shipyards which provided scrap materials such as planks, metal and paint, all of which was used as building materials for the colourful tin-roofed houses. Sheds lean against each other in a kaleidoscope of pinks, yellows and blue pastels, and despite the hordes of tourists, La Boca remains a working class neighbourhood.

Legend has it that when choosing their team colours, Boca Juniors decided to use those of the next ship that rolled into La Boca port. That ship happened to be Swedish, resulting in the team adopting yellow and blue as their new team colours. 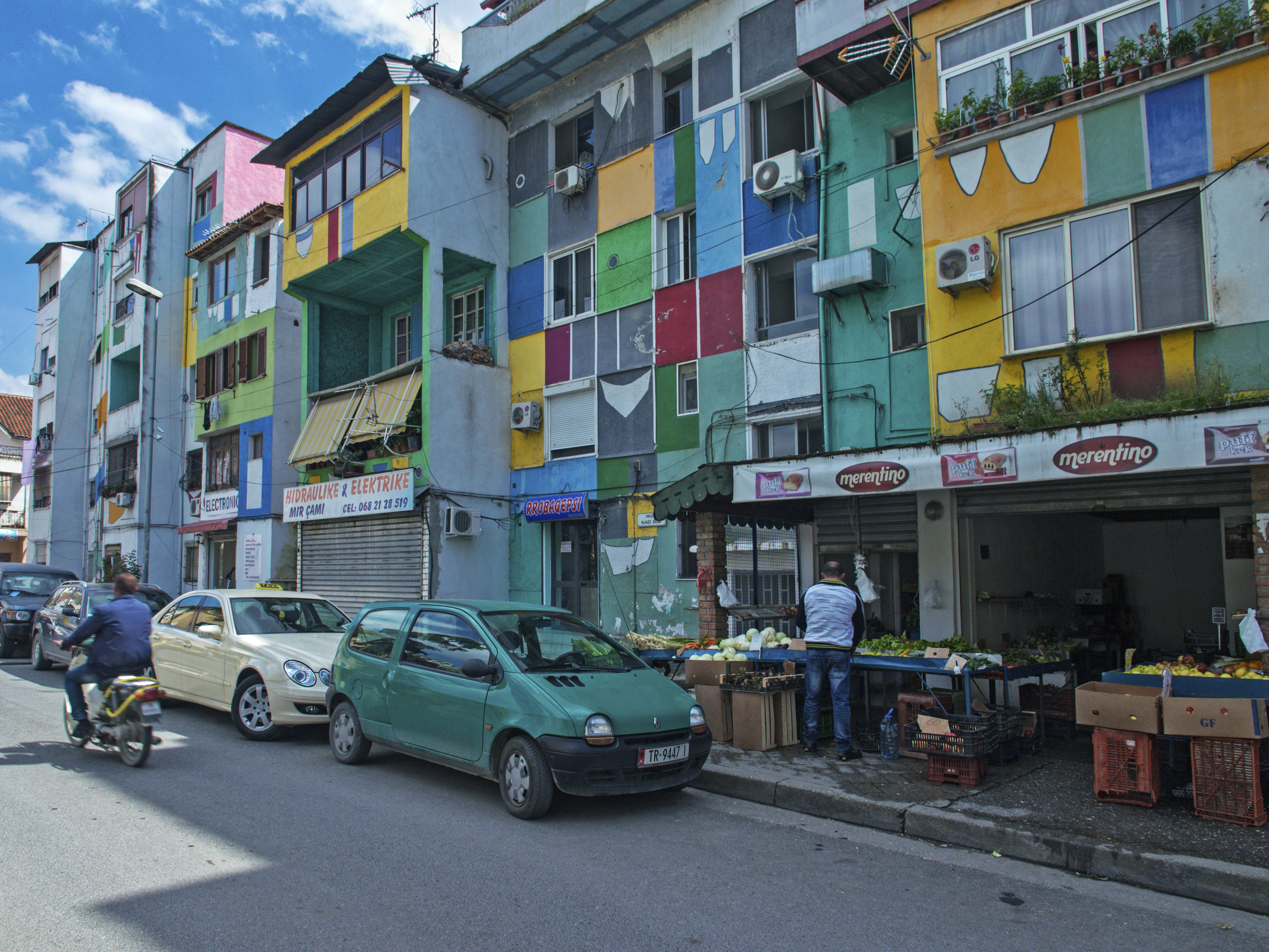 What do you do if you become the mayor of a city full of grey concrete buildings from the communist era? One solution is to give the city a colourful makeover. That's exactly what Tirana's then mayor, Edi Rama. did in 2000, as part of his Clean and Green project (he's now Prime Minister of Albania).

Today there are several buildings in what has come to be known as 'Edi Rama colours' (bright pink, yellow, green and violet), scattered across the Albanian capital. 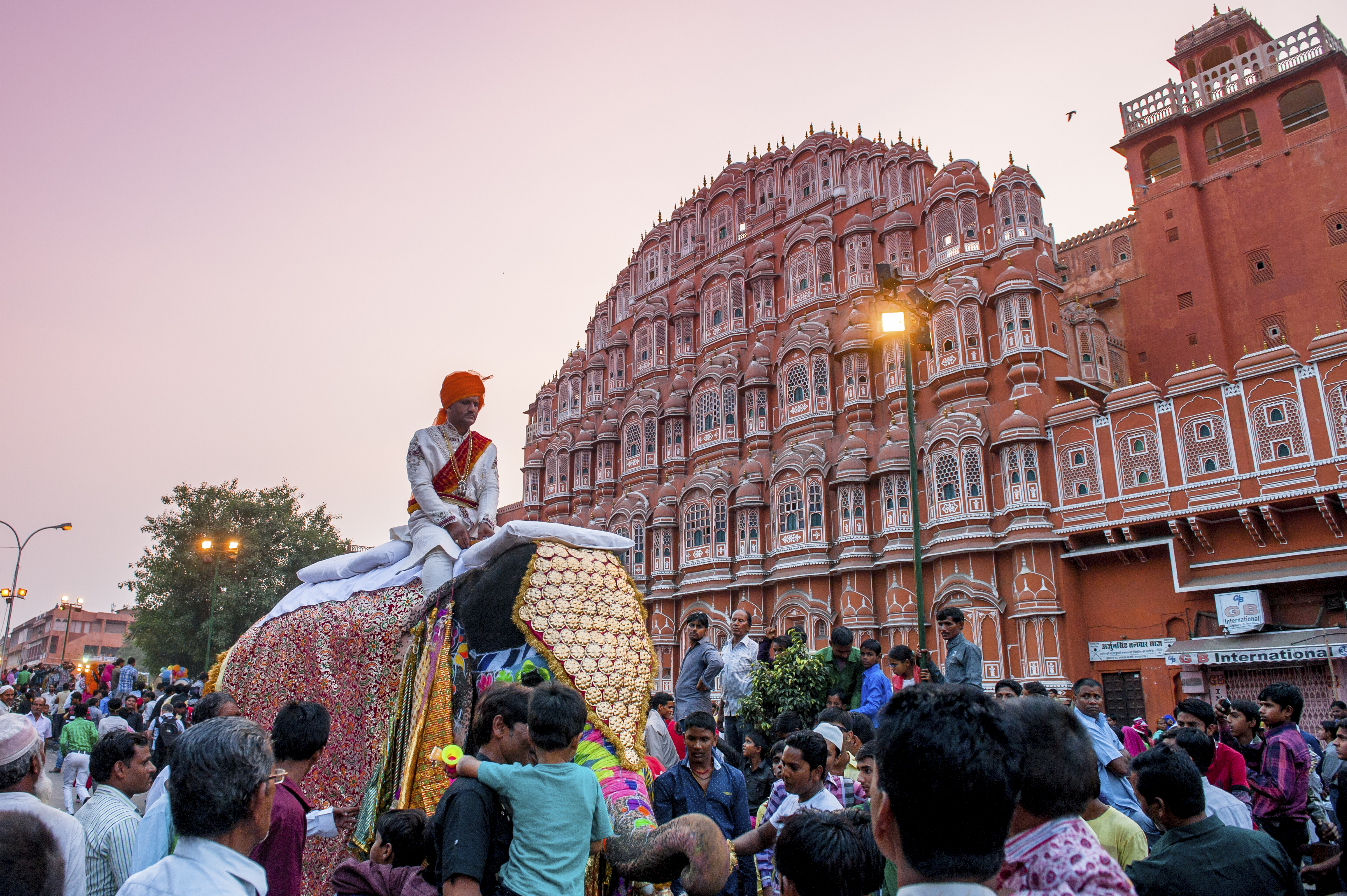 In 1876, the ruler of Jaipur ordered the city be painted pink to welcome the arrival of Edward, Prince of Wales. To this day, residents in the Old Town are lawfully prohibited from painting over any of the neighbourhood's pink buildings, meaning that nearly 150 years later, the Rajasthani capital's traditionally rosy hue is still sparkling. 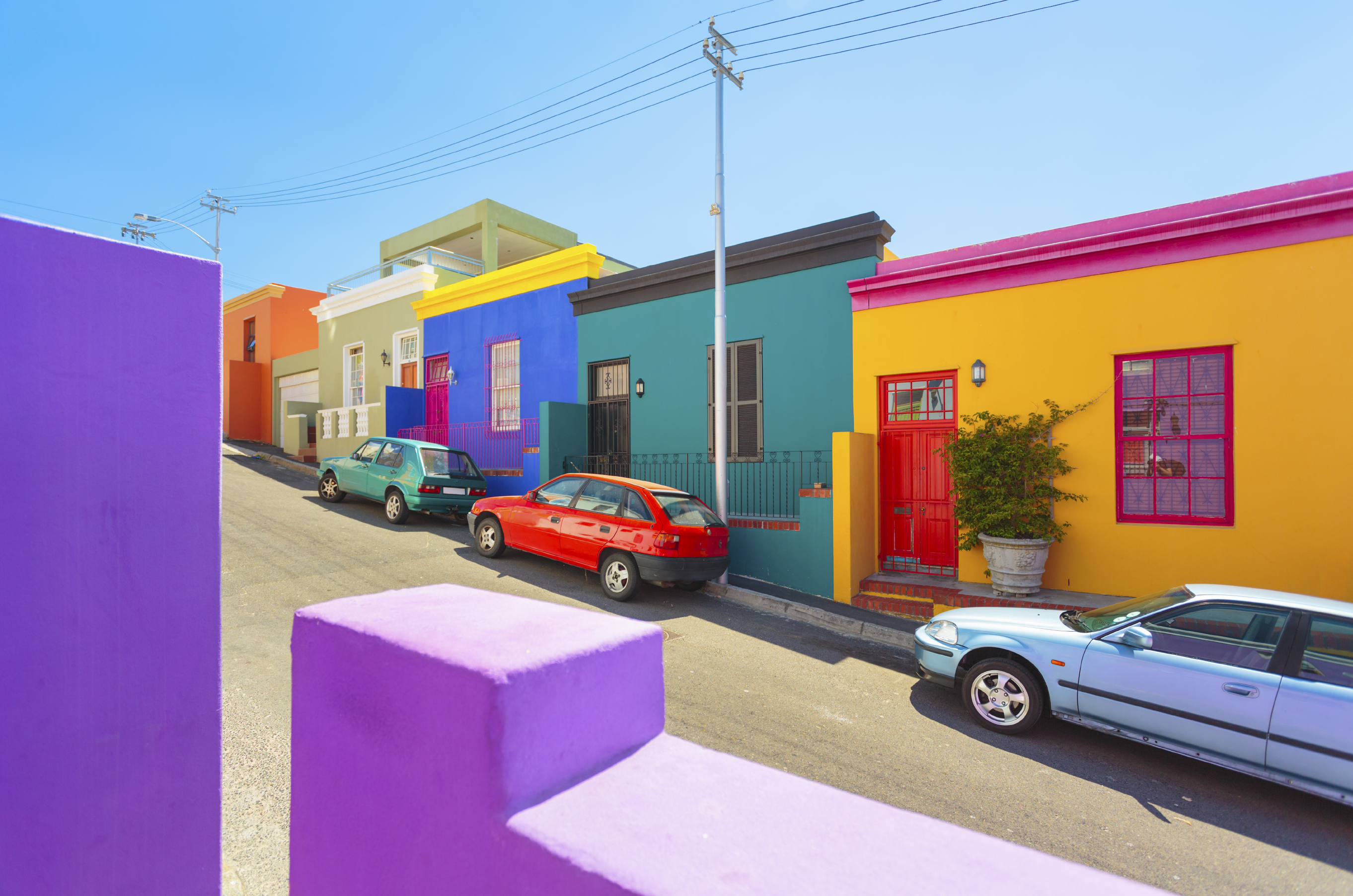 As one of the most ethnically diverse cities south of the equator, Cape Town hosts a hotchpotch of cultures, traditional architectural styles and all the splashes of colour that come with it. These wonderful contradictions are none more clear than in the radiant neighbourhood of Bo-Kaap.
The residential area is home to Cape Town's Muslim community, who play house in some of the city's finest examples of nineteenth-century Dutch and Georgian terraces. Residents began painting their homes in inviting pastoral hues to celebrate the end of apartheid. Today, property in Bo-Kaap is in high demand and it's not hard to understand why. 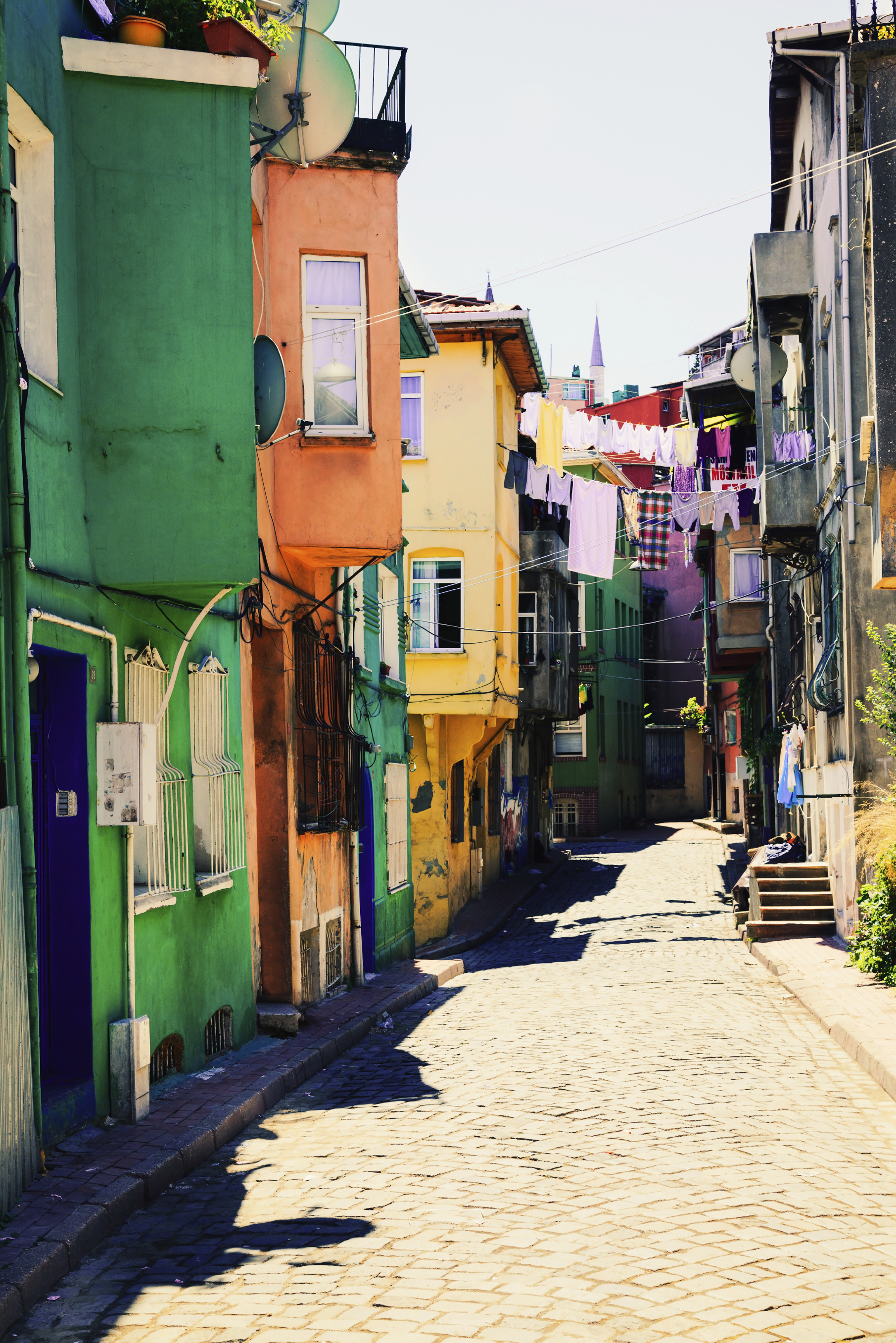 Known as Istanbul's old Jewish quarter, Balat offers a kaleidoscope of colours. Tucked away on the shores of the Golden Horn, the Jews here after their expulsion from Spain in the 15th century. Over the centuries, the area attracted a wide variety of residents, and is today one of Istanbul's most atmospheric neighbourhoods.

With a wonderfully rich history comes colours aplenty - and in recent years, the century-old Ottoman houses of red, blues and greens have been brought back to their former shining glory. In the wake of the facelift, Balat has become one of the coolest places for a summer stroll, with several chic cafés, boutiques and art galleries popping up on its winding street corners.

Want to see more? Check out our slideshow below.

The world's most colourful neighbourhoods
Colorful buildings in the Malay Quarter of Cape Town Central.
Up Next


Oh, and don't miss the world's most colourful beaches...

The world's most colourful neighbourhoods
Harbour Island is where you will find the Bahamas' most famous pink beach which stretches three miles along the eastern coast. Pinks Sands Beach is protected by a coral reef and its sand is a composition of tiny microscopic animals known as Foraminifera, which grow bright red shells that wash ashore and mix with the white sand to create a pink hue.
The Caribbean island of Barbuda is also home to pink sand beaches, with its most famous Pink Sand Beach, often deserted. The beach boasts silky sand over eight miles, from Spanish Point to Palmetto Point. Its champagne colour glows rose thanks to the crushed coral in the sand. The water is clear and fantastic for snorkelling.
There are many interesting beaches in Hawaii but Big Island's Papakolea Beach is arguably the most unusual of them all. The green sand stretch, located near the southern tip of the island, owes its olive hue to a semi-precious gem called olivine. The ocean erodes the stones, crushing them into the fine sand.
Red Beach in Santorini is one of the most famous spots on the Greek island and is the definition of a volcanic beach. It is named after its rich red hue and backed by cliffs of the same colour. The beach is located just steps away from the ancient site of Akrotiri and can get quite crowded in the summer due to its small size.
Another red sand beach is Kaihalulu, a pocket beach on the island of Maui. Its sand is deep red-black, contrasting with the blue water, black sea wall and green ironwood trees.  The colour comes from the cinder cone hill on the northern end of the cove and makes for a very unique sight on the Hawaiian island.
The black sand at Maori Bay in New Zealand's North Island is caused by the iron content derived from the ancient volcanoes of the area, including the large Kaipara Volcano, which erupted millions of years ago. The 37-mile stretch is popular among surfers but even greater an attraction than its dark sand is the Gannet Colony, and the birds' busy goings on between August and March every year.
More dramatic in colour than Muriwai is the black sand Punaluʻu Beach on Hawaii's Big Island, which is made of basalt and created by lava flowing into the ocean which explodes as it reaches the ocean and cools. The beach can be dangerous for swimming but it’s frequented by endangered Hawksbill and Green turtles, which are often seen basking on the black sand.
The multi-coloured Glass Beach in Fort Bragg is covered in sea glass created from years of residents dumping rubbish into the area of coastline. Every year, a Glass Festival is held but the glass is slowly diminishing due to tourists collecting it on their visits. There are currently plans to replenish the beach with discarded glass.
Australia's Hyams Beach holds the Guinness World Record for having the whitest sand. Many pictures of the beach show it looking so powder white that it is almost blinding. The beach is located on the southern shores of Jervis Bay and is surrounded by Jervis Bay Marine Park and Booderee National Park.
The brilliant white sand at Siesta Beach in Florida earned it the number one spot in America's best beaches list. At the Great International White Sand Beach Challenge in 1987, Siesta Beach was recognised as having the 'whitest and finest sand in the world.' While many other beaches are made mostly of pulverised coral, Siesta's sand is 99 per cent quartz and is so reflective that it feels cool, even on its hottest days.
Famed for its occasional purple sand, Pfeiffer State Beach's unusual hue comes from manganese garnet deposits found in the surrounding hills which erode and wash down to the beach. Not all the sand on the beach is purple and can be found in patches along the northern part, most often after a storm.
Ramla l-Hamra means 'Red Beach' in Maltese but the sand here resembles more of an orange hue and is surrounded by rocks with golden limestone and volcanic ash, which when combined give this interesting shade. The sandy strip in Gozo is popular with snorkelers, families and locals.
Chocolate-coloured Rockaway Beach, in Pacifica, owes its unusual colour to blue-grey limestone mixing with volcanic greenstone. Erosion has decreased the size of the beach but it remains popular with visitors to its restaurant and shopping venues. The beach is known as one of the cleanest in the San Francisco Bay Area.
Some say Sardinia's Porto Ferro is an orange beach but we think its mile-long sands are a gorgeous gold, made up of native orange limestone, crushed shells and other volcanic deposits. Backed by large ochre-coloured sand dunes, the beach is located near the Baratz Lake, the only natural lake in Sardinia.
Made up of around 74 different hues, Rainbow Beach is possibly the most colourful beach in the world. It is just over half a mile long and much of the sand colours stem from a rich content of minerals, including rutile, ilmenite, zircon and monazite. According to an ancient Aboriginal legend, the sands became colourful when rainbow spirit Yiningie lost a battle over a beautiful woman and fell onto the cliffs.
Grey sand beach Shelter Cove is a remote stretch that was created by years of erosion of the nearby cliffs. The large beach with offshore reefs, just north of the town of Shelter Cove, is popular with hikers and visitors who come to explore the rugged terrain.
Most visitors to the Maldives don't expect the sandy beaches to be anything but white, but Vaadhoo Island on the Raa Atoll is home to a natural phenomenon which turns the beaches electric blue. The bio-luminescence happens when microscopic organisms react with oxygen in the water to produce light.
Up Next