Rubberneckers could be prosecuted for photographing lorry crash 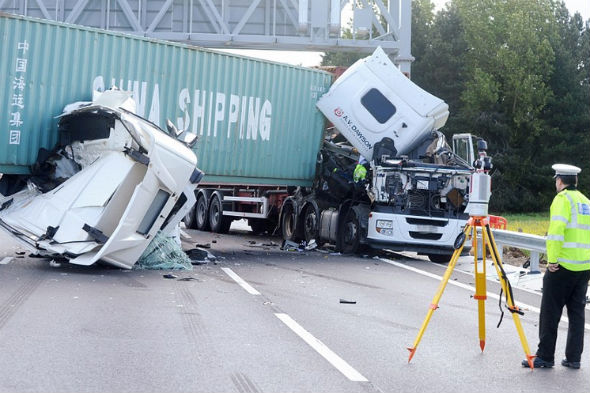 More than 20 people are set to be prosecuted after taking pictures of a lorry crash on the A14 near Cambridge whilst behind the wheel, local police claim.
The drivers stopped by the police used their mobile phones to take pictures and record the footage of the crash that involved four lorries and left two cabs demolished.

Police informed the drivers in question that they would be sent letters in the coming weeks and will potentially face charges of careless driving which could land them a maximum £5,000 fine and nine points on their licence, the Daily Mail reports.

A Cambridgeshire police spokesman told the newspaper: "Using a mobile phone at the wheel is one of the 'fatal four' driving offences, along with speeding, not wearing a seat belt and drink or drug driving.

"Your reaction times are 50 per cent slower and you are four times more likely to have a collision."

With the emergency services at the scene, the road was closed for seven hours as one of the drivers was cut out of his cabin with minor injuries. One other driver also required hospital treatment after the serious crash.

A motorist who was caught up in the resulting jam told the Daily Mail: "'I was stuck in traffic for more than an hour and, when I approached the scene of the crash, it became obvious some of that was caused by people slowing down to take a look."