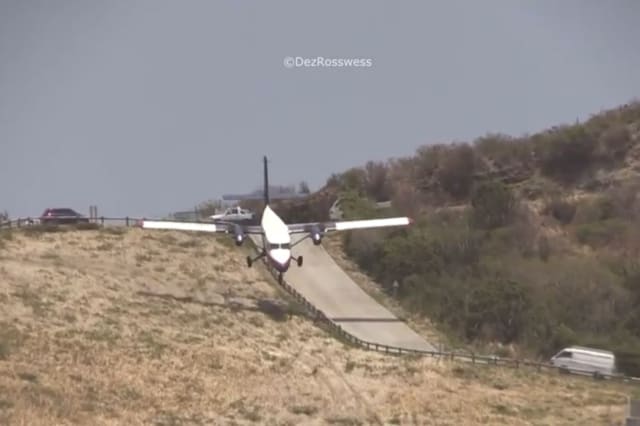 Most of us have been unlucky enough to experience some rocky turbulence, irritating co-passengers or dodgy airline food but this video shows just how scary plane landings can be.

The slow motion footage, captured by YouTube contributor Dez Rosswess, shows a Twin Otter aircraft coming in to land at Gustaf III Airport on the Caribbean island of St Barths.

The unfortunate position of the runway means that the plane has to navigate the brow of a steep hill before coming in to land safely.

Thanks to the awkward positioning of the runway, pilots are forced to approach nose down, rather than the usual position where the nose is facing upwards.

The landing strip at the airport is also just 650 metres long or 2132 feet whereas a regular runway will usually measure around 6,000 feet.

The longest runway in the world is thought to be found at Qamdo Bamda Airport in Tibet, China where is measures a whopping 18,045 feet.

The shortest commercial runway in the world is at Juancho E. Yrausquin Airport on the Caribbean island of Saba and it measures just 1,299 feet.

Video captures plane's terrifying descent into St Barths Airport
"Flying in to see such a great landmark like Table Mountain as well as the beautiful city of Cape Town makes this airport approach truly one-of-a-kind."
"The cockpit windows frame the perfect shot of the world's financial hub, appreciated by many, but adored only by pilots. Come rain or shine, the city pulses beneath you during every landing."
Judge Ana Silva O'Reilly "Not for those with faint hears. Landing at ‘The Rock’ requires a lot of skill (and adverse weather conditions redirect flights to Malaga too often), but if you are lucky it is stunning. Also very interesting to see the geographic differences between nearby Spain and this British territory."
Forbes judge Adam Twidell says: "Arrival into this airport brings you between the skyscrapers of an international city and lush Canadian Parkland. Both framed by the Great Lakes in a fantastic juxtaposition between earth and human creation. "
Judge David Scowsill says: "A simply unforgettable and thrilling landing on the world's shortest runway, flanked by cliffs and ocean with a striking view of its active Volcano, Mount Scenery."
"Nowhere in the world can you get so close to a plane landing - it is as if you could jump high enough and touch it. It's an awesome view, both as a passenger on the plane and as person sitting on the beach below."
"As you cross the water from the mainland you eventually see the hills of the Isle of Barra and surrounding islands in the distance. As you draw closer you are totally enchanted by the contrast of greenery, rugged shorelines, the shimmering waters and the spectacular white sands which you eventually land on (when the tide is out). Totally and utterly amazing."
Judge Tiffany Dowd says: "This has to be one of the most spectacular places to arrive and depart with this breathtaking coastline as far as the eye can see."
Judge Doug Gollan says:  "Arriving at night makes the Las Vegas strip look like some type of miniature recreation. It is always worth a window seat."
Forbes judge Bill Prince says: "A world-class approach to a world class destination. The snatched panoramas as you descend into this hitherto barren-looking landscape makes you realise that pilots do get the best views."
Up Next

Pilots struggle to land at 'Europe's most dangerous airport'