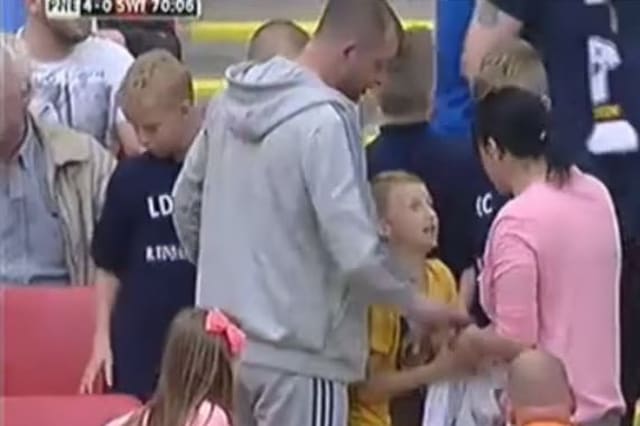 Preston's Jermaine Beckford threw his shirt to a group of young fans on Sunday, and a woman in the crowd swooped in and took it. It later appeared as if she was trying to make money by selling the shirt on, but her efforts have backfired terribly.

Beckford helped secure his side's promotion to the Championship at Wembley on Sunday, with an impressive hat trick - leading them to a 4-0 victory over Swindon. As he left the pitch, he made it an even more special day for one group of fans, by taking his shirt off and throwing it to a group of them. It was caught by eight-year-old Ted Dockray from Failsworth in Greater Manchester.

However, after some fairly undignified arguing and grabbing, the shirt was taken by a woman in a pink top.

Footage of the incident was shared across social media, and the reaction was damning and overwhelming. Soon afterwards a Facebook page was set up dedicated to tracking the shirt down and returning it to Dockray. Beckford also spoke out, urging the woman to return the shirt.

Then things started to look even worse. At the time it was assumed that the woman had secured the shirt for her daughter - who was sitting next to her. However, the Metro reported that later that evening, a shirt was advertised on Gumtree for £1,500 - with the seller claiming it was the same one. It's not known whether the advert was genuine, and it was taken down shortly afterwards. 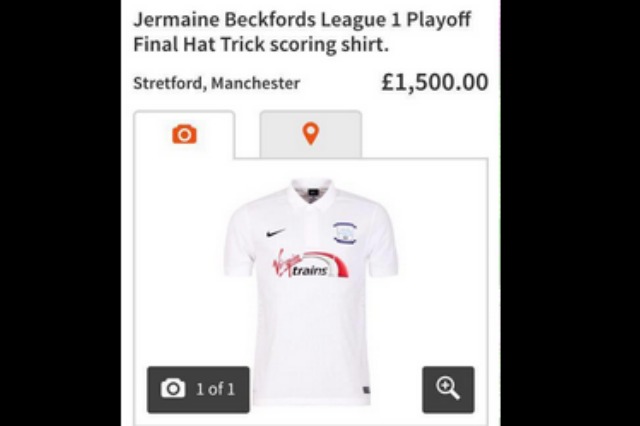 The good news for Dockray was that on Tuesday, Beckford announced that he would meet the lad in person and give him a replacement. Even Olympic long jumper Greg Rutherford wrote on Twitter that he'd like to send him one of his signed vests to cheer him up.

However, the bad news for the woman in question is that on a dull bank holiday, the story and the footage were repeated across media and social media, and the reaction got louder and nastier.

Much of the criticism of the woman has become aggressive, and she has now deleted her Facebook account to avoid the worst of it. The Daily Mail reported that she was adamant that the whole thing had been a horrible misunderstanding, that she knows the Dockray family, and will sort it out between themselves. She added that everything that had been written about the story was "wrong and twisted."

According to the Mirror, Dockray's family have now asked fans to calm down, adding: "My family would never want any trouble for the woman over a football shirt." And: "I'm sure it will be a happy ending for everyone involved."

Clearly it seems as though everyone was caught up in the moment. It's not the first time this has happened. In 2012 a couple from Texas were carried away with the chance to win a souvenir ball at a baseball match. They focused all their attention on the ball, and managed to catch it. Unfortunately, it meant they didn't spot the three-year-old boy nearby who had hoped to make the catch, and burst into tears. Their celebrations and his crying were caught on camera and they became viral villains - attracting incredible levels of vitriol for an incident they had no idea had affected anyone but themselves.

As for whether or not the shirt was advertised for sale, it's worth stressing again that it's not known whether the advert selling the shirt was genuine. It's also worth highlighting that £1,500 would have been a hugely ambitious price for the shirt. At the moment on eBay, there are plenty of signed photos of Beckford on sale for £3, and one up for auction that ends this evening with no minimum bid - which at the time of writing hadn't attracted any bids at all.

In terms of match-worn shirts, even an international superstar like Messi has a match-worn signed shirt up for sale on eBay for £400 at the moment - without any bids. There's also a single lot selling three MK Dons match worn shirts by Daniel Powel, which at the moment has fetched a single bid of £30 - and has 2 days left to run.

There's every chance one woman's life is being made a misery over a split-second decision about a shirt worth less than £50.