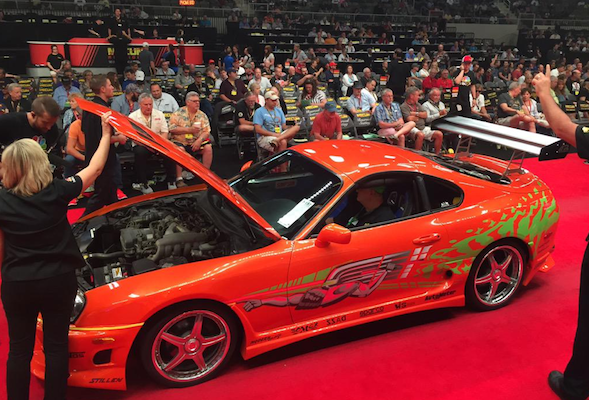 The original, bright orange Toyota Supra that was driven by Paul Walker's character in the 2001 film 'The Fast and The Furious' has sold for $185,000 (£120,000) at an auction last week in Indianapolis.
The 1993 model, which was one of a number of MkIV Supras built for the movie by Eddie Paul at The Shark Shop in El Segundo, California, was estimated to sell for between $150,000 and $200,000 due to its illustrious history.

However, the new owner is unlikely to be able to emulate any of the high speed scenes seen in the film due to the fact that the model is actually a standard, non-turbo version, with its 3.0-litre straight-six engine mustering just 230bhp.

It does come fitted with a number of stunt additions, though, including a full roll cage, heavy duty suspension, a set of competition seats and a strengthened fuel tank.

The exterior of the car is decorated with a Bomex bodykit, huge APR wing, aftermarket alloy wheels, Yokohama tyres and the now famous body graphics which were added by San Diego's Modern Image, so it at least looks the part. The interior features a custom steering wheel with obligatory Nitrous Oxide injection buttons.

The car was one of 58 used during the making of the film, which catapulted the Supra as well as the young Walker into the limelight.

It featured in key scenes throughout the movie, specifically in the final race between Walker's character Brian O'Connor and Vin Diesel's Dominic Toretto(driving a 1970 Dodge Charger), in which Walker jumped the car over a railroad crossing.