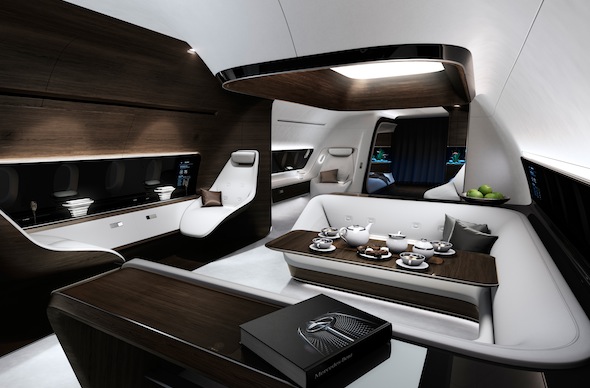 Mercedes-Benz has teamed up with German airline Lufthansa to present its vision of the ultimate in luxury airplane cabins.
Designed for medium and long-haul aircraft – though don't expect to see it on your next Easyjet slog – Mercedes claims it has taken a completely different approach to designing aircraft interiors.

Most obviously, the sleek design does away with the traditional separation of an aircraft's ceiling, walls and floor, and instead replaces it with panels that flow into one another, aiding the creation of independent spaces within the limited cabin area.

"It was an inspiring challenge to transfer our design philosophy of sensual purity into the area of aeronautical engineering," said Daimler vice president Gorden Wagener.

"The spectacular architecture of the interior shows creativity and modernity. Sensual surfaces and clear forms, combined with intelligent high-tech features and perfectly shaped modern luxury are the characteristic features of Mercedes-Benz design."


The sleek furniture and its neat integration with surrounding wood and metal trim is inspired by Mercedes' upmarket S-Class saloon, to create an atmosphere that resembles a luxury hotel lounge rather than an airplane cabin, with a focus on space and opulence rather than maximum seating capacity.

Further touches inspired by the brand's flagship limousine include concealed black-panel windows, which can be made transparent or opaque at the touch of a button. These panels can also be used to integrate screens for passenger entertainment.

While the interior concept remains a design study for now, Mercedes has announced that it will continue to work with Lufthansa to determine the level of customer interest from the VIP aviation market.
Tags
Read Full Story Click here to comment