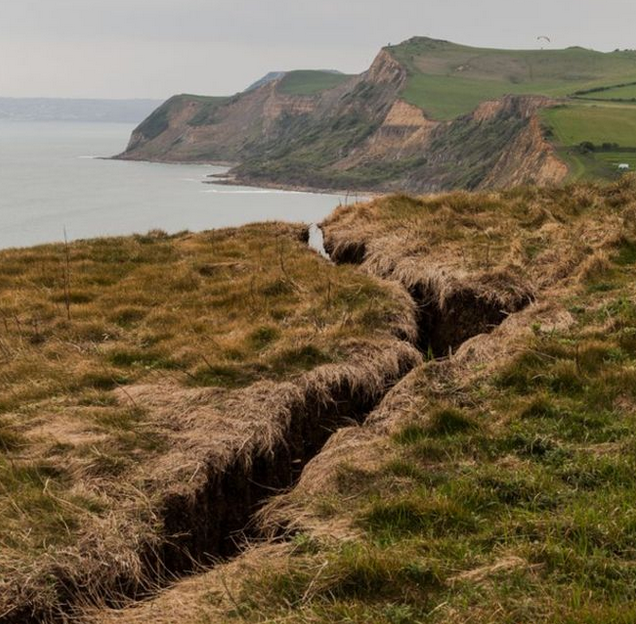 A large crack on Jurassic Coast cliffs in Dorset has the potential for a chunk to fall off onto the beach below, experts warn.

The crack is around 2ft wide and 45 metres long, and is located at the edge of Watton Cliff near West Bay, reports the Mirror.

Photographer Doug Chalk came across it and snapped some pictures.

Speaking to the BBC, Richard Edmunds, Jurassic Coast earth science manager, said: "It's clearly going to fall off - I just can't tell you when.

"It's quite concerning but it's part of the nature of this coastline."

Dorset County Council said it was installing temporary warning signs, but that the crack was above the western part of Eype Beach and there was no threat to West Bay's esplanade.

A spokesman said: "Advice to coast users is, as always, for people to stay away from the edges and base of cliffs, to observe warning signs, whether temporary or permanent, to stay on official paths, and to be aware of their surroundings."

Doug uploaded the picture to Facebook to warn other people out and about over the Bank Holiday weekend.

He said the post had been widely shared, and added: "It's going to be a major fall when it goes."

York Minster is one of the largest cathedrals of its kind in Europe and was built in 1338. The Gothic building is the seat of the Archbishop of York and is known for its striking architecture and the great east window.

With a history that dates back almost 1000 years, it's not surprising that Windsor Castle is the oldest occupied castle in the world as well as being the official residence of the Queen of England.
Buckingham Palace is the official workplace of the royal family and the London residence of the Queen. It was originally built as a large townhouse in 1703. It was bought by King George III and then enlarged in the 19th Century.
Tower Bridge is one of the most iconic sights in London and can be found bridging the Thames alongside the Tower of London. The bridge also recently unveiled a glass floor walkway 42 metres above the river granting visitors a spectacular view.
Westminster Abbey is one of the most well known religious buildings in the whole of the UK and has hosted a number of Royal weddings, coronations and burials.

Parliament is open to all visitors from the UK and oversees and everyone is welcome to attend the debates and watch the committee hearings that take place there.

Big Ben is generally regarded as the name given to the entire clocktower although it was originally the name attributed just to the bell. The tower was completed in 1859 and rises to nearly 100 metres, making it one of the most well-known buildings on the London skyline.

Britannia was first launched from a shipyard in Clydebank in April 1953 and served the Royal Family for over 44 years and travelled more than a million miles. The yacht is now berthed at Leith, Edinburgh and open for visitors to enjoy.
The iconic Edinburgh Castle overlooks the Scottish capital from its rocky plinth high above Edinburgh and has been home to many Scottish monarchs over the years including Mary Queen of Scots. while visiting the castle you'll have the chance to explore the National War museum, Scottish crown jewels and much more.
This historic Tower of London can be found on the bank of the Thames and although monarchs no longer live in the palace, the crown jewels are housed here and therefore the tower remains a significant part of London and the royal family.
Up Next