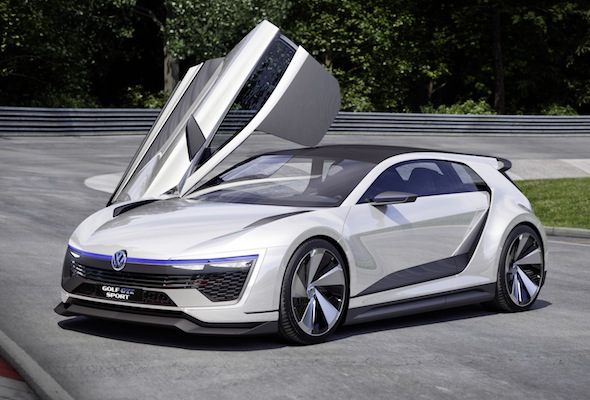 The annual Volkswagen fan meet on the shores of Lake Worthersee in Austria normally sees the German brand show off an outrageous concept car. This year was no exception, with the unveiling of the Golf GTE Sport.
This futuristic plug-in hybrid concept uses a turbocharged 1.6-litre petrol engine, lifted from VW's Polo World Rally Championship machine. Combined with two electric motors, its total output is a Porsche 911-beating 395bhp.

This muscular hybrid system is mated to a six-speed DSG twin-clutch gearbox, allowing it to cover the 0-62mph sprint in 4.3 seconds, and get up to a top speed of 174mph.

However, like most plug-in models, the GTE Sport boasts environmental credentials at odds with its performance potential. VW claims combined fuel economy of 141.2mpg; aided by the car's ability to travel up to 31 miles using its lithium-ion battery pack alone.

To keep weight down, the GTE features carbon fibre bodywork, while the gullwing doors are similar to those of VW's eco wonder-car, the XL1.

Inside, the cabin is as futuristic as you'd expect from a forward-looking concept, with an F1-style quartic steering wheel, a digital dashboard and aggressive bucket seats separated by an enormous centre console.

While the model is unlikely to see production in its current form, expect to see elements of its styling filter down to future production Golfs.

The GTE Concept was unveiled alongside a new version of the iconic GTI hatchback. Called the Clubsport, the new model features an increased power output of 261bhp – with an over-boost function offering up to 287bhp for brief periods – and a more aggressive body kit. It is due in showrooms in 2016.