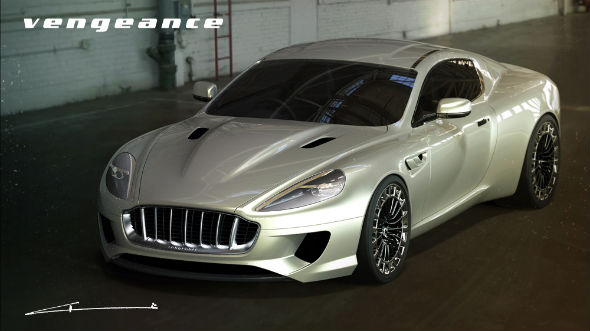 Aston Martin has made a name for itself creating beautiful, exclusive sports cars that put as much emphasis on elegant styling as driving thrills.
Car modifier Kahn, however, is famous for turning standard off-roaders into rapper-spec blingmobiles, with bold paintwork, big wheels and a menacing stance.

So what do you get when you combine the two? The Aston Martin DB9-based Kahn Vengeance is the answer.

This Aston-Kahn lovechild is identical to the standard DB9 under the skin, with the Aston's musical 6.0-litre 510bhp V12 powerplant stuffed under the long bonnet and mated to the same flappy-paddle gearbox and rear-wheel drive mechanical gubbins.

The coach-built body, however, is completely different, adding menace to the standard car's sleek lines in the first set of official images to appear from Kahn.

Where the DB9 boasts smooth curves and 21st century grace, the Vengeance looks altogether more angry, with its more bulgy bonnet, toothy grille and scowling 'face' and its overall shape taking inspiration from 1980s and 1990s Aston Martins. The rear has also been redesigned with wider flared wings and new taillights.

One very modern feature, however, is the oversized 20-inch front alloy wheels and 21-inch rear alloys – which unusually have been modelled on a roulette wheel – in what could be a homage to James Bond, a man with a penchant for Aston Martins.

With Kahn focusing on changing the look of the DB9 rather than its mechanicals, expect the Vengeance to share the standard DB9's performance figures – with it expected to take a scant 4.6 seconds to sprint to 62mph and being able to hit a top speed of 183mph.

While the standard car weighs in at a not insubstantial £133,000, you can wager that the Vengeance will cost you a substantial amount more than that.