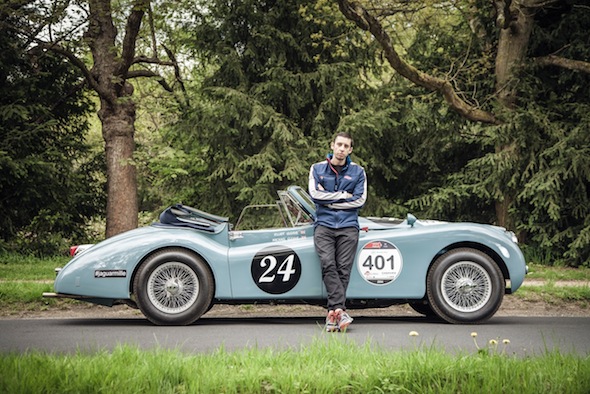 Next weekend, the annual celebration of the world's most iconic road race kicks off in Brescia, Italy, with the start of the 2015 Mille Miglia.
Despite the race officially ending in 1957, each year classic car aficionados descend on the small Italian town to take part in a parade in homage to what was one of the most legendary races in the history of motorsport.

With only cars built prior to 1957 eligible to take part, the event is a chance for car manufacturers to show off their near-priceless competition machines. This year, Jaguar is fielding number of vehicles, and has invited numerous celebrities from the world of fashion, film and music to take part.

We caught up with Elliot Gleave – the British rapper better known by his stage name Example – who's entering the Miglia for the second time, alongside his father, to find out why this drive through the Italian countryside holds such appeal for car fans.

Firstly, how did you get involved with the Mille Miglia and the Jaguar team?

I got introduced to the Jag team through a mutual friend. I was a huge fan of the XJ220 as a kid and I was lucky enough to come on board as a Jag 'representer' when the F-Type launched. They asked me to race in the Mille last year with my wife so it's a pleasure to be back again this year with my old man with me.

What is it about the Miglia that holds such appeal for car fans, particularly nearly 60 years after the official road race ended?

It's like nothing else I've ever experienced. Obviously there is the fact it's a legendary race and you spend four days driving side by side with some of the most beautiful cars in history, but what did it for me was the scenery. When you're driving through castles in Verona and vineyards in Tuscany and there's hundreds of locals shouting and waving at you, it takes your breath away. In some of the villages you drive through, the people hand you their local produce, 10 minutes later you're doing 130mph on a country road with a block of parmesan in your lap and the police by the side of the road encouraging you to drive faster!

You've picked a Jaguar XK140 as your weapon of choice. Why does this particular classic stand out for you? How does it compare to the XK120 you campaigned last year?

I got to test drive it the other week and felt like it had a bit more to it than the 120. It has a bigger engine for starters! It felt slightly more rigid and the clutch was a bit stickier. To be honest I wouldn't fit in a D-Type – not for potentially a 14-hour day of driving anyway.

AOL Cars meets: Example
Up Next


What is it that appeals to you about vintage cars such as this?

The connection to the vehicle is just something you don't get with modern cars. By the end of the race last year I felt so attached to that 120 – it felt like part of me. You feel everything the car is doing and you also feel the road underneath you like you'd never feel it in a modern car.

This is your second year taking part. Are there any standout moments or horror stories from last year's event?

Last year I nearly had a head on collision with a non-race vehicle that was pulling out of a junction and hadn't seen me. I had to slam on the brakes and turn the car sideways to avoid it. As we came to a stop and looked behind us there were tyre marks for 30 metres up the road. I just restarted the car and we were off again. It didn't hit me how close to death we'd come until a few days later.

Any wheel-to-wheel tussles with other drivers?

It's not really like that. It wasn't for me. You can choose to compete with other cars around you but it's such a long race it's kind of pointless. Plus the race isn't necessarily about being the fastest. I tried to keep up with [former F1 driver] Martin Brundle for a few kilometres one day. That didn't last very long

You're competing this year with your father. Do you get on well or is it going to end up in a massive row?

We get on great. He's an amazing driver, too. It will be an amazing bonding experience for us. I feel very lucky to be able to do something like this with him.

Who's the better driver?

We're similar but I'd say my reactions are sharper

Are you handy with a spanner should things go wrong?

We have a support car so no need to worry but no I couldn't save us from a breakdown.

Jaguar recently gave its celebrity driving crew a taste of what to expect, with its own 'Mini Miglia' in the Scottish Highlands. Click play below to see what happened. The 2015 Mille Miglia starts on May 14.

Futuristic elevators travel on the outside of buildings