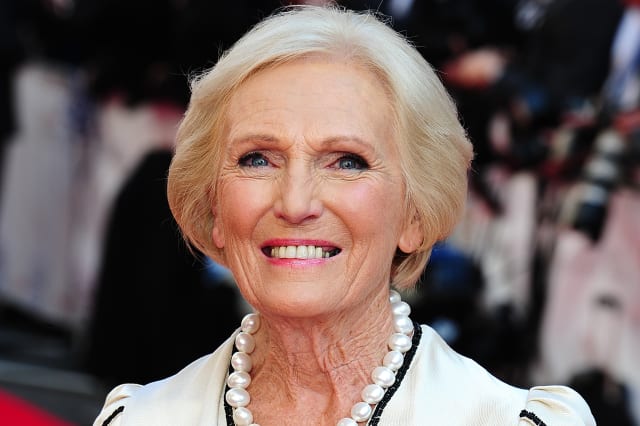 Heston Blumenthal's restaurant has been named one of the world's best - but Mary Berry has admitted that she is not its biggest fan.

The Fat Duck was awarded its third Michelin star in January 2004.

"I don't go to fancy Michelin-starred restaurants often," she said.

"The Waterside Inn in Bray is where we go for celebrations, but somewhere like The Fat Duck (which is also in Bray) wouldn't be my first choice...

"I've only been once but it's for the really strong foodies that want a lot of experimental food. That's not really me," she told the magazine.

Asked about her favourite TV chefs, she added: "I love Michel Roux Jr and James Martin - the chefs who are experts in their own right, like Rick Stein on fish.

"But I don't watch them very much because I don't think it's fair for my husband to be in a total food environment all the time! So we watch programmes about gardening more."

She said of her TV viewing habits: "I used to watch Coronation Street but it was totally different then. I don't really want to watch the stuff that goes on now - the fighting, the drama, the stories about rape, children out of wedlock...

"That may be as life is, but I don't really want to know. I want something a little bit happier on my television, something gentle that's not going to disturb and worry me."

Berry said that she has "always insisted on meals around the table in the kitchen".

She added: "Then they can go and watch the telly. I don't want food all over the place, down the sides of the sofa... When I shared a flat before I got married, we would always eat around the telly, but not now!"

The Five Fields in Chelsea is a modern British restaurant serving some of the UK'S finest seasonal and artisinal produce.

The Green Pea is a family run restaurant, cafe and gallery in Greenwich specialising in quality pub grub.

The Andover Arms in Hammersmith is a traditional British gastro pub tucked away in Brackenbury Village.

The Art of Pizza in Cricklewood serves traditional Neapolitan pizzas cooked in a stone baked oven.

Bombay Chow in Hammersmith offers a selection of Indo Chinese dishes and specialities.

Vozar's is the first cafe and restaurant in London that is fully wheat and gluten free.

The menus at Marianne Restaurant change daily using only the freshest, seasonal ingredients.

The food at the Olde Goa is cooked infront of you in this homely restaurant. The restaurant combines the distinctive laid back culture of Goa with simple,soulful cuisine.

Comedor Grill & Bar is an Argentine restaurant in Islington serving a range of classic and modern South American dishes.

Pop Art Sushi is a contemporary Japanese restaurant that offers a casual dining experience with an eclectic menu of speciality cocktails.

Omnino Steak House is a boutique steak restaurant that specialises in the art of grilling.

Would you pay £75 for a plate of bangers and mash?

Diner charged £250,000 at restaurant in Hampstead

China hospital and Stormzy vest up for design of the year

Futuristic elevators travel on the outside of buildings