Stirling Moss's last racing car to go under the hammer 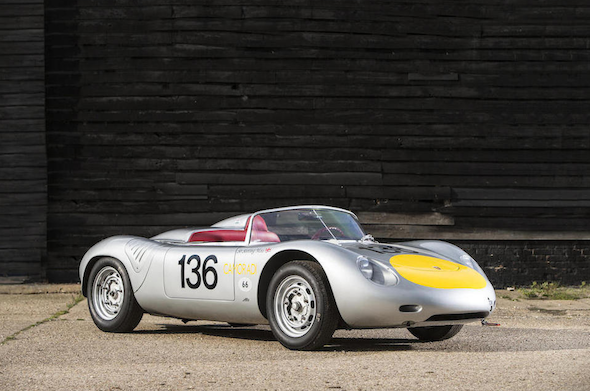 British motor racing legend Sir Stirling Moss is parting with the car he campaigned in his last competitive race.
Set to go under the hammer at Bonhams Auctions' Goodwood Festival of Speed sale, this Porsche 718 RS61 is expected to fetch up to £2 million.

Moss purchased the 1961 model – chassis number 718-070 – back in 2010, saying he "fell in love with it, all over again" when he saw it for sale in America. He subsequently raced it both in the Le Mans Classic and in the USA in his very last competitive motor race.

Sir Stirling's passion for this particular Porsche stemmed from a career racing them. In 1961 he raced alongside Graham Hill in a RS60, and he and Hill then went on to share an RS61 at the Nurburgring 1,000Km race.


Moss described the Porsche RS60/61 series as "just super cars – beautifully balanced and simply tailor-made for such races as the mighty Targa Florio around 440 miles of Sicilian mountain roads. That was one morning when I woke up and really could say to myself, 'For today's race you have got the ideal car...'"

Now heading to auction, this car has a powerful four-cylinder air-cooled engine mounted behind the open two-seat cockpit. It's also shared a glorious racing history, winning the Targa Florio in 1956, 1959 and 1960.

Since Moss purchased the car, it's undergone a thorough rebuild from top historic Porsche specialist Andy Prill, which saw the car re-finished both mechanically and aesthetically to its current race-ready form.
Tags
Read Full Story