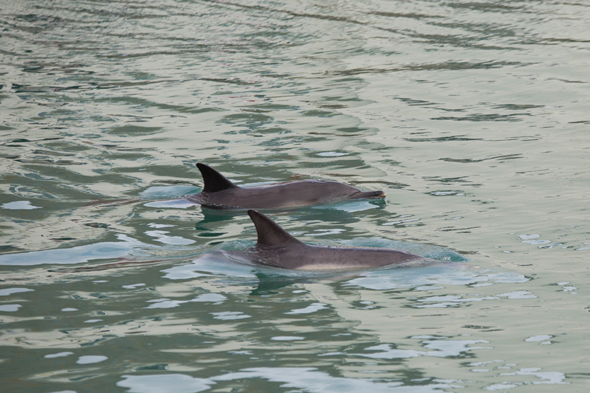 Residents in Weymouth were treated to a visit from two young dolphins on Saturday.

The dolphins were spotted swimming in Weymouth Harbour and were watched by a crowd of people.

One witness told the Dorset Echo: "Seeing the dolphins has made my day.

"I have lived in Weymouth for years and I've never seen them.

"Usually they can be spotted quite a way off shore but to see them this close was very special."

According to the BBC, they were common dolphins, a breed which normally gathers in large groups in deep waters. 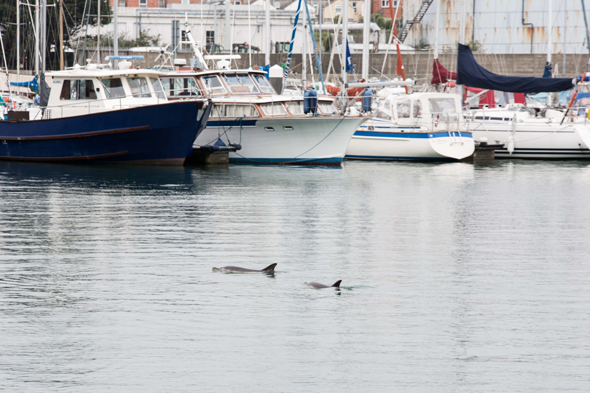 Peter Evans, from the Sea Watch Foundation, said: "Although they are called 'common' they don't normally come into harbours.

"We don't know why individual dolphins come into such inshore areas, often surrounded by boats. Sometimes it is because one is sick or injured and its companion wants to remain close by it."

It is believed the pair has now returned back to the sea. 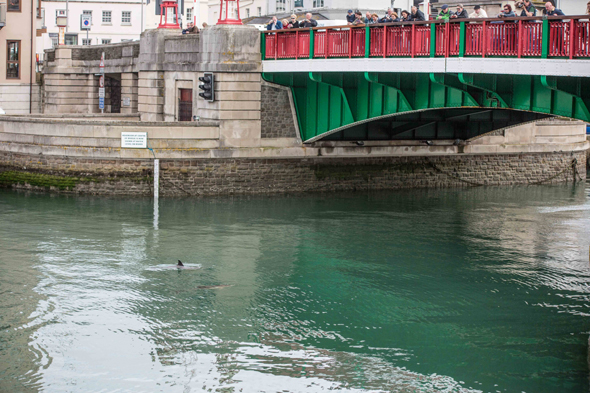 In 2013, tourists in London were left amazed when they spotted a pod of dolphins swimming up the River Thames.

They later added: "The dolphins appear to be taking in the London sights whilst they wait for the tide to turn & then will make a safe return to sea #clever"

Dolphin masters the art of shooting hoops with his nose

This is a lovely marine nature reserve with woodland, maritime grassland, sand, shingle and rocky reef.  Here you'll find a black-backed gull breeding colony, thrift and grey seal. The site of a 12th century Benedictine chapel can be seen at the highest point of the island.  It’s open between Easter and September (weather and tide permitting).  Access to the island is managed for the benefit of wildlife.  An authorised passenger boat makes the 20 minute crossing from East Looe.  Check Cornwall Wildlife Trust’s website for details.

Formed entirely of pebbles and once a true island, Foulney Island is now connected to the mainland by a man-made causeway built in the 19th century.  It’s great for Arctic and little tern breeding colonies, yellow-horned poppy, and thousands of waders in the winter.  Note that around high tide the island may be cut off for several hours.  Access is also restricted to designated paths during the breeding season.  For more information, visit the Cumbria Wildlife Trust website.

With stunning views across Morecambe bay, this shingle island reserve is a fantastic place for bird watching.  In summer you can see nesting gulls, eiders, oystercatchers and ringed plovers.  Burnet moths and grayling butterflies are on the wing and viper's bugloss, yellow horned poppy and sea lavender are in flower. With miles of unspoilt coastline and spectacular views of the Lakeland fells it provides a  unique habitat.  The grey seal has made its home upon the island alongside rare sea birds which nest along the sands.  The noisy and distinctive natterjack toad also inhabits this wildlife-rich haven. For more information visit the Cumbria Wildlife Trust website.

Famous for its red squirrels with bird hides overlooking lakes, reedbed and the large, sheltered lagoon – important for overwintering and summer breeding birds.  It’s great for water vole, sika deer, red squirrel and large flocks of avocet.  Brownsea Island is open every day from mid-March to the beginning of November, with boats from Poole and Sandbanks. Landing fees may apply.

This is a small nature reserve with steep banks to the River Stour on one side and a wet, reedy area to the other on the river's old course.  With its dense vegetation, this little-visited area offers a retreat for water birds.  It’s great for goldfinch, comfrey, reed bunting and heron.  Mill Ham is accessed by a public footpath across fields and over a small bridge to the entrance.  Note the reserve itself is overgrown and without paths.  For more information, visit the Dorset Wildlife Trust website.

Once the site of the Hounslow Gunpowder Mills, this is now a carefully managed mosaic of woodland, scrub and reedbed. Great for kingfisher, water vole and greater spotted woodpecker, the reserve is open at all times, with the visitor centre opening on the first and last Sunday of each month. For more information, visit the London Wildlife Trust website.

This is an undisturbed sanctuary for birds, beetles and two rare molluscs – the two-lipped door snail and the German hairy snail – in the middle of the River Thames.  It is great for kingfisher and heron.  Access: Excellent views of the island from Isleworth waterfront and occasional boat access for work and open days – check London Wildlife Trust’s website for volunteering opportunities.  Grid ref: TQ 167 757

Alongside flower-rich Mabey's Meadow, the willow woodland of Frays Island provides a perfect spot to see the beautiful River Colne.  It’s great for kingfisher, banded demoiselle and orchids in the summer.  Frays Island is next door to Mabey’s Meadow and accessible by footbridge. For more information, visit the London Wildlife Trust website.

An enticing nature trail between two babbling arms of the River Wandle.  Wander through fruit trees and crack willow to a vibrant meadow.  It’s great for black poplar, kingfisher and the speckled wood butterfly.  Wilderness Island is open at all times, with public footpaths throughout.

This rough grassland and shingle beach is connected by Bonners Salting saltmarsh to the Strood causeway.  Here you'll find short-eared owl, golden samphire, oystercatcher and shelduck. The island is open from 1 March – 31 August to Essex Wildlife Trust members only.  The mile-long crossing involves a number of single plank bridges without handrails, which can be slippery.  The path is also flooded at high tide. For more information, visit the Essex Wildlife Trust website.

Completely surrounded by saltmarsh, this reserve of thorn thickets and flower-rich grassland is only linked to the mainland by two 19th century livestock causeways. Skipper’s Island is great for sea hog’s fennel, barn owl, adder’s tongue fern and flocks of brent geese in winter.  It is accessible via a private road and flooded pathways only by prior arrangement with Essex Wildlife Trust.  Visit the Essex Wildlife Trust website for more.

This is one of the few undeveloped areas of Portsmouth Harbour with saltmarsh, plant-rich shingle and an important high tide roost for wading birds.  It is great for sea lavender, golden samphire, common blue and meadow brown butterflies.  Note there is no access to the island itself, but it can be viewed from the Portchester coastline.  For more information, visit the Hampshire and Isle of Wight Wildlife Trust website.
Reclaimed from the sea in the 18th century, when a sea wall was built around the saltmarsh, Two Tree Island’s mudflats and lagoons attract a range of migrating winter birds and its grassland supports butterflies such as Essex skipper.  It is also great for saltmarsh plants, thousands of wildfowl and waders and short-eared owl in winter.  It is open at all times and accessed by road.  For more information, visit the Essex Wildlife Trust website.

This is a well-wooded island on the River Avon which provides a refuge for wildfowl in the heart of Stratford.  It’s also great for mute swans.  There is no access to the reserve, but it can be viewed easily from the tramway footbridge to the south.  For more information, visit the Warwickshire Wildlife Trust website.

This is a tiny, crescent-shaped wooded island in the River Nadder in the Salisbury suburb of Harnham.  Few have ever set foot on it to disturb its breeding birds. You'll find kingfisher, little grebe, reed warbler and sedge warbler.  Nadder Island can be viewed from the riverbank. For more information, visit the Wiltshire Wildlife Trust website.

Scottish Wildlife Trust is a member of the Isle of Eigg Heritage Trust, which manages much of the island.  Visit for panoramic views, native woodland, raised bog and moorland.  It’s also a good spot for watching  Minke whale and bottlenose dolphin.  Caledonian MacBrayne ferries for foot passengers operate from Mallaig, and during the summer a private ferry runs daily (except Thursdays) from Arisaig, stopping for whales and dolphins.  For more information, visit the Scottish Wildlife Trust website.

Cardigan Island comprises maritime cliff and grassland off the northern shore of the river Teifi estuary.  It has a long history of human use but is now only home to breeding seabirds; great for razorbill, shag, raven, rock pipit, chough and fulmar.  Access is by chartered boat from Cardigan or Gwbert only by permission of the Trust.  There are good views from Cemaes Head & Cardigan Island Farm Park. For more information, visit the Wildlife Trust of South and West Wales website.

Next to Skomer Island off the Pembrokeshire coast, in some of the most wildlife-rich waters of the UK.  Breeding seabirds, cetaceans, seals and migrant birds can all be seen here, including lesser black-backed gull, Manx shearwater, storm petrel and harbour porpoise.  Skokholm is open from April to September. Access is restricted to residential visitors and occasional Trust-organised day visits during the summer.

Skomer is well-known for its breeding seabirds and puffin colony, with sheltered bays and rugged coastline.  If you're lucky you'll see grey seal, Manx shearwater, storm petrel, chough and peregrine falcon. The island is also rich in historical remains and is covered by a carpet of bluebells each spring, even in the absence of woodland.  Skomer is open from April to September.  Passenger boats depart from Martin’s Haven - landing fees apply for non-members.  Limited accommodation is available on the island. For more information, visit the Wildlife Trust of South and West Wales website.

This island is home to the third largest colony of cliff-nesting seabirds in Northern Ireland. The birds are monitored by staff each year.  It’s good for kittiwake, guillemot, peregrine falcon, coastal otter, seals and puffin.  It is open at all times but access is for members with permission only (boat required).  Otherwise it is best viewed from the mainland, at Portmuck. For more information, visit Ulster Wildlife's website.