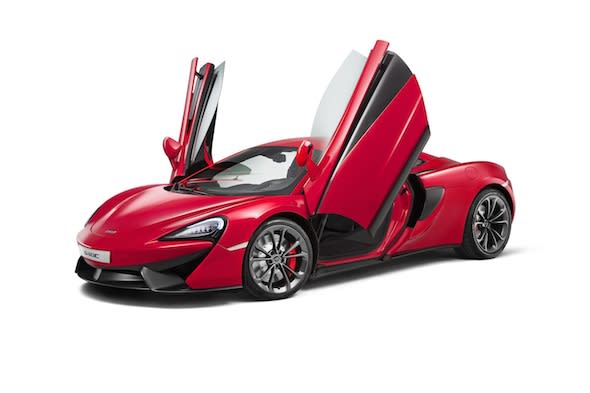 McLaren has launched a new entry-level model for its Sport Series range, called the 540C – its fourth new model to be launched this year.
This second addition to the new, less-extreme range - behind the recently unveiled 570S - is the most affordable McLaren road car yet, with a price tag of £126,000.

McLaren is hoping that the new model, which is some £17,250 less costly than the more powerful 570S, will steal sales away from sports car such as the Audi R8 and more powerful iterations of the Porsche 911.

It shares its 3.8-litre twin-turbocharged engine with the rest of McLaren's range, though in its least powerful 533bhp guise. However, mated to a seven-speed twin-clutch automatic gearbox, it's still enough to get the 540C from 0-62mph in 3.5 seconds and on to a top speed of 199mph.


Despite the prodigious performance on offer, the 540C is claimed to return 25.5mpg, while emitting CO2 at a rate of 258g/km.

Also shared with the rest of the McLaren range is the car's carbon fibre 'MonoCell II' chassis. Unlike McLaren's more extreme models, the 540C's body is fashioned from aluminium, however, rather than from the same lightweight wonder-plastic.

Despite looking nearly identical to the 570S – and much of the rest of the McLaren range for that matter – the 540C has subtle aerodynamic tweaks compared to the 570S, including aero fins under the front bumper, along with unique alloy wheels. Given its remit as a more usable daily proposition, the 540C gets retuned suspension, for a more comfortable ride than its hardcore stable mates.

Would you choose a McLaren 540C over an Audi R8 or Porsche 911 Turbo? Have your say in the comments section below.
Tags
Read Full Story