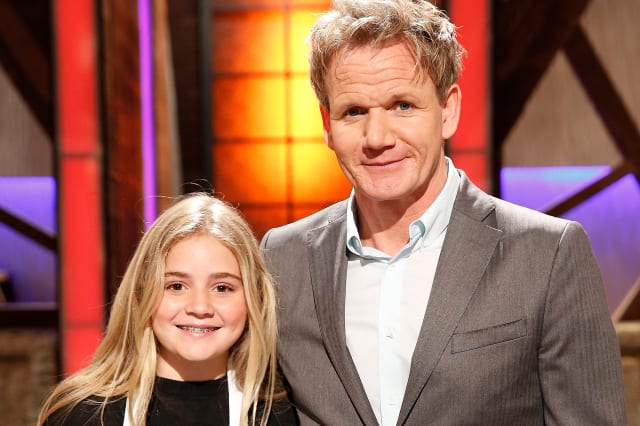 Gordon Ramsay has admitted he caught nits from a pillowcase at a hotel in Vermont, America.

The 48-year-old TV chef took part in Reddit's Ask Me Anything chat and was asked, "Have you ever literally gotten sick from a horrible hotel in Hotel Hell?"

Gordon, who fronted TV show Hotel Hell, replied: "No, I've never really got sick, but I was in a hotel last year in Vermont, and I didn't realise until I got home that I caught nits in the hotel.

The father-of-four added: "So I had my hair checked by my wife Tara, and I traced it back to the pillowcase in Vermont! So I apologised to Matilda. Because, you know, she's young and quite often kids get nits, and then my wife said 'Listen, you're wrong. Tilly didn't give you nits.'"

Reddit users responded to Gordon, with one writing: "I'm from Vermont, and I'm so, so sorry."

Another said: "Just reading a celebrity casually admit to head lice is amazingly personal and human. I always thought Ramsay would be an incredible AMA interview and he absolutely did not disappoint."

Gordon could be set to spend more time in hotel rooms after it was recently revealed he is to head up the Le Pressoir d'Argent restaurant in Bordeaux.

It is Ramsay's second restaurant in France after operating Gordon Ramsay au Trianon in Versailles.

Hen and stag dos are great when you're actually on them, but for innocent bystanders caught in the vortex, they can be a living nightmare. A guest at the Andalucia Plaza hotel in Marbella described on TripAdvisor 'drunk men, shouting, swearing and shameful behaviour. The security guard dragged one male away after he was waving his little friend around at the pool side cafe.' It's enough to put you off your chorizo boccadillo. Avoid.

For some of us (especially those of us escaping from our children), a night in a hotel is the only chance we get for a good night's sleep, so it's annoying enough to be disturbed by any noise, but when you're being kept awake by sounds of screaming and/or gunshots, it's definitely time for an early check-out. One hapless traveller staying in a US hotel was woken by the sound of voices screaming 'Open that exit! Open that exit!'. She gathered her things and fled, only to find a class of flight attendants practising emergency drills in the corridor.

Organised murder mystery weekends at country house hotels are one thing, but when you turn up at a remote hotel and the manager proudly tells you about the famous ghost that haunts the premises, you might want to pack your bags. Although, according to paranormal database.com (and we'll leave it to you to decide how reliable a source of information that is), there's a hotel in Amersham in Buckinghamshire where the ghost of an old maid will actually pack your bags for you...

Ah, the wonders of Photoshop... Many an innocent traveller has been lured into booking in to a stunning new hotel based on pictures that have conveniently erased all traces of the cranes and diggers which still surround it. One such guest recently stayed at the Ganjeli Plaza Hotel in Baku, Azerbaijan (of recent Eurovision fame) to find it 'still being built, complete with drilling at odd hours' and 'terrifying electrics'. Our top tip? Check out Google Earth to see how it really looks.

Obviously, we don't mean actual limbs (although this would, without doubt, be an indicator of a bad hotel), but when you can tell the previous guest's hair colour, nail length and type of contact lens from physical clues left in the room, leave. And don't get us started on hair. There are things that are meant to be hairy: cute dogs, Tom Jones' chest, Highland cows... and then there are things that just shouldn't. The bar of soap in your hotel bathroom is one of them.

I once stayed in a five star hotel in India to find a massive (small dog-sized) rat crouching behind my pillow. The fact that the complimentary fruit and chocolates had been nibbled by someone other than me should have been a warning. Eventually, housekeeping caught the gigantic rodent, but it didn't make for a great night's sleep.

It tells you a lot about a hotel's clientele when the establishment has obviously learnt by experience that anything not nailed down will be nicked. Like that they're probably more used to the environs of a prison cell than a hotel room. But even the best hotels are susceptible to the klepto customers - The Scotsman in Edinburgh reports clocks off the wall and coffee makers going walkabout...

Staying in the same hotel as both Rihanna and Justin Beiber (who recently stayed in the same hotel in Sydney) may sound like a pretty thrilling prospect if you're a teenage girl or boy, but for the average guest sharing a roof with a huge celebrity, it just means manic security, hassled staff, crowds of screaming press and pre-pubescents - and the certain knowledge that someone else has bagged the best rooms.

When you arrive and the leering receptionist asks you how many hours you'd like the room for, you can be pretty sure it's not the classiest hotel in the area.

The Five Fields in Chelsea is a modern British restaurant serving some of the UK'S finest seasonal and artisinal produce.

The Green Pea is a family run restaurant, cafe and gallery in Greenwich specialising in quality pub grub.

The Andover Arms in Hammersmith is a traditional British gastro pub tucked away in Brackenbury Village.

The Art of Pizza in Cricklewood serves traditional Neapolitan pizzas cooked in a stone baked oven.

Bombay Chow in Hammersmith offers a selection of Indo Chinese dishes and specialities.

Vozar's is the first cafe and restaurant in London that is fully wheat and gluten free.

The menus at Marianne Restaurant change daily using only the freshest, seasonal ingredients.

The food at the Olde Goa is cooked infront of you in this homely restaurant. The restaurant combines the distinctive laid back culture of Goa with simple,soulful cuisine.

Comedor Grill & Bar is an Argentine restaurant in Islington serving a range of classic and modern South American dishes.

Pop Art Sushi is a contemporary Japanese restaurant that offers a casual dining experience with an eclectic menu of speciality cocktails.

Omnino Steak House is a boutique steak restaurant that specialises in the art of grilling.