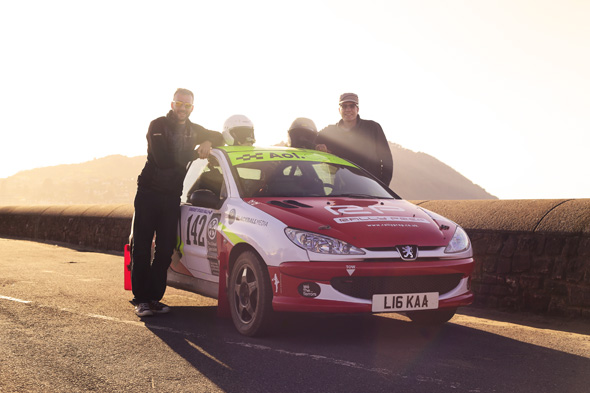 "Remind me, what do these funny exclamation marks mean again?" Not exactly the words you want to hear as you prepare to launch a car down a rally stage with career-ending drops on one side and rocks as big as a house on the other. As we sat on the start line of the 2015 Somerset Stages rally – one of the biggest forest rallies in the UK – the true reality of the situation started to dawn on us.
Ahead and behind us were crews who had spent the past two weeks poring over maps, pacenotes and videos – trying everything to build their knowledge of the stages we were about to tackle. We, on the other hand, were lining up with significantly less idea of what was to come. Although I'd watched countless hours of in-car footage from previous events and crammed the pacenotes like a student on the eve of a GCSE, co-driver James had clearly embraced the 'less is more' approach.

For those without a working knowledge of rallying, crews (driver and navigator) drive over a fixed distance (called a stage) as fast as they can. Cars start at one minute intervals and the winner is the driver who completes all the stages in the shortest overall time. Simple.

Unusually for a 'gravel' rally, the first two stages of our event took place on tarmac, namely two high-speed runs up the twisting and turning 3.7-mile Porlock Hill.

And, to be perfectly honest with you, the first run wasn't exactly Team AOL's finest hour. James lost his place in the pacenotes fairly early on and started randomly barking the words 'left' and 'right' to me regardless of what corners were coming up. To even out the incompetence, I spectacularly fluffed my first mess of the rest of the stage.

Yet somehow, our shambolic start to the event clicked the pair of us into gear. Having given ourselves a stern talking to after the finish line, we completed our second run of the stage 21 seconds quicker and headed off to the woods in a more positive state of mind.

Having eased ourselves in gently on the first two tarmac stages, the adventure really began when we arrived in Knowle woods for our first gravel stage. With our grippy slicks switched for chunky forest tyres we pitched ourselves into the woods more in hope than expectation.


If you've ever driven or sat inside a rally car on a gravel stage, you'll know that the phrase 'accident waiting to happen' is a fairly accurate description. The secret to keeping the car out of the scenery is to be accelerating or braking hard at any given point. Acceleration causes the tyres to bite into the surface creating traction, while braking forces the tread blocks into the gravel to generate grip. Lose confidence and start to freewheel and the grip switches off in an instant.

Amazingly, we reached the end of the stage unscathed. James found his groove with the pacenotes – calling out potential rally-ending hazards long before they loomed into view and giving me the confidence to push harder over the countless blind crests.

The only fly in the ointment was the car, which was enjoying the tortuous gravel stages rather less than we were. What had started the night before as a distant clunking noise from the drivetrain had developed into a much more worrying banging and vibration as we reached the half way point of the event. By the time we'd returned to our service area on Minehead seafront, it was sounding distinctly terminal.

Service crew chief and RallyPrep boss Neil Yates swiftly diagnosed the problem as a self-destructing limited-slip differential. It was then that we faced a tricky decision. Should we carry on and run the risk of a very expensive mechanical meltdown, or retire the car with the prospect of a much more affordable repair while the diff was still working and in one piece?

Given that our budget for the rest of the season doesn't stretch as far as either option, we opted for the former and the very real possibility of retirement in a blaze of glory (and gearbox internals).

And, despite an ever-increasing racket that suggested that destruction was imminent, we managed to nurse the Team AOL Peugeot 206 through the remaining five stages. And what a final five stages they were. With navigator Baggott become slicker with the notes and me becoming more familiar with the feel of a car on the brink of a major accident, we blasted through the remaining stages – easing our way up the leaderboard in the process.

Indeed, by the time we reached the finish in Minehead some nine hours after we first ventured out, we'd risen from 142nd to 81st overall. Better still, we were fourth in our class, which meant we were finally on the pace of our fellow 1.6-ers.

And the differential? Well, it hung on until the bitter end... but only just. Having completed the finishing formalities and packed the service area away, we jumped back in to drive the two miles back to the trailer park to load up for the journey home. Just as we turned into the park and onto the waiting trailer, the Peugeot's long-suffering drivetrain gave out a mournful groan and the wheels shuddered to a halt. Perfect timing...

Originally developed by motorsport journalist Denis Jenkinson to guide Stirling Moss to victory in the 1955 Mille Miglia road race, pacenotes have developed into the instructions of choice for rally crews across the world.

By using a series of shorthand instructions, a navigator can tell a driver the severity, length and speed of a corner. Watch the video below and you'll hear the corners being called, along with additional information such as the distances between corners and any other hazards such as a bumps, dips and corners that shouldn't be cut.