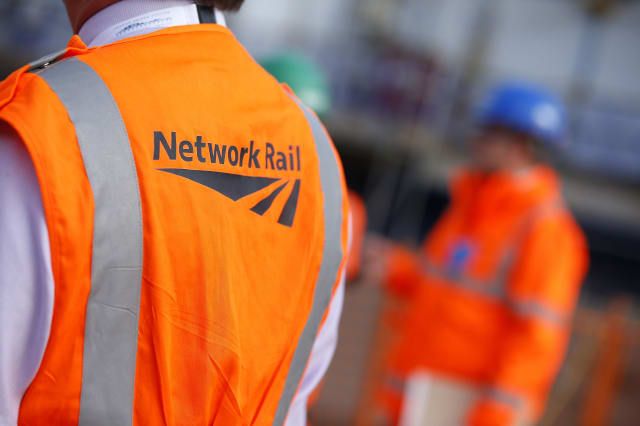 The fathers of two teenage girls killed at a level crossing have expressed their anger at being barred from a meeting where they intended to raise concerns about Network Rail (NR) bonuses and safety issues.

Chris Bazlinton and Reg Thompson had hoped to speak at a meeting of NR's public members which holds the not-for-dividend company to account in the absence of shareholders.

But according to an internal email published by the two fathers, there was "a clear steer from a majority of members that there was no desire to invite Mr Bazlinton and Mr Thompson to the April workshop". WORDS: PA.

The two fathers said members had been working "hand-in-glove with Network Rail legal and board officers to ensure that we were not given a platform to express our views".

They went on: "Basically they have indulged in dirty tricks to stop us pursuing these issues."

Olivia Bazlinton, 14, and Charlotte Thompson, 13, were hit by a train on the level crossing at Elsenham in Essex in December 2005.

Their parents fought a long battle with NR over what the company knew about safety at the crossing.

Eventually in March 2012, NR was fined £1 million after admitting health and safety offences over Elsenham, with the company's then chief executive Sir David Higgins apologising "for the mistakes made by us in this tragic case".

In January last year, the Lord Chief Justice, Lord Thomas, called for bonuses to be cancelled until safety at level crossings improved.

NR bonuses for senior executives have since been capped, but bosses can still be entitled to as much as 20% of annual salary in bonuses.

Mr Bazlinton and Mr Thompson said: "Such payments were made even after failures by the company and some of its officers in regard to safety at level crossings, resulting in many deaths including those of our daughters.

"We had hoped that members would challenge NR on these issues and to ensure action to improve safety at level crossings is speeded up."

A Network Rail spokesman said: "There is nothing Network Rail will ever be able to do or say that can possibly make up for the tragic loss of Charlie and Olivia.

"The tragedy at Elsenham was a watershed for this company and the way it approaches safety at level crossings, and members of the families have played a pivotal role in this.

"As a result of this transformation, level crossings in Britain are amongst the safest in Europe, but there is still much that can and will be done to make them safer still."

He added: "Since 2005, Network Rail has closed over 1,000 level crossings across the country and reduced the risk to the public at level crossings by more than a quarter. We're investing £100 million over the next five years to improve crossing safety further, and aim to close hundreds more crossings.

"This work is being led by a team of over 100 specialist level crossing managers, with the support of everyone in the business including our level crossing user champion, Olivia's mother, Tina Hughes MBE.

"Network Rail has apologised publicly and privately for its role in this accident. David Higgins, our previous chief executive, met with the families of both girls and apologised personally on behalf of the company.

"Last year our current chief executive, Mark Carne, apologised unreservedly to the families and friends of all those whose lives have been affected by the company's past failings in managing public safety at level crossings. He did so in the full glare of the media to ensure the apology reached as many people as possible and has now followed this up by writing to the families of Charlie and Olivia to make that apology to them personally."

In 2012 Bassetlaw Labour MP John Mann criticised NR after the death of Emma Lifsey, four, at a level crossing in Nottinghamshire.

Today Mr Mann called for an incoming Labour government to "scrap the feather-light oversight of the part-time public members" at NR.

He went on: "As a body, these part-time members have simply failed to rein in the executive directors at a firm which receives some £4 billion a year from the taxpayers and is now currently investing £38 billion of our money in a five-year investment programme.

"They have simply failed to hold them to account on safety, the latest example being their callous treatment of both Chris Bazlinton and Reg Thompson.

"These box-ticking shrinking violets seem more worried about upsetting the well-paid executives than doing their duty by the travelling public."

Mr Mann added: "And there is no evidence at all that they have even discussed the Commons Transport Select Committee's damning report on level crossing failures which was published a year ago."